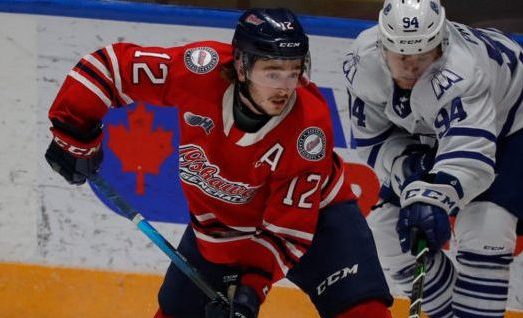 Revenge for the Oshawa Generals is a dish best served four days cold.

The club took on the league-leading Mississauga Steelheads at the Tribute Communities Centre last night for the second time this week and came away with a thrilling 4-3 shootout victory to move into a tie for second place in the East Division.

The Generals dropped a 3-1 home ice decision last Sunday to the Steelheads, who are the first team in the OHL to reach 50 points on the season.

Mississauga got on the board early when Luca DelBelBelluz scored just 30 seconds in, but Oshawa tied it just under seven minutes later on a goal by Lleyton Moore and took the lead with 34 seconds left when big Belarussian defender Nikita Parfenyuk’s point shot found its way past Steelhead goalie Roman Basran.

Once again, Mississauga would waste little time before finding the scoresheet, as a broken play 1:35 into the second period behind the Generals net led to the puck bouncing off rookie Owen Beck and into the net, tying the game 2-2.

But once again the Generals responded to regain the lead heading into the final frame. This time, a give-and-go between Brett Harrison and Cameron Butler ended with the puck lying in the crease, and Oshawa rookie Calum Ritchie – who set the league on fire in the first week of the season but hasn’t scored in a month – was there to bang it home for his 12th of the season.

Oshawa goalie Patrick Leaver, who was outstanding in the shootout, had to be on his game in the third as Mississauga peppered his net looking for the equalizer, finally finding it when Max Dodig was left alone in the slot and scored his third of the season to make it 3-3 with just under six minutes to play. Dodig also scored on Sunday night in the Steelheads 3-1 victory.

“The first couple goals were a little disappointing, I had to forget about them quickly,” Leaver said after the game. “The boys in front of me were playing great, and I just kept battling.”

Overtime solved nothing, with Oshawa having the best chance when Harrison walked in alone on a breakaway, and the shootout required five rounds before Ryan Gagnier trickled one over the line for the eventual winner.

Mississauga had two chances to win it but was denied each time by Leaver.

“The guys stuck with it all game long and deserved the win here tonight,” Oshawa coach Todd Miller said post-game. “Leaver was excellent, and our defence played great, especially considering we are missing a few regulars back there.”

With the win, Oshawa’s record is now 17-12-3 and the Generals will now travel to Sudbury to battle the Wolves tonight before returning home to host the Kingston Frontenacs Sunday night.

Mississauga (23-7-4), extended their point streak to ten games with the shootout loss point. The Steelheads are in action tonight at home against Peterborough.