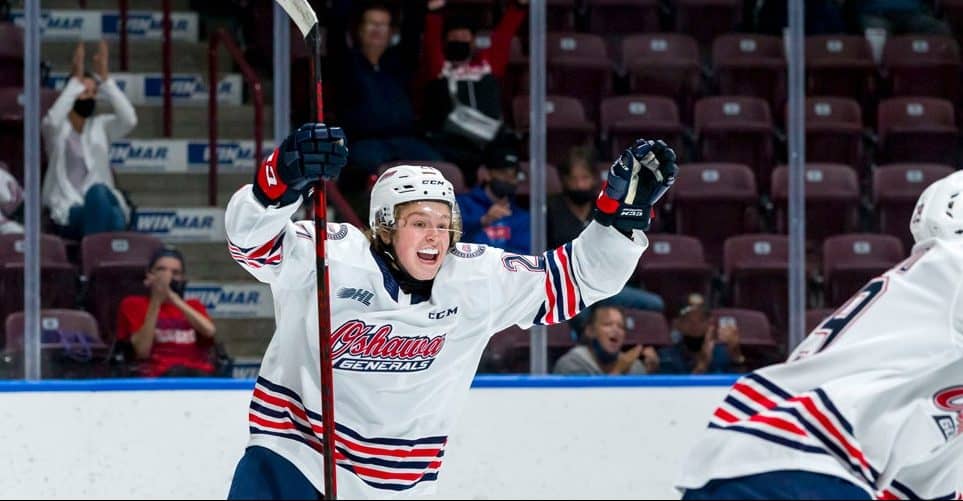 Ryan Gagnier on a tip-in, rookie Beckett Sennecke on a nice goal-mouth feed from Stuart Rolofs, Sennecke returning the favour with a nifty pass to Jordyn Ertel and Luca D’Amato from a sharp angle and the Oshawa Generals are up 4-0 and seemingly cruising to victory in front of a boisterous home crowd Wednesday night.

Then, as has happened on more than a couple of occasions this season, the bottom fell out for the struggling club as the Kingston Frontenacs scored five straight goals – three in a minute-26 at the end of the second period – to take the lead.

Calum Ritchie, with his 11th of the season on the power play with 4:35 to go, gave the Generals hope of salvaging some pride from the game but the Front’s Paul Ludwinski – a Pickering native – scored on a brilliant individual effort to re-take the lead and Kingston added an empty-netter in the dying seconds to seal the comeback 7-5 win.

Oshawa is now 11-15-4 and holds just a three point lead on the Sudbury Wolves – who hammered Oshawa 7-1 just before the Christmas break – for the final playoff spot.

Oshawa is back in action in North Bay for a matinee New Year’s Eve game before returning home Sunday to face the Peterborough Petes on New Year’s Day at the Tribute Communities Centre.