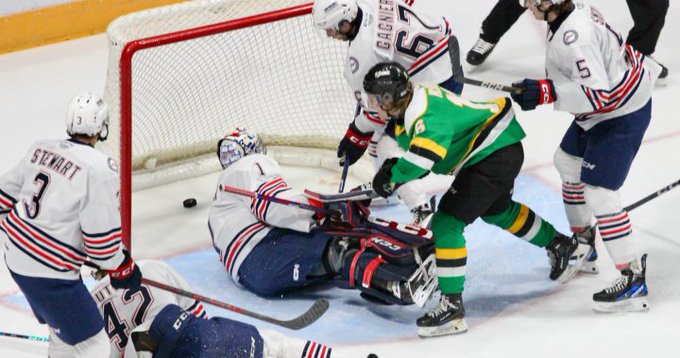 After snapping a nine-game losing streak Friday the Oshawa Generals could use a streak going the other way but the London Knights had other ideas, holding off a furious third period rally to take a 4-2 road victory.

The Knights jumped out to a 2-0 lead early but Oshawa battled back to tie it before two Generals collided in their own zone with just over a minute remaining in the second, leading to a 2-on-oh breakaway the other way and a 3-2 London lead.

The Generals peppered London goalie Brett Brochu in the third – Brochu faced 36 shots in total – but held the fort and the Knights added an empty net goal to seal the victory.

Dylan Roobroeck and Cam Butler scored for Oshawa (6-12-3), who go on the road to play Windsor Thursday night, Sarnia Friday and Hamilton Sunday night with head coach Derek Laxdal uncomfortably in the hot seat in his first season behind the Generals’ bench.