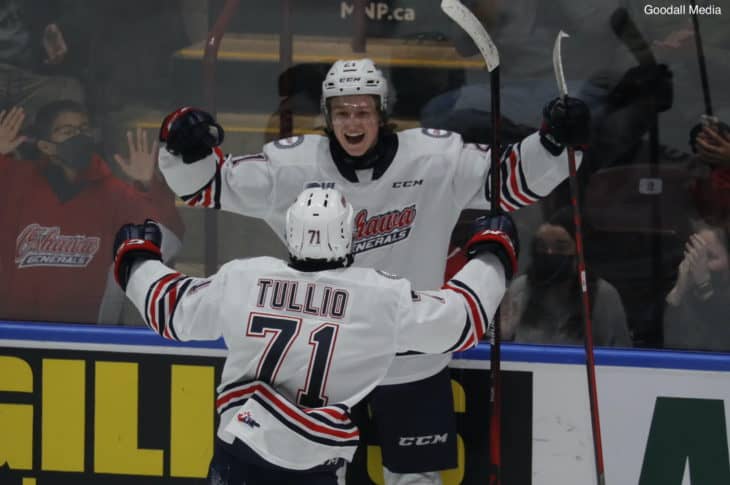 Red-hot rookie Calum Ritchie has been named the Ontario Hockey League’s Player of the Week.

The Oshawa Generals’ prize prospect – picked second overall in the 2021 minor midget draft – led all scorers with seven points in three games and was plus four. Ritchie capped the week with a four-point night – two goals and two assists – as the Generals trounced Peterborough 6-3.

The 16 year-old, who has scored in all five games this season, is now second in league scoring (to Jack Thomson of Sudbury) with nine points and tied with teammate Ryan Stepien for the goal-scoring lead with six. The last time a Generals rookie had a five-game goal-scoring streak was John Tavares in January 2006.

Ritchie, a graduate of then Oakville Rangers U16 program, is the first Oshawa player to claim Player of the Week honours since Phil Tomasino in January of 2020.

In other Oshawa Generals news, NHL Central Scouting has released its ‘Players to Watch’ list for the 2022 NHL Draft and one General made the list.

Two OHL players – including Kingston forward Shane Wright, who some scouts have as the potential number one selection – were give ‘A’ ratings as probable first round picks. Another dozen were given ‘B’ marks for second or third round potential and a further 43 players were graded ‘C’ for their likelihood of being taken in the third through sixth rounds of the draft.

Oshawa forward Daniel Michaud, who has three points in five games to start the season, was given a ‘C’ rating.