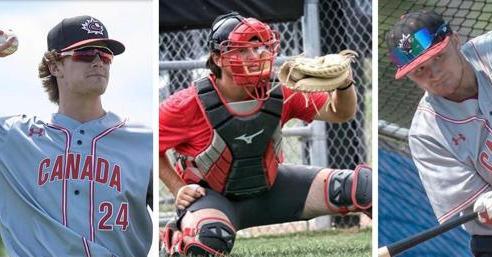 Three former Oshawa Legionaires and four players from Peel and Halton regions are among 30 baseball players selected to represent Canada in a seven-game Friendship Series against the United States’ 18U national team beginning this weekend.

The games will be played in Sarasota, Bradenton and St. Petersburg, Florida.

The roster was selected following a Junior National Team Training Camp held at the Ajax Sportsplex from August 18 – September 2 where 38 athletes participated in daily practices and intrasquad games.

With the postponement of 2021 WBSC U-18 Baseball World Cup in Florida to 2022, the Friendship Series will be used as a final event for the 2003 age group with the start of the next Junior National Team program cycle (2021/2022) beginning with the Fall Instructional League Camp in Florida this October.

“We’re extremely fortunate to be able to provide our players with an international baseball experience given the difficulties of running our program over the last 18 months,” said Junior National Team Head Coach and Director of Men’s National Teams Greg Hamilton. “Our players will be challenged against a formidable opponent in the United States, and we look forward to the opportunity of competing and representing Canada down in Florida.”