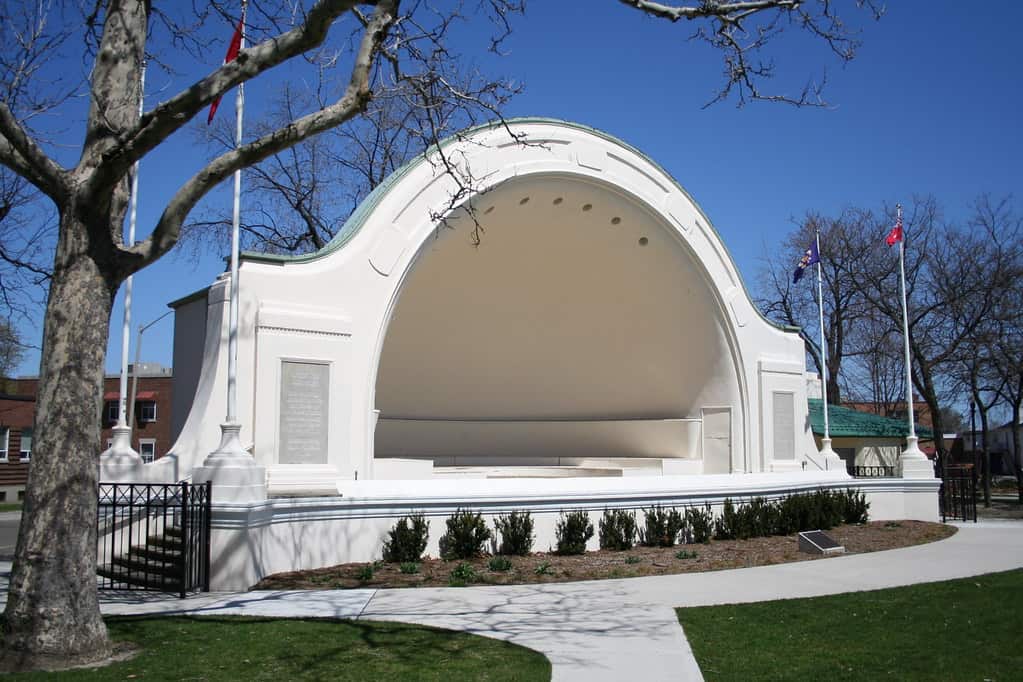 “Get the best architect, build the Bandshell and send me the bill.”

Those words, coming from General Motors of Canada founder, noted philanthropist and Oshawa icon Colonel Sam McLaughlan in 1942, were all Reg Martyn and other members of the Ontario Regimental and Civic Band needed to hear.

It was wartime and the band, which was rehearsing in the Orange Hall over a grocery story until the army commandeered the band’s practice room for medical inspections, was looking for a permanent place. So they approached McLaughlin about the idea of building a bandshell in Memorial Park in the city’s downtown.

As the story goes, Martyn got plans for the bandshell from the Con Music Company in Indiana and handed them over to architect Harold Smith and a somewhat new company called Bathe and McLellan (who are still in business in Oshawa today) got to work building it.

No one is sure how McLaughlin got his hands on the structural steel needed for the job in the middle of wartime restrictions, but they didn’t call him Colonel for nothing and the bandshell was completed, at a cost of $18,000, in July 1942. 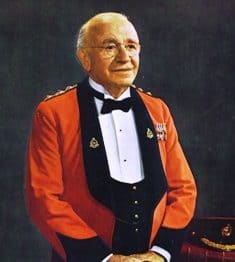 Col. Sam McLaughlin in the mess uniform of the Ontario Regiment.

It was then, and remains so today, 80 years later, the cultural hub of the City of Oshawa.

Many home-front, morale-building celebrations during the war were held in the park with the Bandshell as the centre and it has been home for many a concert and many a celebration, as well as the summer concert series for the band, now known as simply the Oshawa Civic Band, which is still going strong today.

The Bandshell is a wood and steel structure, now with a cream colour finish accented with grey moulding. The overall shape is winged with memorial tablets mounted on the front face at each side of the stage. The roof extends east in a series of semi-circular tiers or hoods, each diminishing in size from the adjacent one.

The stage opening is semi-circular and can be accessed from a rear stage door or mounted at the front by north and south stairways. Most importantly, the acoustics of the Bandshell are considered outstanding.

Facing west to Centre Street South, the structure was equipped with a band room, special lighting effects and amplifying equipment, with a stage that could accommodate 125 performers. In the 1950s, demand for the Bandshell increased and the Oshawa Civic Band outgrew their band room, originally built under the stage. McLaughlin helped finance the construction of a bigger band room at the back of the structure.

A raised brick and timber bordered amphitheater and other landscaping was completed in 1977.

A set of murals on the east side of the structure, painted by John Hood of Toronto, were added in 1996, depicting the then-130 year history of the Ontario Regiment. The great racehorse Northern Dancer, winner of the Kentucky Derby and Preakness Stakes in 1964, is also mural-lized on the bandshell, along with jockey Bill Hartack and legendary industrialist and newspaper and beer baron E.P. Taylor, who had bought Windfields Farm from fellow tycoon and racing fan McLaughlin in 1950. The mural was painted by David Yeatman of Aylmer, Quebec.

Another mural that can be viewed looking north from Memorial Park is along the Metcalfe Street façade of the Oshawa Public Utilities building. The mural portrays spy school Camp X, where 500 secret agents were trained by the Man Called Intrepid, Sir William Stephenson, during WW II. It was painted in 2001 by local artist Tony Johnson and is one of 15 or so murals commissioned in 1993 that are scattered all over the city.

Memorial Park, which predates the bandshell by just 18 years, is also home to the War Memorial, which was unveiled on Remembrance Day 1924. The memorial, the site for every Remembrance Day since, is built from stones from every allied nation of the First World War, as well as from the battlefields on which Canadians fought. 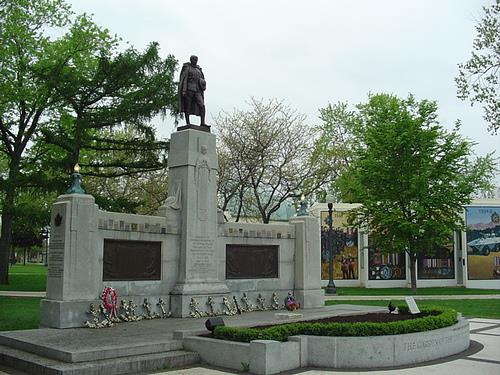 Prior to the park’s establishment, the site was occupied by St. George’s Church from 1852 to 1924 and it was also the second site of the Pedlar People factory, which operated at the corner of Simcoe and Metcalfe from 1892 to 1920. Today there is a plaque in the park commemorating the factory and the role of Pedlar People in Oshawa’s industrial history.

Today the Oshawa Bandshell, a gift from Colonel Sam, is the gift that keeps on giving. With the pandemic in decline and people returning to live concerts in the park, the Oshawa Civic Band – a British-style brass band which traces its roots back 1866 and the Regimental Band of the 34th Ontario Regiment – continues to entertain residents and visitors every Wednesday evening throughout the summer.

The first-ever concert at the structure was July 24, 1942 and the band will celebrate the 80th birthday of the Oshawa Bandshell on July 20, 2022, featuring mezzo-soprano Kristine Dandavino.

With thanks to the Memorial Park Heritage Research Report, prepared by Melissa Cole, Heritage Consultant, for the City of Oshawa. December 7, 2016.