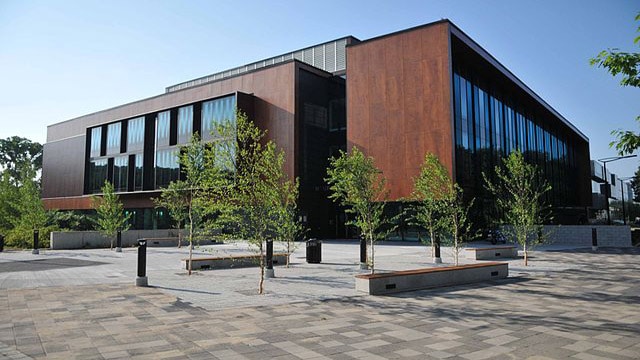 Thanks to a very (very!) generous donation from the Mississauga-based Orlando Corporation, the University of Toronto Mississauga (better known as UTM), has launched an interdisciplinary centre for the development of new drugs targeting cancer and other diseases.

The laboratory of Professor Patrick Gunning (of UTM’s Department of Chemical & Physical Sciences) inspired the creation of the Centre for Medicinal Chemistry. Right now, Gunning and his team design lead compounds that could potentially be turned into cancer fighting drugs. Now, the core team of the new centre will include Gunning and experts in medicinal chemistry, computational chemistry, cancer biology and stem cell biology. Ideally, the compounds created will revolutionize cancer treatment by interrupting “specific biochemical processes while avoiding harm to normal cellular function.”

“On behalf of the entire U of T community, I would like to thank Orlando Corporation for this extraordinary gift,” says Meric Gertler, president of U of T. “It will add more new talent to the brilliant team led by Professor Gunning, propelling them towards breakthrough innovations with the potential to save countless lives.”

Gunning’s research team has also received $5.9 million in funding from the Canada Foundation for Innovation and the Ontario Research Fund.

In a statement released by UTM, Professor Ulrich Krull, interim vice-president and principal of UTM, said that the centre will play a “transformative role” in Canada and the world by becoming a research hub frequented by leading Canadian scientists who are dedicated to finding more innovative ways to fight cancer and other diseases.

Gunning’s team has already moved four lead compounds to advanced pre-clinical trials. With this grant, the team should be able to work even faster.

“I am profoundly grateful to Orlando Corporation for this incredibly generous investment,” Gunning says. “Through this gift, we have a unique opportunity to dramatically scale the work that has already taken place in our efforts to develop life-saving drugs, and in doing so, also train a cohort of highly-skilled talent in the life sciences.”

Here’s hoping our very own university will be front and centre in developing new and effective cancer treatments!