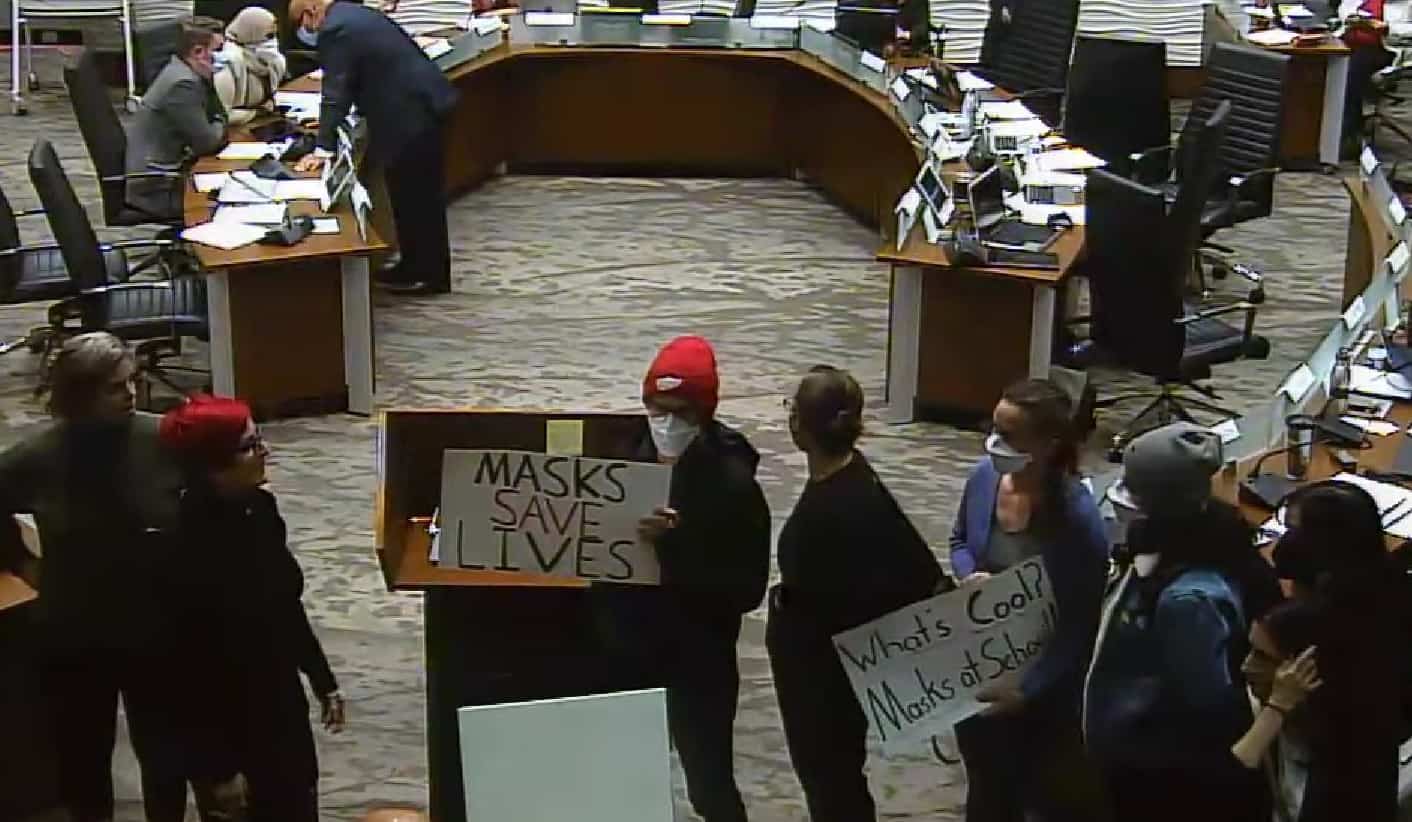 It took a raucous 3½-hour meeting, an order to clear the gallery, and careful wording before the largest school board in Hamilton made masking the standard in classrooms — during a pediatric health crisis.

The Hamilton-Wentworth District School Board is believed to be the first board in Ontario to do so, even though McMaster Children’s Hospital has a surge in child patients suffering from respiratory viruses and its Ottawa-area counterpart is so similarly swamped that it is accepting staffing help from the Canadian Red Cross. By a 9-3 vote late Monday night, HWDSB trustees approved a motion by Wards 5 & 10 trustee Todd White for a “temporary universal masking requirement with an unrestricted option to opt out.” It would be put in place starting Monday (Dec. 12) for the last two weeks before the holiday break, and would be “renewable” at the next board meeting in January.

White introduced the motion as a revision to one introduced by Ward 15 trustee Graeme Noble. It was put on the floor about 15 minutes after HWDSB Chair Dawn Danko had the gallery cleared of onlookers, who regularly heckled trustees who were in favour of masking and wildly applauded trustees who spoke against it.

The original motion by Noble used the term “temporary universal masking standard” and allowed for cases of “written medical exemptions on the basis of documented disability.” There were concerns from trustees and staff about violating medical privacy.

“I take no credit for this motion — this is derived from information taken from the work Trustee Noble put in over the last two weeks (since the last HWDSB meeting on Nov. 21),” White said. “This will allow staff to operationalize and it respects parent choice.”

White also alluded to earlier comments by Ward 13 trustee Paul Tut, who noted that respiratory transmission — as witnessed in the first two full winters of COVID-19 — increases in December and January.

“The difference is that this is an opt-out approach versus the opt-in that we presently have,” White added. “What inspires me the most, we are the only elected officials with students with their primary mandate. We know we have a pediatric crisis in our Hamilton community. Many of these children who are affected are our students and I feel we have a responsibility to do this.”

Since March, the Ontario government, whose decision-maker is Chief Medical Officer of Health Dr. Kieran Moore, has said masking should be an individual choice, and mandates should regional. None of the 34 public health units, though, have acted. Hamilton Public Health was invited to send a representative on Monday night, but no one materialized.

About 60 people from the community, including parents who brought children holding signs with messages such as “Masks made me sick” and “You’re not my mom,” showed up to the meeting. Danko issued repeated reminders not to heckle speakers.

The Hamilton Health Sciences hospital network, which includes MCH, has seen 140 per cent occupancy recently. Some children who have either respiratory syncytial virus (RSV), flu or COVID-19 have been admitted to the hospital even though there is no bed for them.

“The provincial government’s made it clear they’re not going to help,” Tut said. “Public health has not helped except to provide data… there is a local need. We have a health-care system in crisis, no bones about it.

“If we just did just a little something to help those who are on the front line, to show a little bit of courage, what could we do?” Tut added, drawing jeers.

“We’re not asking for a mandate, we’re asking for improvement by calling it a quote-unquote requirement,” Danko said during the debate on White’s motion.

There were no speakers against the revised and adopted motion. During the first three hours, Dahab referenced a recent New England Journal of Medicine (NJEM) study from the Boston area about lifting masking mandates. The NEJM study found that, over a 15-week period, there were about an additional 45 COVID-19 cases per 1,000 students and staff directly linked to lifting the mandate.

During that stage of the evening, Buck called a masking requirement “well-intentioned” but doubted it would do any good.

“There’s nothing limiting transmission in other space,” she said. “I do fear there will be unintended consequences, such as more stress for our staff.”

The gallery ran out of last chances at 10:13 p.m., while Miller was speaking. Miller was speaking about how her 5-year-old daughter has a speech impediment, in the context of how being part of a school community during a global pandemic involves sacrifices.

“We know that she’s probably gone a little longer having a lisp because of masks,” Miller said. “But if it means the protection of her peers, the protection of folks who are immuno-compromised, I’m willing to work with my partner on that… Everyone, as adults, as families, we do have to make these choices. We know this is likely not going to get us to 100 per cent masks. It (the HWDSB motion) still has personal parent choice. You have to read it to look for it.”

Shouting erupted, and Danko ordered the gallery cleared. A handful of people had already been ejected. During the meeting, HWDSB provided a viewing gallery on the main floor of its offices, and also live-streamed on YouTube instead of meeting through the less universally accessible Microsoft Teams.

The HWDSB kept a mask mandate later than the rest of Ontario last spring before removing it in April. Miller pointed out that the Ontario Ministry of Education still recommends masks, and notes that private businesses also have that option.

“I got a note from my daughter’s ballet instructor that masks are mandated in her studio,” Miller said. “It’s notable that the ability of the private sector to make policies is in such stark contrast with what we as public leaders are tasked to do.

“We know how the conversation has gone, as it’s been highlighted at the most important table, the Ministry of Education, even though they recommend maks. People, they forget their recommendation, still, is that we all wear masks.”

Mahmoud, a student trustee, said that HWDSB pupils had a nuanced approach to a masking requirement. They didn’t like the idea of it, but understood the logic of protecting younger children, the elderly, and the immunocompromised.

“I saw a room of 12- and 13-year-olds displaying such compassion for those who are vulnerable,” Mahmoud said.

The teenage student trustee, who is legally a child, was also booed by those in the gallery.