CAUGHT ON VIDEO: OPP search for tow truck driver after hit-and-run in Mississauga 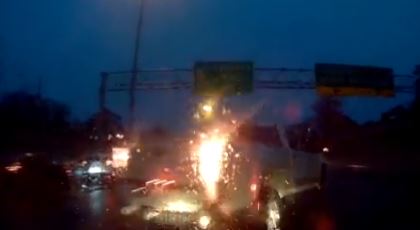 Police are on the hunt for a tow truck driver involved in a hit-and-run in Mississauga on Sunday.

In startling video captured on dashcam, a white tow truck can be seen backing up across the eastbound lanes of the QEW near Hurontario St.  in Mississauga on Sunday just after 6:00 p.m.

Footage of the incident which shows an oncoming vehicle crashing into the rear end of the truck.

Officers from OPP Highway Safety Division say the tow truck took off after the crash, and police have released the dashcam footage in the hopes that members of the public can help identify the driver.

Tow truck reversing on the #QEW/Hurontario- Sun Nov 14 – 6pm.
The tow truck was trying to cross the highway to solicit tow services contrary to the HTA.
After the crash, the tow truck driver fled.
Call #MississaugaOPP at 905-858-8670 if you can help identify the truck/driver. pic.twitter.com/KphCRm1SPQ

Anyone with information about the incident is asked to the Mississauga OPP at (905)-858-8670. You can also contact Peel Crime Stoppers anonymously at 1-800-222-TIPS (8477) or by visiting peelcrimestoppers.ca.