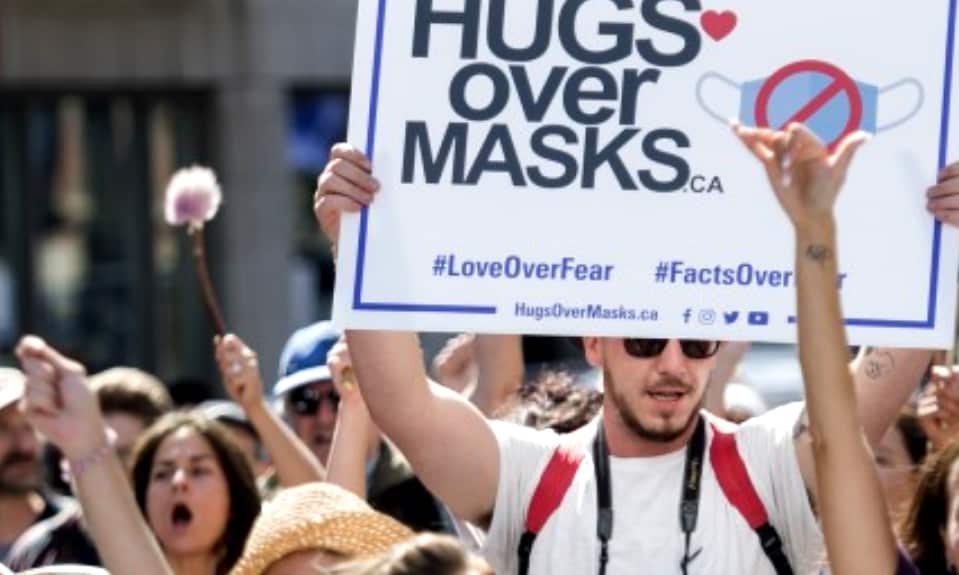 We get it, guys — COVID times suck. No one, not even pro-maskers, should pretend otherwise. Having to wear a mask, socially distance, and do everything online isn’t fun, it’s just something we find ourselves having to do until this pandemic is over.

Unfortunately, it seems anti-maskers understand the first part but don’t understand that their actions could, at worst, just prolong the situation we’re currently in.

For example, whether or not you agree with the provincial government’s new restrictions, it’s the rising number of daily COVID-19 cases (over 400 for two days in a row now) that’s led the government to roll back the number of people allowed at private social gatherings.

Some of you may disagree with this premise. Others might agree but think, “So what? Anti-mask protests are more of an American thing, aren’t they?”

While we’ve definitely seen some interesting news of large-scale anti-mask gatherings in the U.S., we’ve got our fair share of them north of the border too — such as Hugs Over Masks, an anti-mask group that reportedly meets every Sunday at Jack Darling Memorial Park in Mississauga.

Holy guacamole!! What an amazing first day for our new Mississauga/Oakville chapter! So many incredible people gathered together ready to ACT and support each other!! #covidisover #stand4THEE #yahoonation Let's do it all over again next week!

The group espouses ideas such as “Love over fear” and “Freedom is essential” which sound nice on their own, but their actions come off as tone-deaf at best, and at worst might directly result in a lot more people getting needlessly sick.

The group also seems to deny the potential safety benefits of wearing a mask, with some of them going as far as to compare “the new normal” to communism (because who can forget when Stalin killed eight million people by forcing them to wear face coverings?).

Of course, certain exemptions should be made for anyone who would have difficulty wearing a mask (such as very young children and people who have difficulty breathing), but that’s a bit different than protesting against masks in general.

While the idea of protesting something meant to keep people safe might seem a bit unique to our times, a quick glance at history tells us it’s actually not that uncommon. In fact, some of the older generation might remember when there were protests against a common, now uncontroversial item that many of us use everyday: The seatbelt.

According to an article from Business Insider, many people in the U.S. weren’t happy with this newfangled safety feature in their automobiles. Most cars didn’t actually come with seatbelts until the mid-1950s, and it took until 1984 for New York — soon followed by other states — to pass a mandatory seatbelt law due to the high number of vehicular fatalities.

In response, some Americans cut the seatbelts out of their cars, while others challenged seatbelt laws in court.

“Massachusetts radio personality Jerry Williams transformed his talk show into a crusade against seat belts, gathering 45,000 signatures in three months. He managed to get a referendum on the ballot to repeal the state’s new belt law,” says Business Insider.

The situation wasn’t much different here in Canada, according to CBC. For example, only 28 per cent of Albertans used a seatbelt before it became law, and changing the minds of almost three quarters of motorists proved to be a difficult affair.

The point of the comparison is that it’s not unheard of for people to protest something that’s new and somewhat scary, even if it ends up being good for them in the long run (though unlike seatbelts, I’m sure most of us would be happy to never have to wear a mask again once the pandemic is over).

Will future generations look back at anti-maskers the way we look back at people who protested seatbelts? Only time will tell.

The bottom line: If you don’t like having to wear a mask then that’s fine, but if you’re going out and you’re going to be in close contact with random strangers, show them a little courtesy and put one on. It won’t be the end of the world, we promise.

Do you agree or disagree? Let us know what you think in the comments.