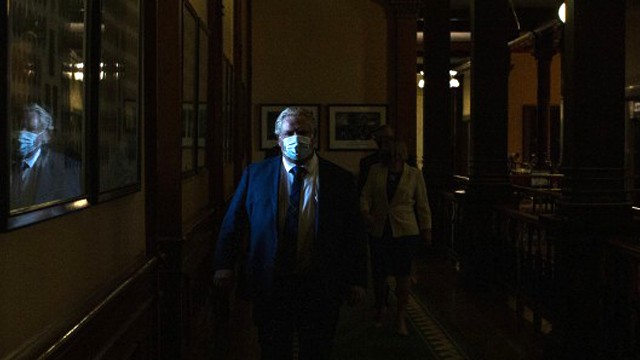 On May 13, embattled Premier Doug Ford started off his press conference on a bright note: With just a few more weeks of strict public health measures, we can enjoy a “relatively normal” July and August.

Then Ford began hammering an election-ready talking point meant to drive home a narrative that the Ontario government is desperate to put forward: That this horrific third wave is 100 per cent the fault of the federal government (and maybe a few other “yahoos,” but more on that later).

While there is merit to Ford’s concerns about travel-related cases, the constant deflection and weeks-long proclivity to blame everyone from parkgoers and shoppers to wealthy travellers “flying into Canada on private jets from Hawaii” is tiresome and insulting.

At the press conference, Ford even tried to blame ongoing school closures on “injunctions” that teachers unions are purportedly threatening to file–something the presidents of two major unions have flat-out denied.

To be clear, the federal government’s current hotel quarantine program needs a significant overhaul. It came too late and does too little to stop travellers (largely Canadian citizens and permanent residents returning from abroad) from bringing COVID-19 into the broader community.

Pearson Airport in Mississauga recently saw 14 new flights with COVID-19 cases, nine of which landed at the airport and five which departed. According to the federal government’s data, there were 10 domestic flights (within Canada) arriving at or departing Pearson between May 5 and 8.

In that same timeframe, there were four international flights, three of which landed at the airport from abroad. At least 89 rows were affected across all 14 flights, with some flights reporting unknown rows.

We know that travellers can skip the mandatory three-day (minimum) hotel quarantine by paying a fine and we know that once someone has left the airport, it can be extremely difficult to confirm whether or not they are isolating at home. The federal government should be–and should have been–much more aggressive with its travel restrictions. While some people would grumble, most would feel reassured knowing that no one but the most essential workers are entering the country. People would also feel safer knowing that travellers are being all but locked into hotel rooms for 14 days upon return.

A stricter hotel quarantine program could absolutely have a positive impact, no question.

But for the Ontario government to act like it was completely powerless to stop or mitigate the third wave is deeply insulting to the intelligence of every resident–especially residents of Toronto, Brampton, Mississauga and Caledon. The residents of those municipalities have been living under public health restrictions since October 2020 and Mississauga’s mayor does not expect the ban on indoor dining in the city to be lifted until September.

The Ontario government ignored pleas from local health experts–including the medical officers of health in Toronto and Peel–and refused to provide paid sick days to essential workers for literal months.

The province stubbornly waved away concerns, telling workers to apply for a federal benefit that it was repeatedly told did not go far enough. The premier and his government ignored the calls for help for workers despite the fact that Peel, one of the hardest-hit regions in the country, has reported over 500 workplace outbreaks since the start of the pandemic. Close to 36 per cent of all workplace outbreaks in Peel have occurred in the manufacturing and industrial sector–a sector the government refused to crack down on, citing “supply chain” issues.

After months of begging and record hospitalizations, the Ontario government relented by offering three–just three–paid sick days. Toronto, Peel and Hamilton have had to take matters into their own hands, with their medical officers of health using their Section 22 powers to shut down any non-essential workplaces with even a small amount of cases for a period of at least 10 days.

“[Doug Ford] continues to assert that tightening federal borders will help drive Ontario’s case counts down much faster. In the last week, just 318 of 25,001 (1.3 per cent) of COVID19 cases in Ontario were travel-related,” Stall said in a tweet.

“This is nothing but a distraction.”

Stall said the third wave has much more to do with the province’s rush to reopen too soon when case counts were still high.

“[Doug Ford’s] claim that Ontario’s [third] wave of COVID19 was driven by our porous borders is simply untrue—this was caused by reopening in early February against scientific advice.”

Dr. Michael Warner, a physician who works in Toronto’s Michael Garron Hospital, said his sickest patients did not contract COVID from travel.

“Of the > 30 people I have seen die of COVID in ICU and >100 I have treated with this disease, none had returned to Canada on a private plane…or any plane for that matter,” Warner tweeted on May 13.

“Most got COVID at work, from a close contact or due to lack of access to timely vaccination.”

Ford might not have the power to ban people from leaving or returning to Canada (and it’s worth noting that non-essential travel into the country has been prohibited for over a year now, so the virus isn’t being spread by tourists excited to get a ticket for drinking White Claw in Trinity Bellwoods), but he’s 100 per cent responsible for mitigating spread within Ontario’s borders.

Since February, the province has rushed to reopen (and then close) small businesses, frustrating residents and putting immense strain on the restaurants, shops, salons and other small operations that have borne the economic brunt of this endless, hopeless crisis. The province’s reluctance to target workplaces that spurred thousands of cases put pressure on Ontario’s health care system.

The ICUs filled up not because some fabulously wealthy mogul flew his private jet to Pearson or because people ate dinner on the Mississauga patios that the province opened. ICUs became overwhelmed because the province did not temporarily close non-essential warehouses or factories, offer sufficient paid sick days to workers who are literally dying to package Amazon orders or divert the lion’s share of vaccines to hotspots until it was too late.

A few weeks before turning his attention to the feds, Ford tried to blame spread on Yorkdale shoppers and people in parks and playgrounds. He said that when he was “driving around,” he was seeing too many people on patios. His government is still sticking to useless restrictions on outdoor activities in a bid to “limit mobility,” arguing that golf isn’t safe because golfers will clandestinely meet up after the game to “have some pops.”

Fortunately for us, the tide appears to be turning. Cases are dropping and the pressure is slowly coming off the health care system. The vaccine rollout has picked up steam and every Peel resident who is 18 or older can book their first shot.

We are emerging from this awful crisis.

That said, we’re not out of the woods yet and the last thing we need is a barrage of obnoxious and misleading talking points about tourists and private jets and golfers drinking pop. We need a refined vaccine rollout targeting our most vulnerable residents in our hardest-hit areas. We need reasonable, scientifically sound public health measures that will ensure we can enjoy relatively safe activities (such as golf, tennis and basketball) while awaiting a significant improvement in cases that will allow for more businesses to finally reopen (and hopefully for good).

We don’t need to hear our premier imply that nothing is his government’s fault. Finger-pointing is childish and at this point–14 months into this endless crisis–we don’t need to hear that someone else is purportedly more at fault for the situation we’re in. We need the people with the power to fix this, to fix it.

And do it now.