It's what's best for the Hamilton community as a whole. The economic and safety benefits of a two-way Main Street conversion outweigh the longer drive.

When Hamilton city council passed a motion last week to convert Main Street from one-way to two-way, a segment of the population erupted with concern over further traffic congestion on one of the city’s most used roads.

As someone who uses Main Street daily, I can empathize. Who doesn’t enjoy seamlessly driving down a major road with synchronized traffic lights? However, the job of our elected officials is to make decisions that take into consideration the community as a whole. The economic and safety benefits of a two-way conversion far outweigh the few minutes added to our commute.

The reasoning behind the conversion motion from councillors Maureen Wilson and Nrinder Nann was road safety. Main has a disproportionately higher accident rate compared to other streets, and 2022 has especially been deadly for pedestrians in Hamilton. The city reached double-digit pedestrian deaths within a span of a few months when Hamilton has typically averaged around four per year.

Main has been a one-way street for decades, why is this now a problem?

The question is valid, and frankly, no one really knows for sure why this year has been particularly tragic. In fact, Hamilton appears to be part of a larger trend with the province seeing a historic level of carnage on its roads. But perhaps the better question is, why do we still have one-way streets? And how does a two-way street conversion on Main benefit the community as a whole?

Get in, get out

The explosion of automobile use post-WWII led to people moving further from downtown centres and into suburban communities. Downtowns operated predominately as a place of work and as entertainment districts, meaning streets were designed with the goal of moving people in and out as quickly as possible. This is no longer the case.

Hamilton has joined the many other North American municipalities in reimagining its downtown neighbourhoods as vibrant, walkable, livable communities. A four or five-lane highway — albeit with a lower speed limit — just doesn’t fit Hamilton’s downtown vision.

According to a study titled Downtown Streets: Are We Strangling Ourselves on One-Way Networks?, “one-way streets have a negative impact on storefront exposure for those businesses highly dependent on pass-by traffic.” When a vehicle slows down or stops at an intersection, the driver has a great view of the storefronts around them. Storefront exposure can be lost when one direction of travel is removed.

In one example, 40 per cent of the businesses on Vine Street in Cincinnati closed after the street was converted from two-way to one-way.

Like many of you, I could not understand how a two-way street could be safer for pedestrians than a one-way. It turns out, science has an explanation.

“The conventional wisdom has always assumed that one-way streets were safer and more comfortable for pedestrians to cross than two-way streets,” according to the study  “Superficially, it would seem that crossing the single direction of traffic on a one-way street is always preferable to crossing a two-way street.”

“As is often the case, the conventional wisdom is wrong. In fact, crossing a one-way street presents greater difficulties to the pedestrian than crossing a two-way street,” the study explains.

It all comes down to simple and not-so-simple math.

When a pedestrian crosses a two-way street intersection, there are only two possible sequences that they will encounter. And these two sequences are essentially the mirror image of each other, according to the study.

When a pedestrian crosses a one-way street intersection, there are 16 possible conflict sequences, depending upon which leg of the intersection they are crossing.

“Further, these sequences vary widely in their component parts. For example, some sequences have only a single conflict, while others have two or even three,” according to the study. 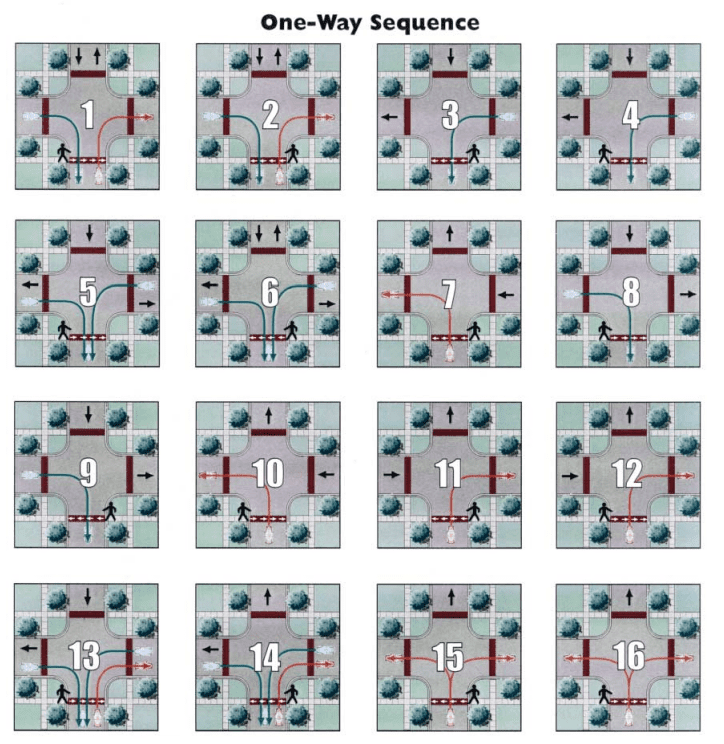 The two-way conversion of Main Street now appears long overdue considering the city’s vision for a prosperous downtown, more walkable neighbourhoods, and safer roads. Unfortunately, it may mean a few extra minutes in your car.