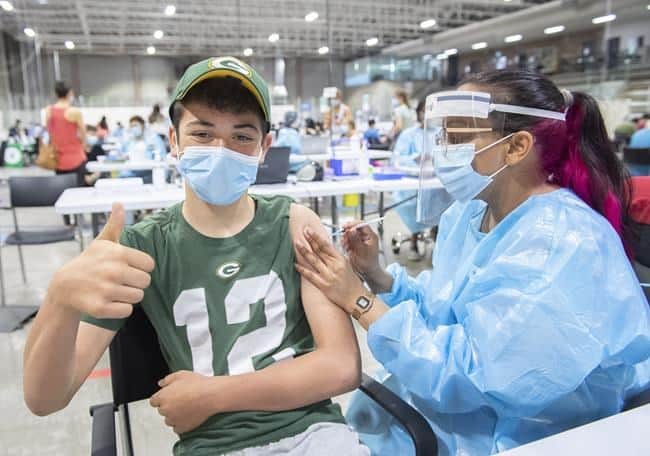 Ontario parents will likely be able to book COVID−19 vaccine appointments for their young children as early as next week, Health Minister Christine Elliott said Thursday, ahead of the expected approval of the shot for use in kids.

The federal government is set to announce Friday that Health Canada has given the green light to Pfizer−BioNTech’s vaccine for kids aged five to 11, and Elliott said the province’s vaccine booking portal will start accepting appointments in the following days.

“This is, of course, fantastic news. I know approval will be a huge relief to many parents, and represents a bright light at the end of the tunnel,” Elliott said at a news conference.

She said Ontario’s public health units will be ready to get COVID−19 shots in kids’ arms just as soon as new supply arrives.

The province needs the new product before it can start administering shots, because the dose for younger kids is significantly smaller than it is for adults.

“It could take from a few days to a week to receive doses, and rest assured we are working very closely with the federal government to ensure that we receive Ontario’s supply of the vaccine as soon as possible,” she said.

Canada is expecting an accelerated delivery of 2.9 million child−sized doses, enough for a first dose for every child in the five to 11 age group.

In a statement Thursday, Pfizer Canada said the company is prepared to deliver the pediatric doses to Canada soon after Health Canada gives its authorization.

Pfizer and its partner BioNTech submitted a request for approval of a child−sized doses of its mRNA vaccine for COVID−19 on Oct. 18. The U.S. approved the shot for kids the following week, and has so far vaccinated more than two million children.

Some public health units, such as Toronto, have already released plans for vaccinating kids. Hundreds of schools will offer vaccine clinics in the province’s most populous city, with efforts focused in 30 high−priority neighbourhoods.

Elliott said other public health units will release their plans in the coming days.

She said the province is also launching communication campaigns to make sure parents get accurate information about the shots.

“This includes partnering with SickKids Hospital, for example, to allow for confidential, convenient and accessible vaccine consult services for children, youth and their families,” she said.

But NDP Education Critic Marit Stiles said the province’s plans for youth vaccination have been too slow to materialize.

“In British Columbia, they have for months being registering five− to 11−year−olds on a centralized system,” she said after Elliott’s announcement, noting 70,000 kids in that province will already be signed up to get their shots when the approval comes through.

“In Ontario, we’re starting at zero.”