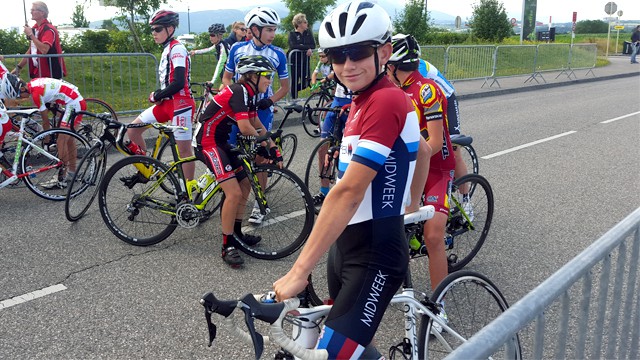 Can you imagine riding a bike for nearly 5,000 kilometres in a matter of five months?

That’s roughly how far Streetsville’s own Dylan Bibic has covered in cycling races and training sessions throughout majority of the 2016 season. Needless to say he’ll be rolling into the Ontario Summer Games as one of the top cyclists in the province.

Bibic opened the road cycling season with a first place finish in the Paris to Ancaster 40-kilometre race and hasn’t looked back. Now Bibic said that he has 80 medals to his name in the four years that he’s been a competitive cyclist.

Cycling wasn’t Bibic’s first sport. If you can believe it he said he grew up playing baseball until he decided he needed a change.

“It’s fast and fun, and it’s a good environment,” Bibic said about what thrills him to be a cyclist. All it took was a bike ride along the Credit River to ignite the flame for his new passion. And according to Bibic he treats his passion with immense professionalism.

“I train six times a week for an hour a day,” said the 13-year-old. “You have to train smart and not too hard but it’s good to always push yourself.”

He’s been training with Club Midweek Cycling where his Monday nights are spent practicing and Tuesday nights spent racing with adults. And in the offseason the homegrown athlete trains at the Milton Velodrome where he gets great exposure to professional cyclists and their training routines.

Bibic said he’s met Olympic track cyclists Hugo Barrette and Monique Sullivan, who are competing at the Rio Olympics, at the velodrome and that they’ve been gracious enough to give him advice that hits home.

“Monique told me that it’s good to be scared because it makes the competition mean something,” Bibic said when he recalled one of the many times he’s spoken with the Olympians.

Back in July Bibic didn’t seem to have any fear as the lone Canadian in a road race in Annesse, France.  He did have steep competition though.

“The amount of kids racing is incredible!” David Bibic said. “It’s like their hockey.”

After leaving their hotel at 6 a.m. to hop on a train for two hours to the course, Bibic stunned the primarily French, Italian and Swiss competition in the 20 kilometre race to take home second place.

“He almost beat their top guy,” David Bibic said. “It was a very eye opening experience.”

The OSG Road Cycling competition is separated into three different races: the Sprint Competition on Aug. 12 at 12:15 p.m., the Individual Time Trial on Aug. 13 at 10 a.m. and lastly the Road Race at 1 p.m.

Bibic is set to compete in the Individual Time Trial and the Road Race with the hopes of keeping his provincial win streak alive.