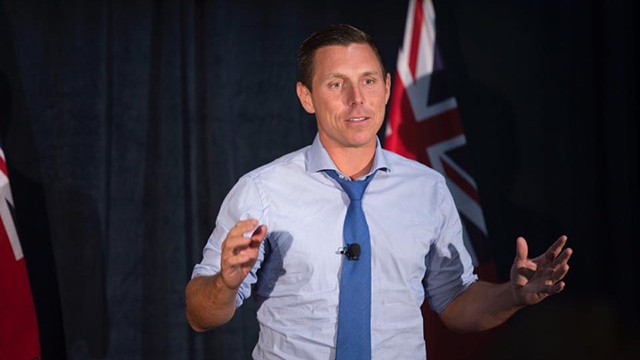 Ontario Progressive Conservative party leader Patrick Brown has announced that he is stepping down after being accused of sexual misconduct by two women.

“These allegations are false and have been difficult to hear,” Brown said in a statement issued on Jan. 25. “However, defeating Kathleen Wynne in 2018 is more important than one individual.”

Brown is vehemently denying the allegations, which were brought to light in a recent CTV News article.

Two unidentified women told CTV that Brown was sexually inappropriate towards them a number of years ago when they were very young. The first woman, who claimed the incident occurred over 10 years ago while she was still in high school, reportedly met Brown at a bar in Barrie.

The woman told CTV that Brown invited her and a mutual friend back to his home and provided them with alcohol, even though she was underage at the time. The woman says Brown offered her a tour of his home and eventually took her into a bedroom.

She says that he then exposed his penis and asked for oral sex, which she claims she provided briefly before stopping because she was uncomfortable.

Another woman told CTV that she first met Brown on an Air Canada flight in 2012 when she was 18. She later reached out to him while looking for a summer job and was subsequently hired to work in his constituency office.

After a party one night, the woman, who claims she was heavily intoxicated, says she and a male friend went to Brown’s house. After the other man left, Brown reportedly began kissing her on his bed, prompting her to freeze.

She stopped the encounter, but says she still characterizes Brown’s advances as sexual assault.

The woman chose to return to work for Brown the following summer and says he continued to make sexually inappropriate remarks towards her over the course of their working relationship.

At a hastily called press conference on Jan. 24, a teary Brown–who initially said he would not resign–denied the allegations.

“I reject these accusations in the strongest possible terms,” a visibly distressed Brown told reporters at Queen’s Park. “It’s not my values, it’s not how I was raised, it’s not who I am.”

“It’s never okay for anyone to feel they’ve been a victim of sexual harassment or feel threatened in any way. Let me make this clear: a safe and respectful society is what we expect and deserve. And no one appreciates that more than I do, I’ve got two younger sisters who are my best friends.”

A few hours later, Brown announced that he would be stepping down.

“…After consulting with caucus, friends and family I have decided to step down as Leader of the Ontario PC Party. I will remain on as a MPP while I definitively clear my name from these false allegations.”

Brown’s resignation came as no surprise. With the #MeToo movement continuing to build momentum, many voters are likely more sensitive to allegations of sexual misconduct.

This evening I learned of allegations against Patrick Brown. As a result, it is in the best interest of the PC Party that he step down immediately.

As he has chosen to follow a different route, I am resigning as the PC Party Press Secretary.

Other politicians also weighed in.

Federal NDP Leader Jagmeet Singh called the allegations “serious and deeply disturbing” and called on Brown to step down immediately.

Our thoughts are with the brave women who have had the courage to speak out about their experiences. We believe survivors & offer all survivors our unwavering support. The allegations against Patrick Brown are serious and deeply disturbing, and he should resign immediately.

Conservative MPP Lisa MacLeod also spoke out, issuing a statement on Twitter voicing her support for women who have been impacted by sexual misconduct.

The PC party is now tasked with having to replace its leader months before the election.

“I’m confident the president of our party and caucus will convene an expedited process to elect my successor who I look forward to working with,” Brown concluded in his statement.

The allegations against Brown have not been proven in court.