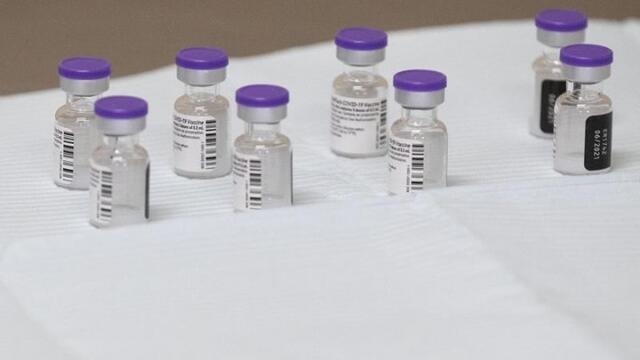 Ontario will not immediately lower eligibility for the Oxford-AstraZeneca shot to those aged 30 and older because of supply issues, the province said Friday after new guidelines were issued on the vaccine.

A spokeswoman for Health Minister Christine Elliott said with approximately 337,000 doses of the shot remaining and future shipments not expected until May, Ontario will keep offering the vaccine to those aged 40 and older for now.

“We look forward to receiving future shipments of AstraZeneca, which will allow us to begin vaccinating more Ontarians in younger age groups,” Alex Hilkene said in a statement.

The National Advisory Committee on Immunization recommended Friday that people 30 and older can get a shot of the Oxford-AstraZeneca vaccine if they do not want to wait for an alternative.

The committee had initially recommended the shots for people 55 and older out of an abundance of caution after reports of very rare blood clots. But some provinces, including Ontario, started administering the vaccine to those 40 and older given the current spread of the virus.

Health Canada has approved the shot for those 18 and older and has said the benefits outweigh the risks.

The updated NACI guidelines came as Ontario reported its first case of a rare blood clot in a person who received the Oxford-AstraZeneca vaccine.

It was the fourth case of the rare clotting condition in Canada out of more than 1.1 million AstraZeneca doses administered across the country.

The province’s top doctor said the man in his 60s had received his first dose of the vaccine. He had been treated and was recovering at home, Dr. David Williams said.

“While these serious reactions remain extremely rare, we have a robust process in place to monitor for any adverse events and have taken steps to ensure that these events are identified and treated as quickly as possible,” he said in a statement.

Earlier Friday, Ontario began offering COVID-19 vaccines to all pregnant individuals after the government noted they had a high risk of severe illness from the virus.

The health minister’s office said pregnant individuals are now considered among those with the highest risk health conditions under the province’s vaccination plan. They could book shots through the provincial vaccine call centre or local public health units, with no doctor’s note required.

Savana Merkley said she rushed to book an appointment upon hearing the news Friday, securing one over the phone for May 11 in Casselman, Ont., about 20 minutes away from her home in Ottawa.

The 23-year-old she was relieved to have the option to get vaccinated after hearing about the rising number of pregnant women with COVID-19 in intensive care units.

“As a first time mom, it definitely relieves anxiety around my baby being born in a pandemic, knowing we are both safe,” she said in a message.

The Society of Obstetricians and Gynaecologists of Canada applauded the Ontario government’s decision to prioritize pregnant individuals for vaccination.

The specialists’ group had called this month for all provinces to immediately prioritize pregnant people for vaccines. They noted in an April 15 statement that “pregnant women appear more likely to develop respiratory complications requiring intensive care than women who aren’t pregnant.”

“There is currently a daily wave of pregnant women coming into Ontario ICUs, many requiring ventilators,” the group’s statement said. “These women are getting extremely sick, very quickly.”

The group also noted that providing ventilator support is more challenging during pregnancy, with greater risks to the mother and child.

Ontario reported 4,505 new cases of COVID-19 and 34 more deaths linked to the virus on Friday. It also said there were 2,287 patients in hospital with COVID-19, with 818 people in intensive care.

Hospitals in Ontario have been stretched to capacity recently amid an onslaught of COVID-19.

Ontario previously said health-care workers from Newfoundland and Labrador were also expected to arrive to help within days.

Meanwhile, Toronto and Peel Region were able to begin ordering the temporary closure of some businesses to control workplace COVID-19 outbreaks as of Friday.

The top doctors in both regions said orders allowing for the closures were designed to protect tens of thousands of essential workers from the virus.

Both regions said the orders would close businesses with recent outbreaks of five or more linked cases in the past two weeks. Any shutdowns will last 10 days and workers will have to self-isolate during that time.