Ontario Hydro Bills Allegedly Will Increase Over Next Decade

So, remember how the Ontario government, after ignoring the issue of rising hydro rates and skyrocketing electricity bills for years, finally acquiesced to a 25 per cent hydro rate cut in their recent budget? Many in the province saw that as political opportunism in response to the Ontario Liberals losing a couple of by-elections in the last few years, but at least the budget was balanced and we were getting a break on our electricity bills.

According to this leaked document recently released by the CBC, while hydro bills in Ontario are projected to stay below last year’s record high until 2024, they will steadily climb back up and surpass $200 a month on average by 2028. The document shows projections for the average monthly hydro bill (tax included) that drop from $158 last year to $123 this year. The bigger jumps in prices start in 2022, when the government’s promise to keep rate increases below inflation expires. Bills are forecast to rise from $133 per month in 2021 to $215 per month in 2028. 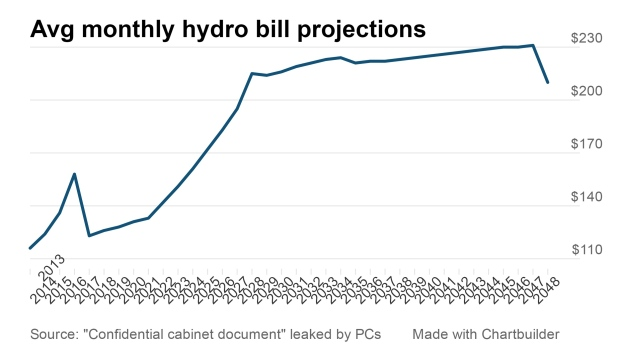 If reading graphs makes your eyes hurt and you can't decipher these numbers, here's a graph provided by CBC based off the document leaked to the media by the Ontario Progressive Conservative opposition at Queen's Park.

In a news conference after this information was leaked, Energy Minister Glenn Thibeault questioned the accuracy of the numbers but stopped short of denying them. So…he’s not saying it’s complete BS…maybe that the increases are not as big as being reported? UPDATE: Thibeault was on Newstalk 1010 (CFRB) this morning with host John Moore to clarify that the leaked document from yesterday contained outdated numbers.

As for how this affects the average ratepayer, according to CP24 the time-of-use rates are being lowered by removing from bills a portion of the global adjustment, a charge consumers pay for above-market rates to power producers.

For the next 10 years, a new entity overseen by Ontario Power Generation (OPG) will pay that difference and take on debt to do so. Then, the cost of paying back that debt, which the government says will be up to $28 billion, will go back onto ratepayers’ bills for the next 20 years as a “Clean Energy Adjustment.”

I’m sure the government will have an official response, but nothing like a little October surprise in the middle of May, huh?

Popular Toronto Thai restaurant opening a location in Mississauga
Mississauga’s newest Thai restaurant, Mo Thai, is coming to Cooksville before the end of May.
END_OF_DOCUMENT_TOKEN_TO_BE_REPLACED