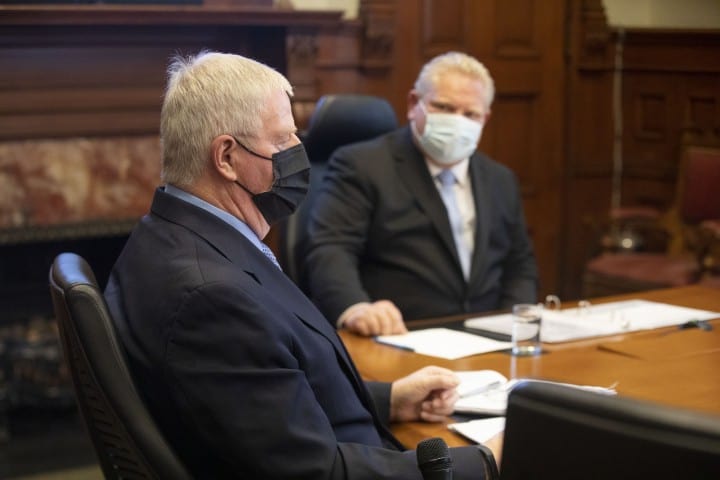 On April 6, Premier Doug Ford announced that the province is moving into Phase Two of its COVID-19 vaccine distribution plan, with a focus on reaching individuals in “hot spot” communities (such as Peel, Toronto, Halton and Hamilton) where COVID-19 has disproportionately impacted certain neighbourhoods.

At a press conference, Ford also insinuated that more restrictions could be coming in addition to the current “emergency brake” measures that went into effect over the long weekend. Ford cited crowds at Toronto shopping malls–which his government has allowed to remain open–as a reason for concern.

Ford also said that most new cases are being found in Peel (Brampton, Mississauga and Caledon), Toronto and York, but refused to comment on what further restrictions are under consideration and whether they’ll be province-wide or hotspot-specific.

At the press conference, Ford did say that hotspots will be prioritized for vaccination distribution.

According to the province, over 20 per cent of community-based deaths in Ontario have occurred in just 10 per cent of areas referred to as hot spots, where COVID-19 rates are highest.

The following public health units will receive additional doses (up to 920,000):

The province also announced that Phase 2 will prioritize individuals with the highest-risk health conditions in April 2021.

“Thanks to the tireless efforts of our frontline health care workers, we are getting needles in arms as quickly as possible and have now administered over 2.6 million vaccines,” Ford said in a statement.

“As soon as vaccines arrive our focus is turning to the communities hit hardest by COVID-19 and those with the highest-risk health conditions. With the extraordinary work of Team Ontario we aim to deliver over 9 million vaccinations across Ontario by the end of June.”

Phase Two is focused on age and at-risk populations, with special emphasis on people in hard-hit cities such as Mississauga, Brampton, Toronto, Hamilton and other GTA municipalities.

The province said the Ministry of Health is working with public health units to ensure timely access to vaccines among the identified communities through all available vaccine delivery channels, including pharmacies, mass vaccination clinics, and mobile teams. The province also said it’s supporting regions to vaccinate individuals aged 50 and over by postal code in COVID-19 hot spots.

Starting as early as April 6, 2021, individuals with the following highest-risk health conditions will be eligible for COVID-19 vaccination in Ontario:

The province said it’s expecting to reach the majority of this group through hospital clinics by the end of April 2021. Patients in the highest-risk clinical groups will be contacted by their health care providers to set up an appointment for a vaccination.

Other high and higher-risk populations who will be vaccinated between April and July include:

The province also said that through Phase 2, it will work to vaccinate people who live in congregate settings (such as shelters, correctional facilities and other residential facilities) and people who cannot work from home (such as warehouse and factory workers and teachers).

“As we begin Phase Two of our immunization rollout, we will first focus our efforts to protect those with the highest-risk health conditions and certain essential caregivers,” said Solicitor General Sylvia Jones in a statement.

“Over the past year, Ontarians have made great sacrifices, and we can only stop the spread of COVID-19 through our continued collective actions. Please stay home unless absolutely necessary and follow public health measures.”

As of April 5, over 2,621,000 vaccine doses have been administered across the province, with over 85 per cent of Ontario residents aged 80 and over having received at least one dose. More than two-thirds of residents aged 75 to 79 have now received their first shot. Over 322,000 Ontarians are fully immunized, including 92 per cent of long-term care residents.

Individuals aged 70 and over continue to be eligible for vaccination during Phase Two.

Those eligible based on their age can schedule a vaccination appointment by visiting Ontario.ca/bookvaccine, or by calling the Provincial Vaccine Booking Line number at 1-833-943-3900.

The province says that over nine million Ontarians will be offered their first vaccination between April and the end of June 2021.