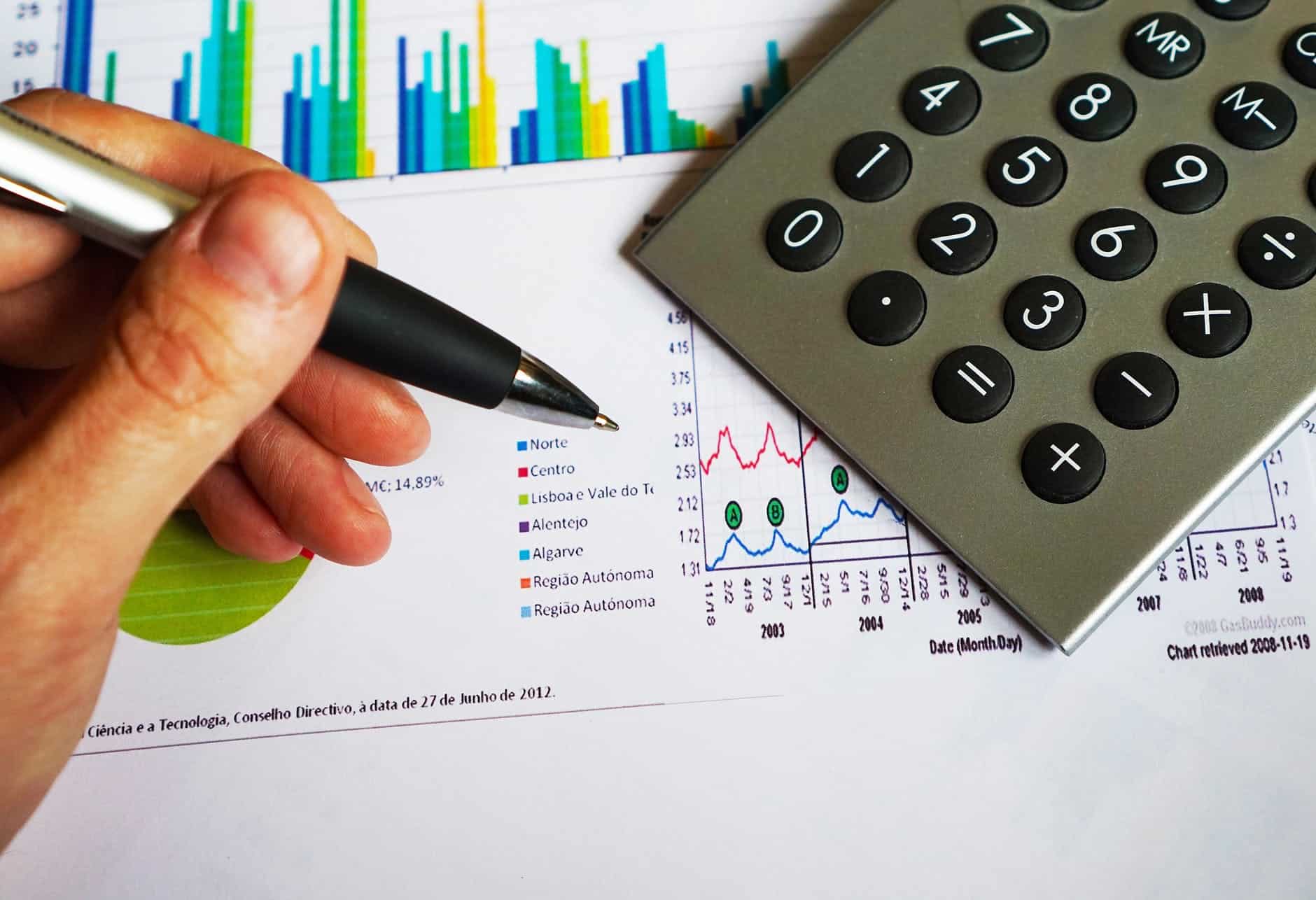 It’s a common mantra coming from the current Ontario government that because of the ‘financial mess left behind by the previous Liberal government,’ the province needs to get serious when it comes to fixing the finances.

Back in September, the province discovered that things were in worse shape than initially reported: Ontario actually has a $15 billion deficit instead of a more ‘modest $3.7 billion’. Finance Minister Vic Fedeli is scheduled to deliver a fall economic update soon and Ontario Premier Doug Ford has a number of promises he intends to keep besides balancing the books, with a focus on getting the economy moving again and creating jobs.

But a new report from TD Bank says that if Ford keeps his promises, the premier could end up increasing the size of the deficit instead of reducing it. Specifically, the report estimates that the deficit would go from $15 billion to $18 billion next year if the Ontario PC government keeps their core campaign pledges.

The first finding from TD is that, if the “status quo” is maintained, by which they mean program spending is kept constant in real per capita terms, with modest economic growth of 3.4 per cent to 4.3 per cent and no significant increase in infrastructure spending, the deficit would still rise to $17 billion by 2022-23.

However, if you factor in the cost of pledged campaign commitments, the result is larger deficits each year, particularly impactful are pledged cuts to corporate and personal income taxes, which cost $3.6 billion annually by the third year of the government’s mandate. 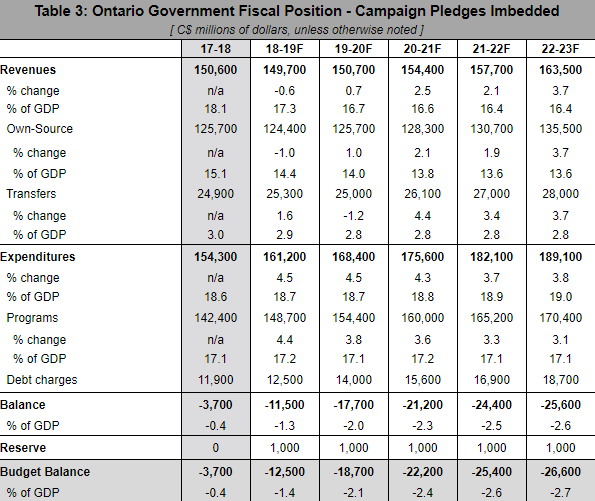 According to TD, while they assume that scrapping the Basic Income Pilot and the planned university campuses in Brampton, Markham and Milton would would result in $2 billion of less spending, planned tax cuts that the Ford government promised could add to the deficit, such as the pledge to cut gas taxes by 10 cents per litre.

“The government’s decision to cancel the cap and trade program represents an increase in the deficit. Based on analysis done by the Financial Accountability Office, the lost revenue from abandoned auctions outweighs savings from cancelled spending related to the program. Also, the federal government is almost certain to introduce some tax relief measures in its upcoming update, notably full expensing. A matching at the provincial level would put upward pressure on the province’s deficit, though it’s’ too early to tell by how much,” the report continued.

However, TD’s report does outline a scenario on what would happen if spending was constrained. 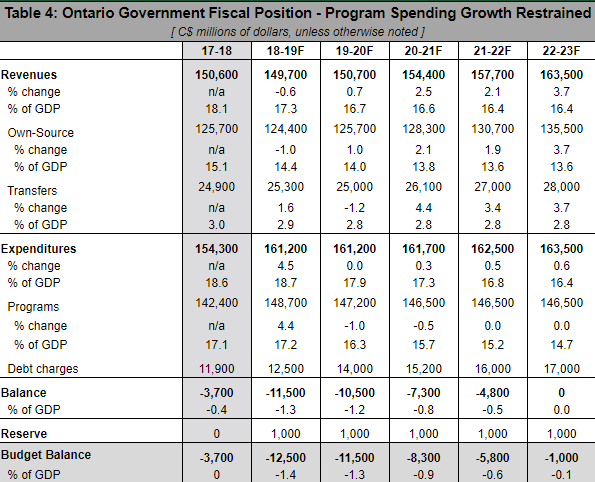 “One would have to go all the way back to the mid-90s to find restraint of a similar magnitude. And, while the line-by-line audit had some good ideas on how to generate savings, reducing spending so drastically will be no easy feat. Program spending per capita is already amongst the lowest in Canada, suggesting little room to cut.”

The reports conclusions are rather grim: “Should the economy take a turn for the worse, the government’s job becomes exponentially harder. All told, the path to balance will be fraught with hard decisions.”

Overall, the ideal scenario to get the budget back into balance will take several years if spending was kept flat; in other words, if the Ford government literally announces no new spending during this first term of government. However, tax cuts cost money as well, and that is a bread and butter Conservative Party issue.

Not to mention that Ford is adamant in joining this lawsuit with other provinces against the federal government’s carbon pricing model, an endeavour that could cost the province up to $30 million, potentially adding to the deficit.

The thought of the government spending almost nothing in their term may appeal to some of the most hardcore proponents when it comes to fiscal restraint, but like all governments (no matter which party they come from) the PCs would be pressured to keep their campaign commitments to their voters…and that requires spending money somewhere.

We will see what updates the Finance Minister delivers in his economic update.