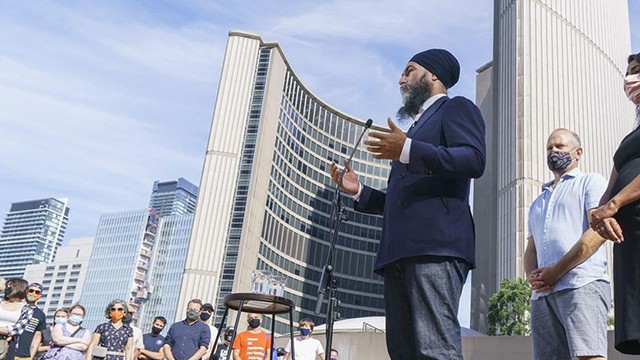 TORONTO — Pandemic response and recovery plans will likely be how parties aim to secure votes in hard-hit Ontario during this federal election, experts say, but just which pledges will hold the most appeal remains to be seen.

Ontario has experienced frequent lockdowns, school closures, widespread workplace outbreaks and a health system pushed to the brink over the last year and a half. The pandemic experience for many residents has, however, varied depending on where they live and what they do.

Some have worked risky front-line jobs or lost employment during shutdowns, while others have continued earning uninterrupted income from the safety of their homes. Parents with young kids have had to juggle work and child-care duties as schools moved online at several points, while residents in long-term care have denounced heavy restrictions that they say left them feeling imprisoned.

That range of experiences, experts say, makes it challenging for politicians to come up with promises that resonate with all groups — but appealing to residents in Ontario, which has the largest number of legislative seats, will be key to winning the race.

“This is going be where a majority is won or lost,” said Peter Loewen, a professor at the University of Toronto’s Munk School of Global Affairs and Public Policy.

All three major parties are competitive in the province, which means their pledges in Ontario will likely offer a glimpse of how they plan to present themselves across the country, Loewen said.

The Liberals will likely stay focused on urban areas like Toronto, where they’ve seen strong results, said Andrew McDougall, a political science professor at the University of Toronto.

The Conservatives, who historically perform better in the so-called “905” region surrounding Toronto, as well as rural areas, will need a breakthrough to gain major ground in the “must-win” province, he said.

Overall, McDougall predicted, the parties will likely concentrate on COVID-19 and its impact.

“I think most of the conversation will be focused on emerging from the pandemic and what that’s going to look like,” he said.

Outside a shopping centre in an east Toronto riding, Vic Garbutt said he wasn’t looking forward to the “hassle” of a pandemic election but would vote Liberal again because he’s appreciated how the party has navigated COVID-19.

“They’ve done well during the pandemic, kept us pretty safe and supported us,” he said.

Khaterine Rudas, another Toronto voter, said housing affordability — especially solutions to tackle homelessness — and unemployment will be key issues for her. Rudas said she voted Liberal in the last election but she’s open to changing her vote this time.

“I’m leaning maybe towards the NDP, but we’ll see what type of points they have,” she said.

Key issues relevant to the vast majority of Ontarians are tricky right now, given the range of experiences and priorities residents have during the pandemic, said McMaster University political science professor Peter Graefe.

“There’s space for a stronger class-themed election than we’ve seen in parts of the province … Presumably we’ll see Jagmeet Singh and the NDP leading that,” he said.

The issue of affordable housing is an example of how it’s challenging to target all Ontarians with a single policy, he said, noting that some have struggled to access the buyers’ market while others live with unaffordable rents or fear of eviction.

“There’s a lot of unhappiness in terms of the housing market, but people are facing different kinds of unhappinesses, so how do you find the policy or set of policies that pull it all together?” Graefe said.

The NDP will likely focus on specific ridings in Toronto or in Ottawa Centre, where former Liberal cabinet minister Catherine McKenna is not running again, said Graefe.

For the Liberals, it will likely be a “defensive game” with some attempts to pick up more seats in growing or urban areas such as Hamilton.

Ontario will be most crucial for Conservative Leader Erin O’Toole, Graefe said, noting that the politician from southern Ontario was likely chosen for his ability to connect with voters in the region better than his 2019 predecessor, Andrew Scheer.

However, Graefe contended that O’Toole has not clearly defined who he is for voters in the region, or explained why they should choose his party over Trudeau’s incumbent Liberals.

“The pandemic was a moment where a lot of Ontarians got to reflect a bit on work in their lives and the time they spend commuting and what sources of security or insecurity were in their lives,” he said.

“They’re probably looking for a bit more of a vision from a political leader about how they’re going to address those things.”