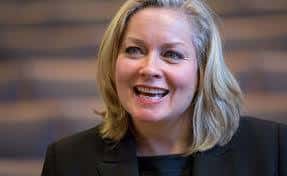 TORONTO — Another Ontario COVID-19 official has resigned over foreign travel.

Premier Doug Ford’s office says he has accepted the resignation of Linda Hasenfratz as a member of Ontario’s COVID-19 Vaccination Distribution Task Force.

Ford’s office says she stepped down after it was brought to his attention that she travelled outside the country in December.

No other details were released other than that she has apologized.

Earlier this month, Dr. Tom Stewart resigned from a group of experts that help guide the provincial government’s response to COVID-19 after travelling to the Dominican Republic over the holidays.

Stewart later stepped down as chief executive officer of the Niagara Health System and the St. Joseph’s Health System.

“Thanks to the efforts of all Ontarians, we are starting to see early signs of progress in bending the curve,” reads the statement.

“Now is not the time to let up. We continue to urge everyone to stay home.”

Last week, Dr. Paul Woods, the CEO of a hospital network in London, Ont., was ousted from his post after concerns were raised about his international travel during the pandemic.

Woods travelled to the U.S. five times since March, including during the December holidays, the London Health Sciences Centre said.

Last month, Rod Phillips, Ontario’s former finance minister, resigned from his post after it was revealed he travelled to St. Barts for a December vacation.