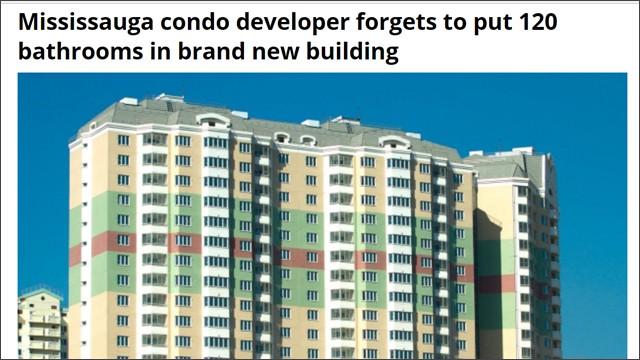 CBC Radio’s This is That program recently called attention to a shocking — and hilarious — story about condo owners who were horrified to discover that their brand new units were missing one crucial element: bathrooms.

Sadly, the incredible story is false.

In case you didn’t hear, the story was basically about residents discovering, shortly after taking possession of their suites in a 35-storey Mississauga condo, that their new homes were devoid of washrooms. This is That host Peter Oldring interviewed fictitious developer Jordan Petrescu about the matter, and the clueless builder said, “there are no bathrooms in the units, but there were also no bathrooms on the plans or in our show suites, so technically, our customers bought these units knowing they were bathroomless.”

Petrescu went onto to defend his mistake with a fabulous analogy that — should you listen to the recording — may legitimately make you laugh out loud.

“Let me give you an analogy. I go into a store and I purchase a shirt. I come home and am excited to open up my shopping bag and I try to put the shirt on my leg as pants. I am shocked they’re not pants, yet I went into that store and I purchased a shirt. I have no right to come back to the store and say these pants don’t work and that’s exactly what’s happening here with this condo.”

To fix the problem, Petrescu and his team — at his expense, that saint — put 200 gorgeous port-a-potties (or, in his words, “portable washrooms”) in the building’s parking area. He also recommended that people use the washroom at a nearby Starbucks.

When questioned about his incompetence, Petrescu said that he’s not incredibly stupid — he just put up a huge condo as quickly as possible because that’s what the people wanted.

They got some of us good.

As far as we know, all Mississauga condos come with bathrooms.