One Dead After Rollover Collision on 407 in Brampton 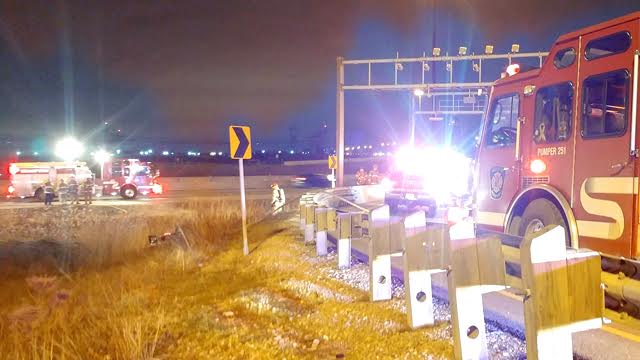 One person is dead after a fatal rollover collision on the 407 in Brampton.

One person is dead after a fatal rollover collision on the 407 in Brampton.

According to OPP Sgt. Kerry Schmidt, the fatal rollover occurred on the westbound 407, right off the northbound Dixie Road ramp.

According to police, officers were called to the scene at approximately 6:30 p.m. The collision only involved one vehicle and appears to have occurred when the driver lost control while entering the highway.

Sgt. Schmidt said the vehicle hit and drove against the guardrail after the driver lost control. The car, which appears to have rolled over, traveled for some distance in a grassy area near the highway before catching fire and becoming engulfed in flames.

Emergency crews were unable to extricate the driver. He or she was subsequently pronounced dead at the scene (there is no information on gender at this time).

A collision reconstruction team is currently on scene investigating the incident.

The northbound ramp to the 407 is closed, as are the right lanes of the highway in the Dixie Road area.

There are no details on the deceased available at this time.

Anyone with any information regarding the collision is asked to call the 407 OPP detachment at 905-841-5777.

The affected ramp and lanes will remain closed until approximately 11:00 p.m.