On Bill 23, Hamilton says ‘no thank you’ to Ford housing bill 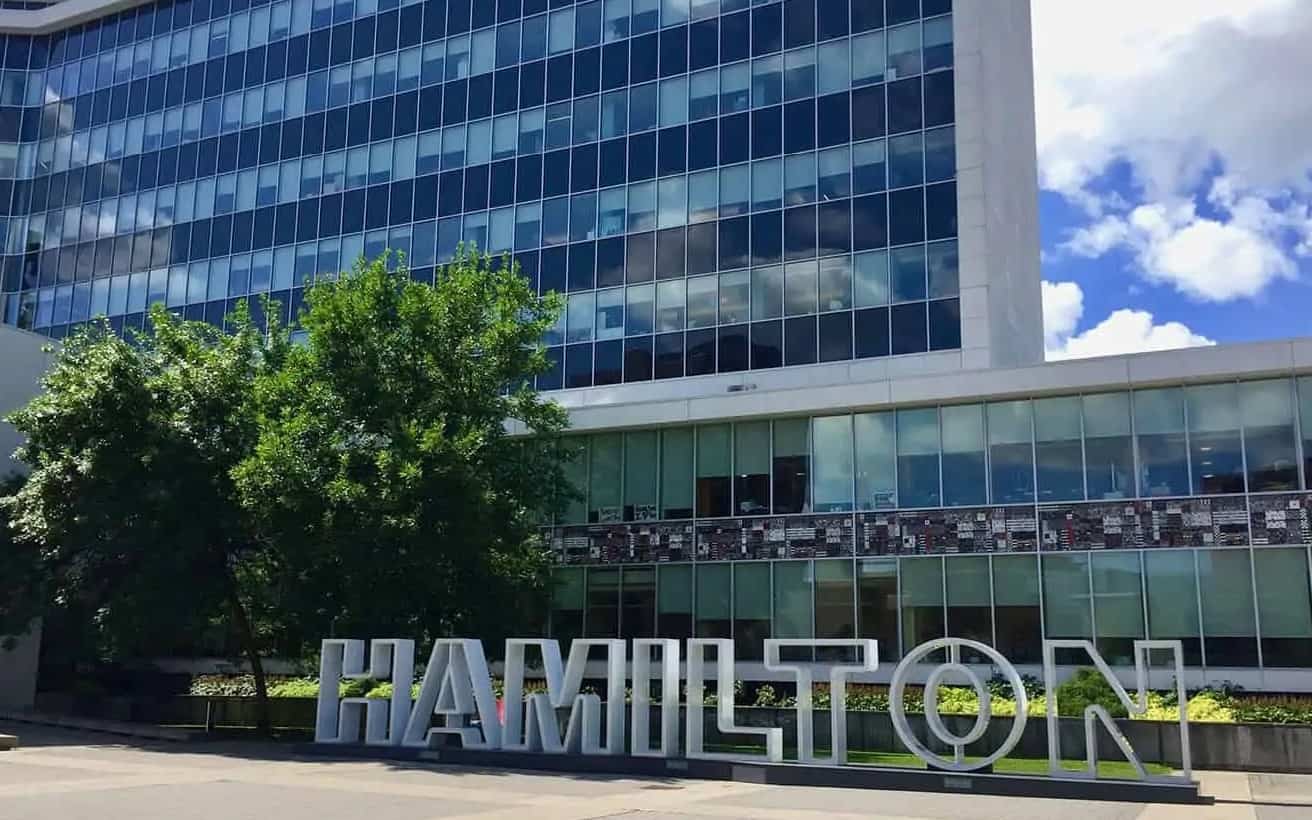 Before even looking at how property taxes will likely go up, the City of Hamilton has told Municipal Affairs and Housing Minister Steve Clark it “is not supportive” of Bill 23.

A deep gallery of city managers were at a planning committee meeting today (Nov. 29) to discuss local ramifications of the Premier Doug Ford-led PC Party of Ontario government’s More Homes Built Faster Act, 2022, which was passed on Monday. (Consultation continues until Dec. 9.)

A letter sent to Clark, signed by Planning and Economic Development general manager Jason Thorne, says the PC Party’s bill “show(s) little regard for the other aspects that make Hamilton a unique and desirable place to live and the elements of making communities liveable and complete.”

Bill 23 has been widely criticized by climate justice activists, renter advocates, the Association of Municipalities of Ontario and several municipal governments. The potential removal of development charges — which pay for public amenities around new housing — could force heavy property tax increases. It also weakens environmental protections since Greenbelt lands — some of which was purchased recently by wealthy PC Party donors, at high interest — will be opened to development, and local conservation authorities will not have a say. Cities also have to have a plan ready by the end of 2023 to develop the opened Greenbelt lands, even if they don’t need them for housing — which Hamilton says it does not.

The meeting today expanded on city planners’ concerns with Bill 23. The financial hit on ratepayers — figures on the order of an 80-per-cent property tax increase have been bandied in some similar-sized cities — will be presented at an upcoming AFA (audit, finance and administration) committee meeting.

Chief planner Steve Robichaud noted that Hamilton was already moving on increasing housing stock without needing to pave over farmland. He also noted that smaller developers, who often consult with the city as they build, could find the new processes baffling.

“It is easier if municipalities respond to our own circumstances. There are going to be unintended consequences because applicants are going to find the process more difficult.”

Last year, the city found a way to preserve a firm urban boundary and find space for the 110,000 new households the province says it will add by 2051. Some 1,310 hectares were protected.

A string of zoning reforms followed. But the province rejected the firm urban boundary on Nov. 4, before the PCs passed Bill 23.

“The last time we revised our official plan, there were easily 80,000 households within the boundary,” Robichaud said. “We passed a tranche of zoning reforms to look for opportunities and space to get to 110,000. That involved looking through family-friendly housing guidelines as well since not everyone can live in a one-bedroom apartment.

“The city has been progressive and proactive already,” Robichaud added. “To the province, we say thank you, but no thank you.”

As numerous residents and outside planning experts previously emphasized, the city is not running short on land.

“The city does not require any additional lands in our planning horizon,” Heather Travis, the city’s manager of the staging of development and legislative approvals, told councillors. “It’s not clear why removing greenbelt lands to achieve short-term housing goals is being proposed.”

‘Hard to connect the dots’

The bill sets a goal of building 1.5 million homes over the next decade to address a universally accepted housing affordability crisis. However, greenspace and farmland that is opened to development require municipal services, such as sewer lines and sidewalks. Thorne said that while the province “sets the rules of the games” with planning, he could not see how the province was getting from Point A to Point B.

“It’s hard to connect the dots on how exactly that is intended to ease short-term housing concerns,” he said.

The letter from the city to the province elaborates on those concerns.

“The proposed legislative changes are contrary to balanced decision making, protection of the natural environment and parkland, building complete communities and public spaces, good quality architecture and design, and affordable or attainable housing. The legislative changes purport to be about building homes but show little regard for the other aspects that make Hamilton a unique and desirable place to live and the elements of making communities liveable and complete.

“The City is facing a housing crisis and a climate crisis. The City has a responsibility to review existing practices and policies and adapt and make changes in the public interest. However, the proposal as presented by the Province fails to address the goals of increasing housing supply, housing affordability, and improved process and will result in the loss of environmental protections, heritage conservation, and urban design along with severe financial implications for the City, including the transfer of responsibilities from the Conservation Authorities to the City with no consideration of the financial and resourcing impacts this will have.

It adds, “The City supports the Province’s goal of building 1.5 million homes over the next ten years and tackling the affordability crisis affecting every Ontarian. However, the City has concerns that the changes proposed through Bill 23 will not effectively support these goals.” 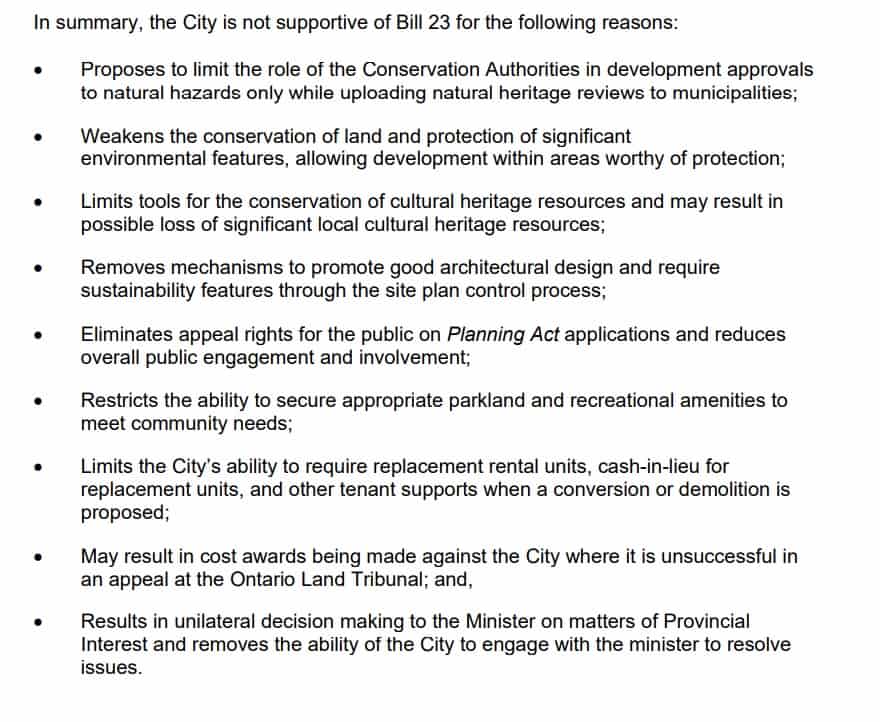 Several demonstrations against Bill 23 have been held in Hamilton over the past few weeks. Another one is scheduled to be in front of city hall at 1 p.m. on Sunday (Dec. 4).

Karl Andrus, representing the Hamilton Community Benefits Network, noted that renter protections that the city has worked to include in its downtown secondary plan would be avoided. Residents who rent over several years have

“This is going to affect renters across the board, but you will see youth and seniors affected disproportionately,” Andrus said.

Renter groups, such as ACORN Hamilton, have called for protections that keep a person from being left out in the cold if a property owner converts or renovates rental housing (a practice called “renovictions” or “demovictions”). Megan Pham, a senior project manager with the city’s Healthy and Sustainable Communities division, told Ward 2 Coun. Cameron Kroetsch it is in peril.

“This legislation may limit what we can do,” Pham said.

Traditionally, developers must set aside one hectare of land for parks per 300 units. The ratio will be diluted to one hectare per 600 units. Cynthia Graham, the acting director of Environmental Services, said it will be more difficult for Hamilton to create more park space, which apartment dwellers — particularly those with children — count on for fresher air and recreation.

“Under Bill 23, it is more difficult to meet the requirements we look for in parkland,” Graham said, also in a response to a question from Krotetch. “This legislation also reduces the number of funds and size of parcels (of land) we will get from developments. This is a significant change to the city’s ability to acquire lands, particularly in areas that need it.”

Meghan Stewart, a supervisor with the Landscape Architectural Services division, confirmed the city already has “a deficit in parkland.”

The report from staff, including the letter signed by Thorne, was received by a unanimous 12-0 vote. (Horwath was in attendance as a non-voting member.)

“I know this makes for a long day, but these changes are substantive,” Ward 1 Coun. Maureen Wilson said, referring to Bill 23 and the province nixing the urban boundary provision.”

The other three parties at Queen’s Park have been critical of Bill 23, which all PCPO members supported, including Hamilton-area MPPs Neil Lumsden (Hamilton East—Stoney Creek) and Donna Skelly (Flamborough—Glanbrook). Neither MPP has responded to messages from inthehammmer about whether they plan to speak to demonstrators in Hamilton.

Media reports have detailed how developers who are PC Party donors own land that is now developable. In one case, The Globe & Mail reported that a PC Party donor borrowed $100 million from a major bank, at 21 per cent interest, to buy some of the Greenbelt lands.

Green Party of Ontario Leader Mike Schreiner has also filed a complaint with the provincial integrity commissioner regarding how the series of purchases of lands that were under environmental protections.