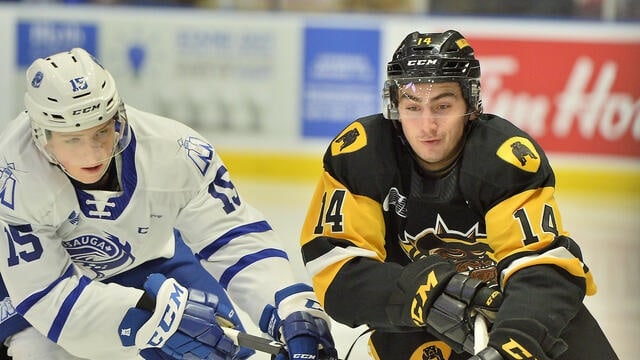 The Ontario Hockey League is reportedly set to make COVID-19 vaccination mandatory for anyone who is involved in the league in some capacity.

A report published by The Hockey Writers on Monday, citing multiple sources, says players, coaches, team staff, on-ice and off-ice officials, and host families would be required to be fully vaccinated at least two weeks before training camps are opened in early September. Newcomers, such as first-year players, would also have to provide proof two weeks ahead of time before they begin their involvement with the OHL.

The 20-team OHL has not played since March 2020 due to the COVID-19 pandemic. It was the only one of the three leagues that comprise the Canadian Hockey League that did not play at all this past season.

The Quebec and Western leagues threw together some semblance of a season, but there were numerous positive COVID-19 tests. The Western league ended up playing only a regionalized regular season.

Players in the OHL/CHL, which is a professional-environment development league for hockey players aged 16 to 20, spend an abundance of time in closed-space environments. That includes dressing rooms that often tend to be smaller than NHL facilities, team bus rides to road trips, and billet homes that they share with a host family, who receive a stipend from the teams to cover housing.

New: No vaccine, no play? The #OHL is set to enforce a rule mandating Covid-19 vaccines to everyone involved in the league. Not everyone is happy with this. We discuss the instant impact this rule will have. For some, career decisions could be involved. https://t.co/7As7H5w8Q9

The big-four North American leagues (NBA, NFL, NHL and Major League Baseball), Canadian Football League and Major League Soccer have not made vaccination mandatory for players and associated team personnel. Each of those pro leagues have a players’ association that has a right to collectively bargain the issue.

The OHL does not have a players’ association, which gives it the latitude to impose a blanket policy about on-ice and off-ice rules.

The NFL has imposed strict restrictions on movement within team facilities for unvaccinated individuals who cannot prove they have a medical and/or religious exemption. The NHL and MLB considers a team to be fully vaccinated when 85 per cent of Tier 1 personnel have completed a vaccine series.

The CFL is requiring players who go to a new team to complete a seven-day quarantine before they can join team activities.

Meantime, the OHL is planning to play a 68-game regular season, but with a later-than-normal Oct. 7 start date. Interconference play will also be deemphasized, in order to reduce travel.

The Oshawa Generals (Oct. 8 home opener), Hamilton Bulldogs (Oct. 9) and Niagara IceDogs (also Oct. 9) each have their home openers during the Thanksgiving long weekend. The Mississauga Steelheads’ home opener is on Oct. 22.

The league has not announced whether in-person attendance will be permitted. However, the Canadian Elite Basketball League has been allowed to have up to 1,000 fans at its games in Ontario, all of which are played in arenas that are used by an OHL team.