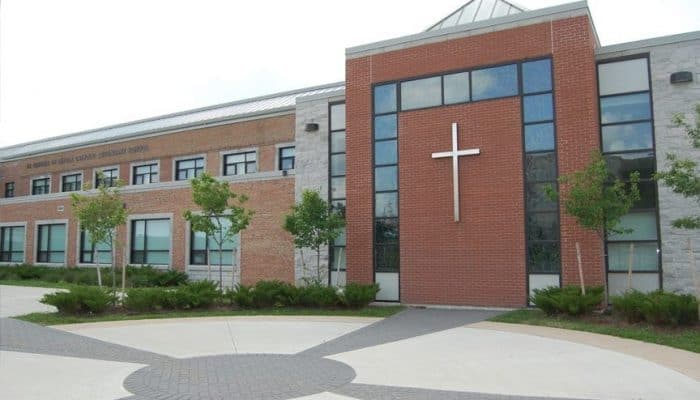 The Halton Catholic District School Board (HCDSB) is considering a list of six new facility renewal projects and among those proposed is a replacement of the artificial turf at St. Ignatius of Loyola Catholic Secondary School. HCDSB IMAGE

Oakville’s St. Ignatius of Loyola Catholic Secondary School and St. Teresa of Calcutta Catholic Elementary School are on tap for some major upgrades.

The Halton Catholic District School Board (HCDSB) is considering a list of six new facility renewal projects and among those proposed is a replacement of the artificial turf at Loyola and replacing the roof at St. Teresa of Calcutta.

The artificial turf field at Loyola, which would cost an estimated $700,000 to replace, was installed in 2010 and has reached its expected 10-year lifespan.

The project includes removing the original turf and repairing the base before a new turf system is installed.

A new roof at St. Teresa of Calcutta would run approximately $650,000. The current roof was installed during the school’s construction in 1999 and has surpassed its useful lifespan of 20 years.

It is expected that without replacing the roof, maintenance costs will increase for both the roofing system and the resulting damage to the interior building spaces due to roof leakage.

The aim is to have both projects completed by the summer of 2022.

The project is part of the HCDSB’s Long Term Capital Plan, which presents a comprehensive school accommodation plan, along with school renewal requirements to improve school facility conditions throughout the board over a five-year planning window (2021-2025).

The estimated cost for work at Loyola, St. Teresa of Calcutta and the other four proposed school projects combined is $6.75M.

All the costs for the proposed 2022 facility renewal projects will be funded through the Board’s available capital funding allocations and reserves.

The HCDSB currently has $14.5 million in available capital funding sources.

The resolutions will be presented for HCDSB Trustee consideration and approval at the November 16 regular meeting.