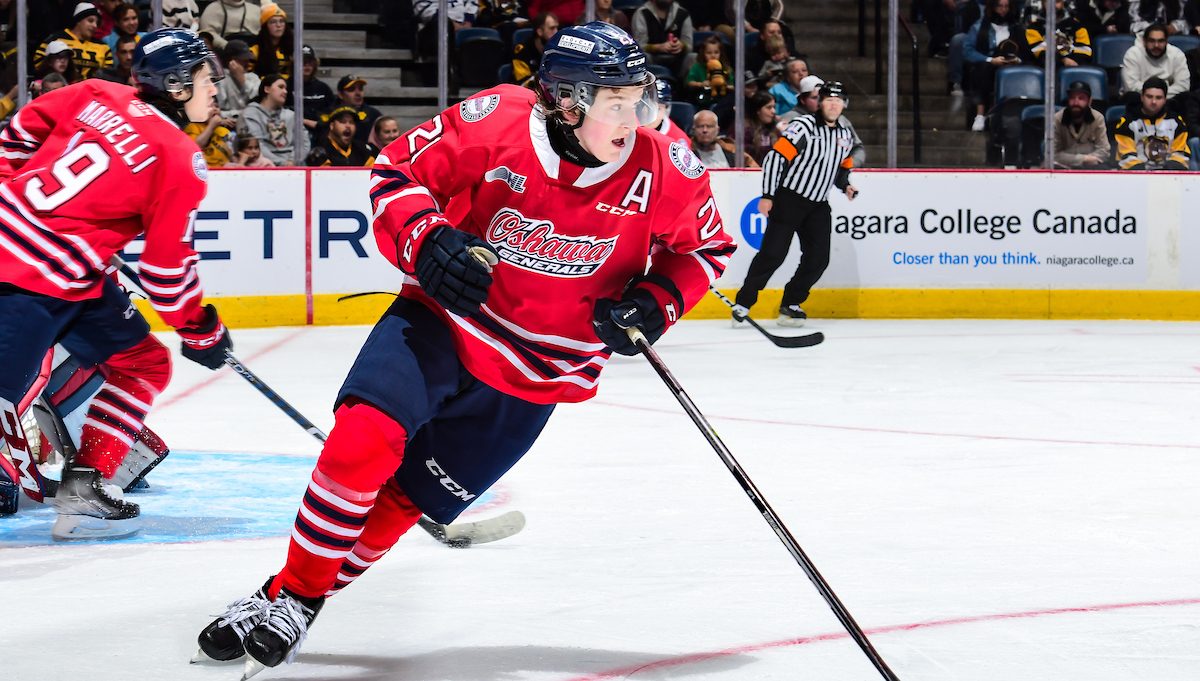 Oshawa Generals forward and Oakville native Calum Ritchie is one of 40 players chosen to take part in the 2023 CHL/NHL Top Prospects Game on Jan. 25 in Vancouver, B.C. OHL IMAGES

Oakville natives Calum Ritchie, of the Oshawa Generals, and Nick Lardis, of the Peterborough Petes, have both been named to the 2023 CHL/NHL Top Prospects Game on Jan. 25 in Vancouver, B.C.

The forwards are two of 15 OHL players selected for the annual top prospects game which showcases the top 40 eligible players for the 2023 NHL Draft.

Players are also chosen from the Western Hockey League and Quebec Major Junior Hockey League, identified via a survey conducted with the 32 NHL teams.

Ritchie, who was taken second overall by Oshawa in the 2021 OHL Priority Selection, has 10 goals and 25 assists in 27 games this season.

Ritchie led Team Canada Black to a gold medal at the 2021 Capital City Challenge. In the tournament, which was a replacement for the COVID-19 cancelled World U17 Hockey Challenge, he had five goals and six assists.

The game will be played at the Langley Events Centre in Vancouver.

NHL Central Scouting has listed Ritchie as an ‘A’ level prospect and is set to be a first-round selection at the 2023 NHL draft.

Lardis has 12 goals through 30 games with the Petes this season. As a rookie last year, he posted 18 goals and 19 assists in 63 games.

The five-foot-10, 154-pound winger was originally taken by Peterborough sixth overall in the 2021 OHL draft.

Lardis was given a ‘B’ level rating on the NHL Central Scouting 2022-23 Preliminary Players to Watch List, indicating he’s a potential second- or third-round selection.

The Top Prospects game will be played at the Langley Events Centre in Vancouver.

The 2023 NHL Draft is scheduled to take place June 28-29 at Bridgestone Arena in Nashville.