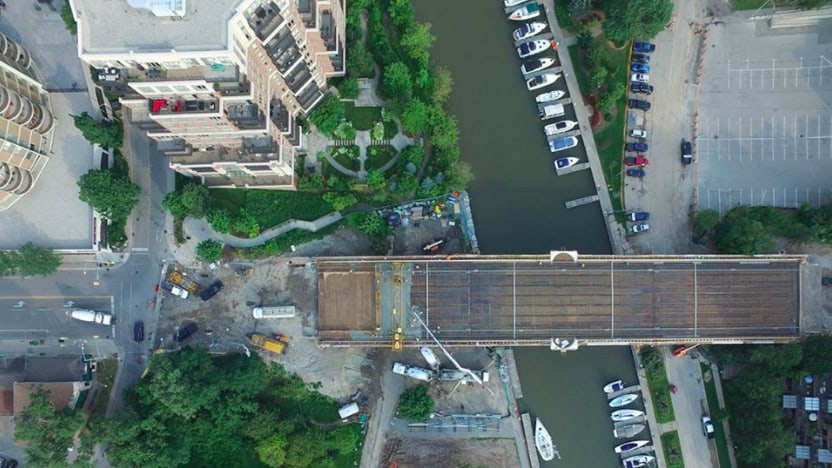 It’s finished and you’ll get to see it in all its glory on Friday, Oakville — the Lakeshore Rd.


It’s finished and you’ll get to see it in all its glory on Friday, Oakville — the Lakeshore Rd. Bridge reconstruction over Sixteen Mile Creek is going to be unveiled in time for the Santa Claus parade.

Repairs have long been underway in the south end of Oakville since the project began last January.

(We drove past it yesterday and the fencing will be down in a matter of days).

A ribbon-cutting is taking place on Friday at 3:30 p.m. (a commemorative plaque will be unveiled.).

The town’s vintage fire truck will be the first vehicle to cross the newly completed bridge.

The bridge will open to drivers, cyclist and pedestrians in both directions on Friday evening.

It will also be open for the Santa Claus parade on Saturday.

The Lakeshore Bridge reconstruction is ready ahead of schedule — work was expected to be completed by the end of 2017.

Here are photos of progress on the bridge a few months ago.

The existing bridge structure was constructed in 1967.

The completion of the bridge marks the first step in the rejuvenation of Downtown Oakville.

The Lakeshore Road Reconstruction and Streetscape project will begin in 2019 and be completed over a two year period.

With Lakeshore Rd. E. (Navy St. to Allan St.) coming to the end of its lifespan and needing a major reconstruction, the town undertook extensive research and public consultation to identify broader opportunities to improve traffic, beautify streets and improve pedestrian/cycle ways in the downtown.

The Lakeshore Bridge at Sixteen Mile Creek reconstruction happened in advance of the road project as inspections of the bridge revealed its condition warranted immediate attention.

There will also be a wider pedestrian sidewalk with a barrier wall to separate the sidewalk and vehicles.

New pedestrian railings and lookouts will be included as well as LED lighting.

The Lakeshore Road approaches to the bridge between Navy Street and Forsythe Street will also be reconstructed.

Parade-goers are encouraged to take the free Oakville Transit shuttle to the parade from Oakville GO, starting at 8 a.m.

Photos courtesy of the Town of Oakville