When the Canadian National Women’s Team takes to the ice in the upcoming 2022 IIHF Women’s World Championship, the roster will include a solid contingent of players from Oakville, Burlington, Georgetown and Milton.

Six players from Halton Region were named Monday to the national team that will look to defend its gold medal at the upcoming world championships, Aug. 24 to Sept. 4, in Herning and Frederikshavn, Denmark.

“It is unusual to play in a world championship and an Olympics in a single year, but this opportunity allows us to evaluate ourselves against the best in the world as we start our new four-year Olympic cycle,” said Kingsbury. “We are fortunate to have familiarity among our coaching staff and players who know what it takes to win.

“We had an extremely competitive camp and we believe we have assembled an experienced team that will give us the best chance to compete once again for a gold medal.”

Fast is one of seven blueliners named to the Canadian roster. The five-foot-four, 137-pound defender helped Canada’s National Women’s Development Team win a gold medal at the 2015 Nations Cup in Füssen, Germany.

The 27-year-old won the NCAA national championship with Clarkson in 2013-14 and was selected second overall by Toronto in the 2016 CWHL Draft.

Jenner, Maltais and Fillier are among the 13 forwards who will suit up for Canada.

Jenner is a veteran leader on the team. The five-foot-nine, 159-pound star won a silver medal with Canada’s National Women’s Under-18 Team at the 2008 IIHF World Women’s Under-18 Championship in Calgary, Alta.

Maltais (pictured below) won a silver medal with Canada women’s Under-18 team at the 2016 IIHF world championship in St. Catharines.

The 22-year-old, five-foot-three, 147-pound forward won a gold medal with Ontario Red at the 2016 National Women’s Under-18 Championship in Regina, Sask., and was named top forward.

Fillier, 22, was a member of Canada’s Under-18 team for a three-game series against the U.S. in Calgary in 2016. The five-foot-four, 137-pound forward won a gold medal with Ontario Red at the 2016 National Women’s Under-18 Championship in Regina, Sask.

Bach, 26, racked up four goals and three assists in five games for Canada at the 2014 Under-18 Women’s World championship.

Canada will play in Group A of the 10-team tournament with Finland, Japan, Switzerland and the United States. Group B includes Czechia, host Denmark, Germany, Hungary and Sweden.

Canada opens the event against Finland on Aug. 25.

Canada has won 11 gold medals and eight silver medals at the IIHF Women’s World Championship since 1990. 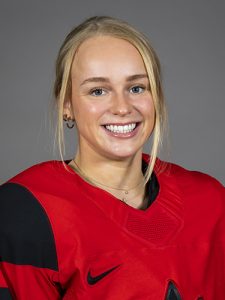