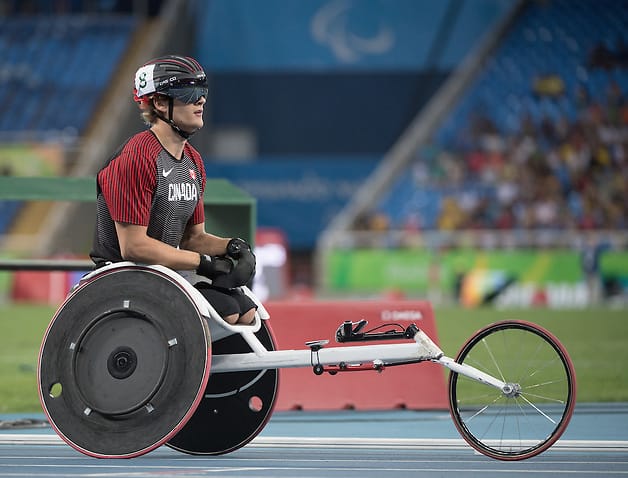 Oakville’s Austin Smeenk believes having a disability shouldn’t stop anyone from playing sports or doing chores.

The chores will have to wait for now as the Canadian wheelchair racer is set to compete at the 2020 Tokyo Paralympic Summer Games, beginning August 24.

Smeenk was born with spastic paraplegia, a hereditary disease that causes progressive stiffness and contraction in the lower limbs.

The 24-year-old, who is able to walk short distances, ride a bicycle and stand-up snowboard, has participated in several other sports including sailing and sledge hockey, but it’s wheelchair racing where he has found a good deal of success.

In 2014, Athletics Ontario presented him he with the Outstanding Male Track Events Performance of the Year Award.

“When I was a young boy, I just wanted to play sports, go fast and try new things,” Smeenk said on the International Paralympic Committee website.

“I really just didn’t want to be left out of sports at all.”

The Oakville athlete qualified for the 2012 Paralympic Games in London at just the age of 16, but having talked it over with his parents and coach (the late Ken Thom) decided to take a pass because of his youthful age.

Smeenk was also using a borrowed wheelchair at the time.

He would qualify to compete in three T34 events at the Parapan American Games in Toronto in 2015, but when he arrived he found out all three were cancelled due to lack of competitors.

Smeenk would make his Paralympic debut at the Rio 2016 Paralympic Games where he quickly served notice by making two finals. The Canadian placed sixth in the 100m and eighth in the 800m.

His success continued at the World Championships in 2017 where he just missed finishing on the podium with top-five finishes in both the 100m and 200m.

That success would finally pay off the next year at the Swiss Open. He would kick off the track season with a silver medal in the 100m and a bronze-medal finish in the 200m.

That progress continued in 2019. Smeenk would lower Canadian records in the 100m, 400m, 800m and 1,500m and would top off the year with three top-five finishes at the IPC World Championships.

The Tokyo Games run through to Sept. 5.