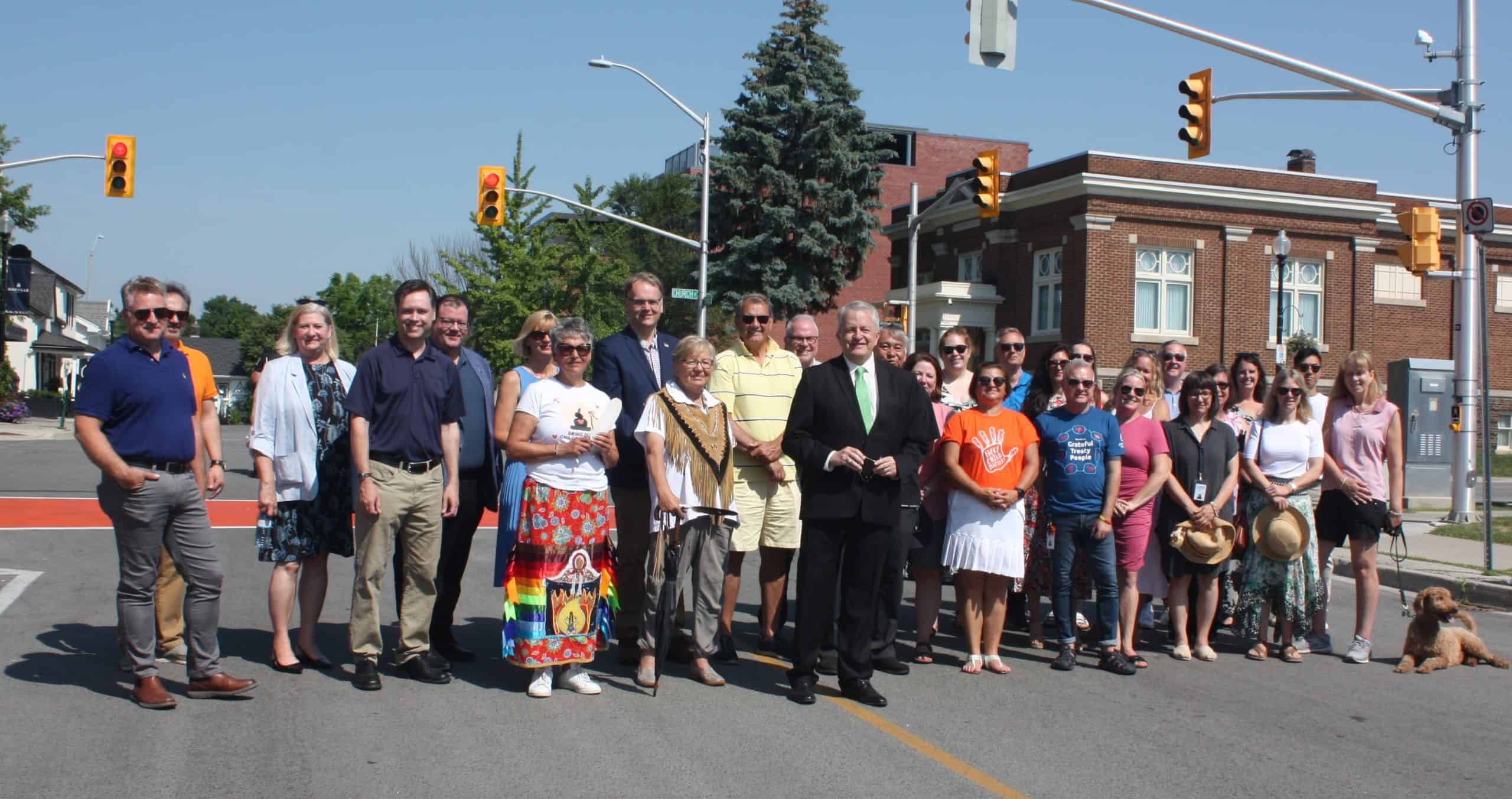 The Town of Oakville will be providing local residents the opportunity to recognize the residential school experience and learn more about Indigenous culture leading up to the National Day for Truth and Reconciliation, including visiting Oakville's first orange crosswalk at Thomas St. and Church St. TOWN OF OAKVILLE PHOTO

The Town of Oakville unveiled its first orange crosswalk Wednesday morning (June 22) in honour of children of the residential school system.

Located in downtown Oakville at Thomas and Church streets, the orange crosswalk was done in collaboration with the Mississaugas of the Credit First Nation and the Moccasin Identifier Project.

Oakville Mayor Rob Burton and members of Town Council were joined by Mississaugas of the Credit First Nation Gimaa Stacey Laforme and representatives from the Moccasin Identifier Project at the special unveiling.

The hope is the bright coloured crosswalk will provide those who come upon it an opportunity to reflect on all endured by Indigenous peoples in Canada as a result of the residential school system, as well take the opportunity to learn more about the treaty lands we are on and Indigenous culture.

“This orange crosswalk not only honours the children who never returned home from residential schools across Canada and the generational impact, trauma and oppression endured by Indigenous peoples in Canada as a result of the residential school system, but it also serves as a visual reminder of the important Truth and Reconciliation work that needs and must continue across Canada,” said Burton.

“The town’s remains committed to our Truth and Reconciliation efforts and an inclusive, diverse, and equitable Oakville.”

The unveiling was followed by a heritage walk lead by Indigenous Knowledge Guide Stephen Paquette and Sherry Saevil of Grandmother’s Voice to raise awareness of the legacy of residential schools, working being done in the community today, and the history of the Treaty Land on which Oakville exists, and the truth behind Treaties 22 and 14.

“I am pleased the Town of Oakville and the Indigenous community have taken this step in creating awareness of the Indigenous history of the land,” said MCFN Gimaa Stacey Laforme. “We were very excited to see this orange crosswalk and the intersection will feature the moccasin identifier, a project that works to promote indigenous cultural identity.

“We look forward to continuing on building our positive relationship with the Town of Oakville into the future.”

In the coming months, the intersection will also feature a utility cabinet covered in a design of four moccasins representative of the four linguistic groups in Ontario and a permanent interpretive sign at the southeast corner of the intersection to help people learn more about Indigenous culture.

“On behalf of the Mississaugas of the Credit First Nations, Chi-miigwech to the Town of Oakville for the work that they’ve done actively supporting Indigenous involvement,” said Carolyn King, Moccasin Identifier Project. “As the First Nation Treaty Holders that is very rewarding.

“It is also rewarding to see the crosswalk, to be able to participate here and establish the Moccasin Identifier signs on the utility boxes, and including the signage in the parks. These are all good steps towards reconciliation. Chi-miigwech again.” 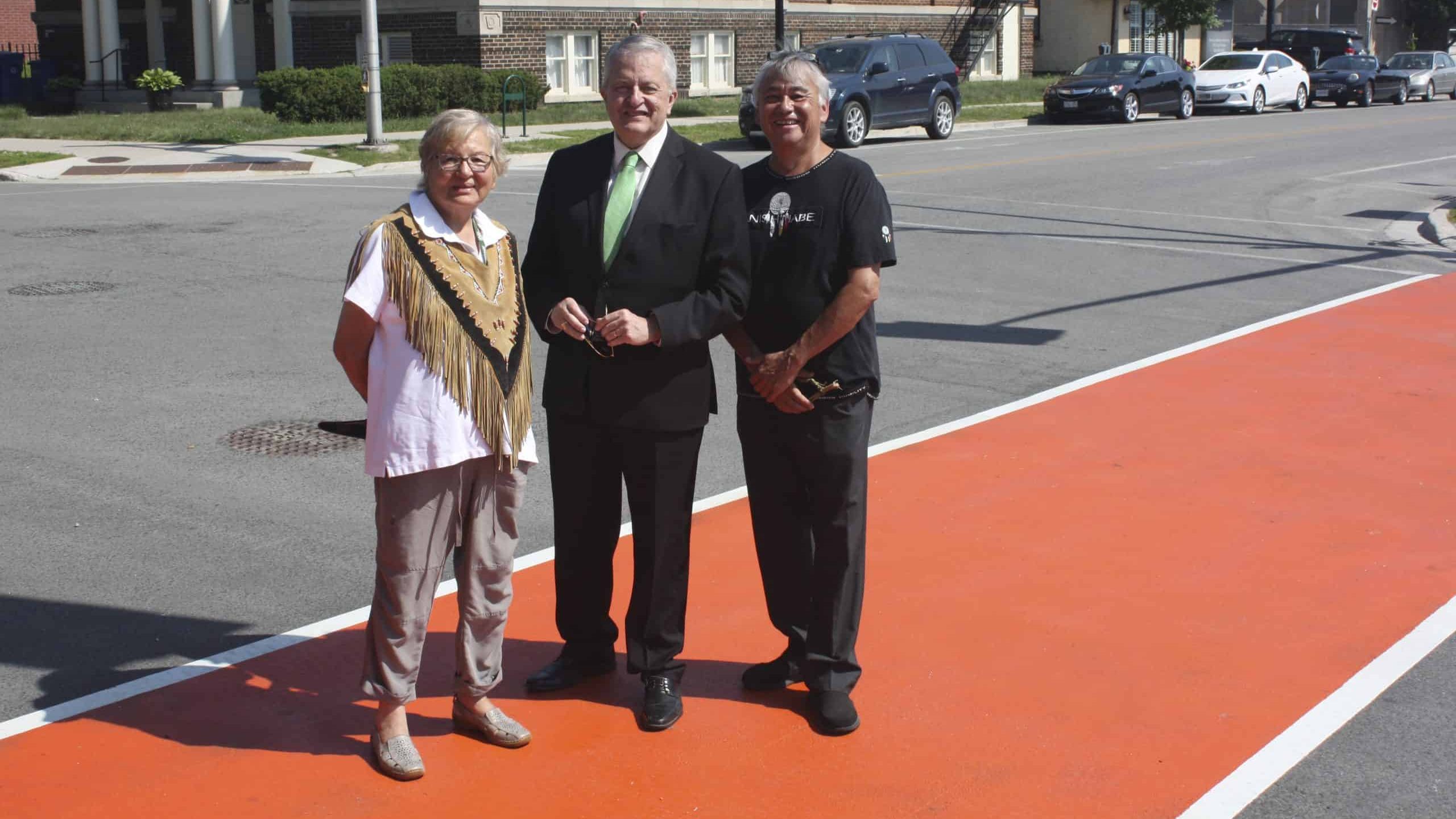