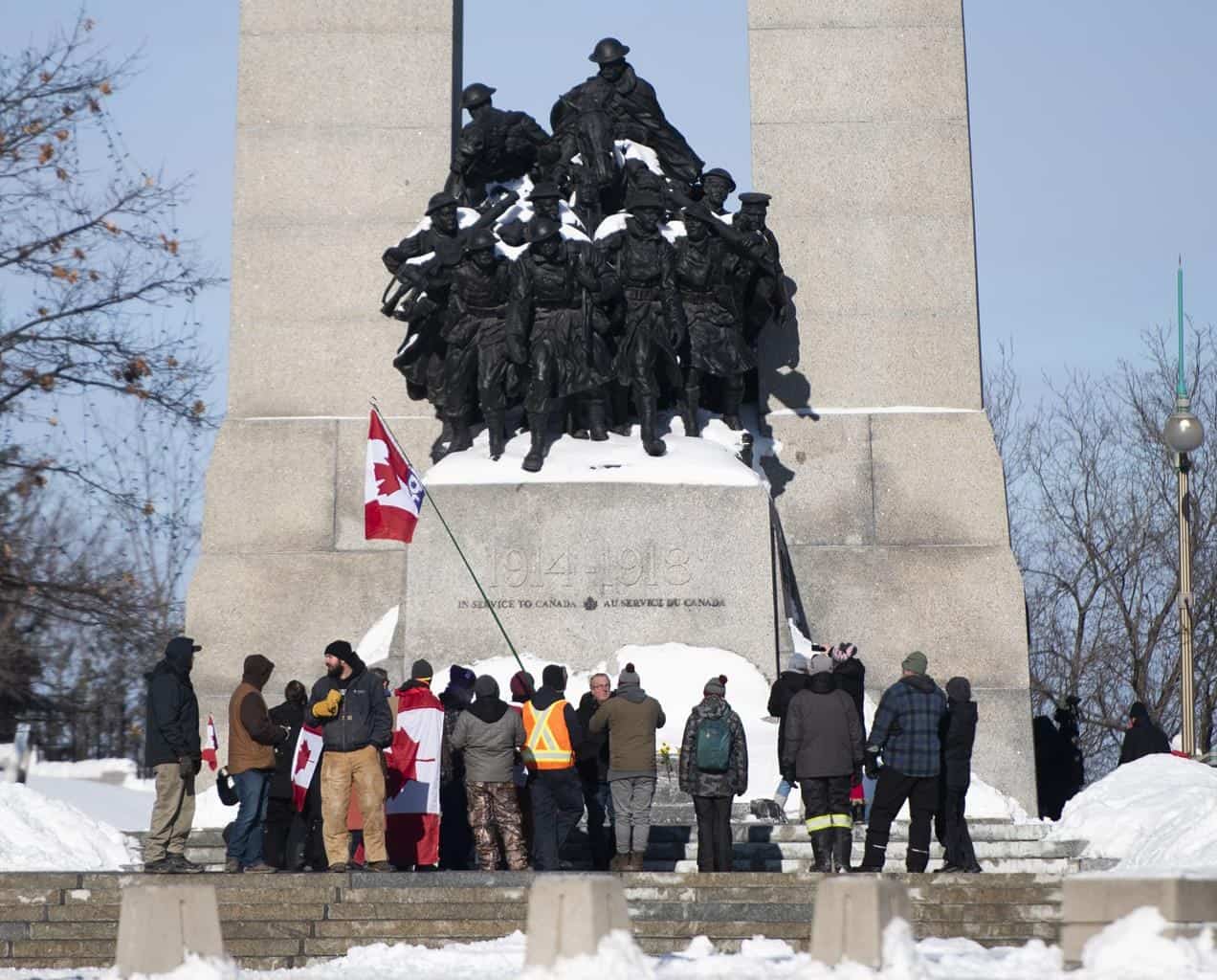 The federal government is facing fresh calls to boost security at the National War Memorial after images surfaced showing someone draping flags on the Tomb of the Unknown Soldier.

Pictures and videos of the event, live-streamed online Sunday night, depicted someone bowing his head at the tomb, which was covered with the American and Canadian flags.

Defence Minister and Oakville MP Anita Anand is calling out the “desecration” of the memorial.

“The right to protest is something those honoured at the Tomb sacrificed their lives for, however the desecration of this memorial is unacceptable and shameful,” she wrote on social media.

I am disturbed by yesterday’s events at the Tomb of the Unknown Soldier. The right to protest is something those honoured at the Tomb sacrificed their lives for, however the desecration of this memorial is unacceptable and shameful.

Nujma Bond, a spokeswoman for the Royal Canadian Legion, says the incident highlights the organization’s repeated calls for more security as the site has become a magnet for those protesting COVID-19 restrictions and the Liberal government.

An American flag draped on the Tomb of the Unknown Soldier in our capital all night long, being live-streamed (there’s always a grift with these twatwaffles). @OttawaPolice why was this allowed to occur? This is absolutely unacceptable. pic.twitter.com/Pa5zahkkat

These calls have been coming almost all year since the last incident at the Tomb. Back in January one of the “Freedom Convoy” antivax protestors danced atop the Tomb in the first day of protests before the three-week long siege of Ottawa the Convoy became.

Police ultimately did not charge or identify the woman, who they said came from out of province. That same day another protester urinated on the War Memorial also on the site.

The Tomb of the Unknown Soldier actually is a grave. It contains the remains of an unidentified Canadian who died in the fields of France in the First World War. He was selected from a Commonwealth War Grave near Vimy, site of the foundational Battle of Vimy Ridge. The soldier was laid to rest in Ottawa in 2000.

Sentries guard the Tomb from April to November from 9 a.m. to 5 p.m. everyday. One of these sentries, Cpl Nathan Cirillo, 24 from Hamilton, was murdered while on guard in 2014.

Cirillo, an eight-year veteran of the The Argyll and Sutherland Highlanders, was the sole fatality, besides the shooter, of the mass shooting on Parliament Hill that October.

The Ottawa Police Service has not yet responded to requests for comment from the Canadian Press. Public Services and Procurement Canada says it is currently reviewing camera footage of the flag draping incident.