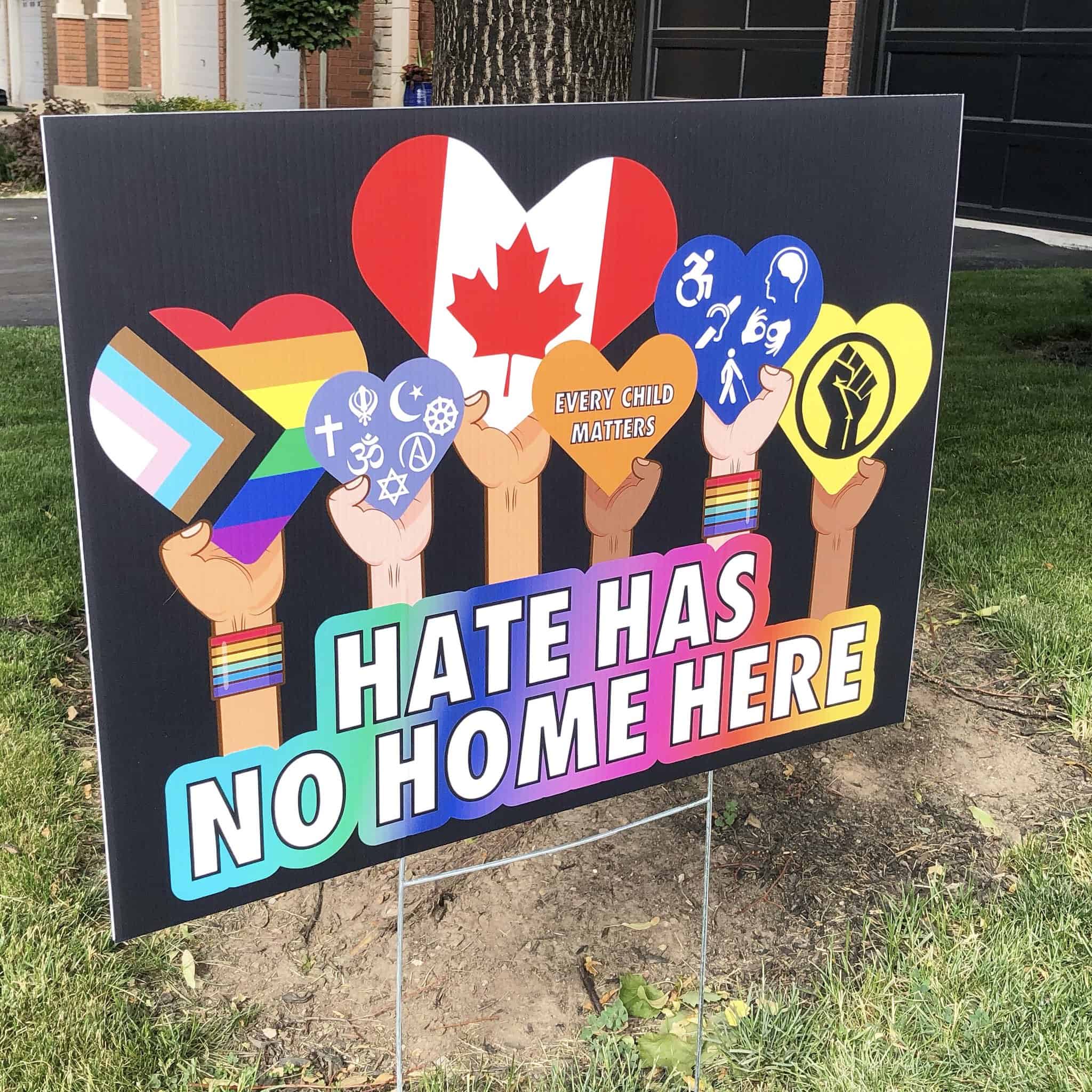 Oakville’s Nandhini Rangan wanted to do something.

First, she would learn of the unthinkable news that the remains of 215 indigenous children were found buried near the Kamloops, B.C. Indian Residential School.

The following week, her sorrow would deepen as a man would be accused of running down a Muslim family in London in his pickup truck.

“I remember watching the (news video) and thinking I take going for a walk for granted and step out of the house with my kids all the time,” Nandhini said. “It just really hit me. You could go for a walk and that could be your last walk.

“I just wanted really to put a sign outside of my house, so anyone who was walking past my house they would see the sign and know my house is safe for them and they are welcome.”

Nandhini found some “amazing” Hate Has No Home Here signs on line, but it still wasn’t what she was looking for. Wanting a sign that was inclusive, she thought of “hacking” together one.

She would post the sign idea on the Oakville Mommies Chat Facebook group she belongs last Wednesday night. By the time she woke up the next morning, there were some of 350 to 400 responses.

“It was fantastic. The community showed up,” said Nandhini, who would coordinate the growing sign campaign that has successfully spread throughout the community.

“It was overwhelming in such a good way,” she added. “I was like, ‘Wow!’ I did not plan for this, but it’s just the community wants to stand up and they want to do something, and it’s just fantastic.

“I take no credit for any of this. It was just something I wanted to do and it’s truly the community that is picking it up and paying it forward.”

Nandhini received help from Amy Ramsay and her partner Bianca Smalley designing the inclusive sign that includes support for Every Child Matters, 2SLGBTQ+, all religious faiths and Black Lives Matter among others.

“They created that beautiful final image you see floating around,” Nandhini said.

She worked with some printers to do up the signs and then spent the weekend hanging out at a Starbucks parking lot distributing the signs to all the moms who wanted them.

Also helping her to get out the word of the signs was local mom Stephanie A.G. Clark

“We were doing the local Facebook thing and then she posted it on Twitter and it started getting a lot of traction there,” Nandhini said.

Clark praised Nandhini on how her amazing initiative has sparked communities to come together. She hopes this momentum becomes a catalyst for meaningful action.

This first step was the easy part, say Clark. Now that their lawn signs are up, we need to ask ourselves: What comes next?

That might be making a donation to an organization that supports Black, Indigenous, Muslim or racialized communities. Reading a book like How to be an Anti-Racist by Ibram X. Kendi or calling out racism when we see it.

“We need to keep going and have the willingness to unlearn, and have those courageous and uncomfortable conversations about racism with our family, friends and neighbours,” Clark said.

“Dismantling racism and oppression is hard, constant work; and I hope communities find themselves moving away from being ‘not racist,’ and towards becoming ‘anti-racist.'”

Nandhini says she is no activist and no expert on any of these topics. There is so much going on and this is just her perspective.

“Putting up a sign in front of your house is very, very visible, so it’s very important,” she said. “It’s also a small thing you can do, but it is not the only thing. So putting up sign and (thinking), ‘OK, we’re not going to have another act of violence,’ that’s a little naive, right?

But it is one thing. Nandhini wants people to do whatever they can do to make a difference.

“Sign a petition, support equal rights on the frontline and actually try to make things happen,” she said. “We need to educate ourselves, I think that’s huge. One of the nice things about the sign is its so inclusive and there’s so many things on it.”

She says though we all know that Islamophobia exists, never in her wildest dreams did she ever think going for a walk with the family may leave them dead one day.

“Though the fear may seem irrational, many of us started thinking twice about going out for an innocent walk,” Khan said. “Seeing Nandhini come up with the idea of the inclusivity sign, the instant community support and eagerness for so many to obtain this sign is helping tremendously with the healing process and collective grief.

“I can’t speak for everyone, but it gives me hope that things will change and the next generation will do better. I hope that families who have decided to put up the signs are having those difficult conversations at home that will lead to inclusivity and love  in our community and our schools.”

Nandhini admits she’s baffled by just the idea that you can hate someone based on religion, the colour of their skin, where someone’s from or what their sexual identity or gender identity is.

“At the end of the day, we’re all human beings,” she said. “Ultimately we all want the same thing. Even the ones who are angry, all of us we want to find peace, be happy.

“We want to be safe. We want to be healthy. We all fundamentally want the same thing and hate doesn’t have really have a role to play there, right.”

To get a Hate Has No Home Here sign for your own lawn, go to http://wryandgingerstudio.com/digital-downloads.

There is more people can do to make a difference.

You can donate and contribute to the Legacy of Hope at legacyofhope.ca, First Nations Child & Family Caring Society at fncaringsociety.com/welcome, Paths to Reconciliation at pathstoreconciliation.canadiangeographic.ca and Project of Heart at projectofheart.ca.

Support can be shown to Muslim non-profit organizations by reaching out to https://www.nccm.ca and https://www.islamicreliefcanada.org.

To find organizations that do charitable work for 2SLGBTQ+ communities, visit www.rainbowrailroad.org or charityvillage.com/organizations/directory/lesbian-gay-bisexual-transgender-lgbt.