Oakville’s Sierra Gallant and Milton’s Noelle Henning will represent Canada at the upcoming 2022 Concacaf Girls’ Under-15 Championship in Tampa, FL from August 1 to 7.

The goaltending duo are among the 18 players selected to play for the Canadian soccer squad in its first international competition for the age group.

The Concacaf Girls’ U-15 Championship provides players like Gallant and Henning an important development step towards future Concacaf and FIFA youth competitions at the U-17 and U-20 levels and more importantly a step towards competing for Canada’s Women’s National Team at Concacaf, FIFA and Olympic tournaments.

Gallant, who is a member of the Vancouver Whitecaps’ Girls Elite Regional program, started playing soccer at the age of eight for the Oakville Soccer Club.

The 15-year-old will be making her debut in the Canadian youth program in Florida.

Henning (pictured below) started playing soccer at the age of five with the Milton Youth Soccer Club. The 15-year-old made her debut with the Canadian youth program this year.

She also represented Canada earlier this year at the 2022 Concacaf Women’s Under-17 Championship held in Dominican Republic in May.

Canada finds itself in League A alongside Costa Rica, Haiti, Jamaica, Mexico, Puerto Rico, USA, and Wales. Canada opens the championship on Monday, August 1 against Jamaica. They take on Puerto Rico a day later and then face USA on Thursday, August 4.

The top-two nations in Canada’s group will advance to semi-finals on Friday, August 5 to face either Costa Rica, Haiti, Mexico or Wales.

Canada has a record of 13 wins, two draws and two losses at three previous Concacaf Girls’ Under-15 Championships. They finished first in 2014, second in 2016 and then missed the semi-finals in 2018.

Of the 51 players who represented Canada at those three previous editions, 12 of those players have already had call ups to Canada Soccer’s Women’s National Team including Olympic champions Julia Grosso (2014), Jordyn Huitema (2014 and 2016), and Jayde Riviere (2016). 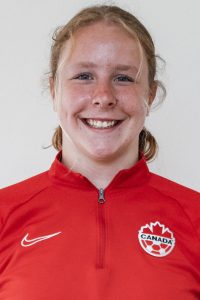