Oakville mayor’s ‘state of the town’ address includes a challenge 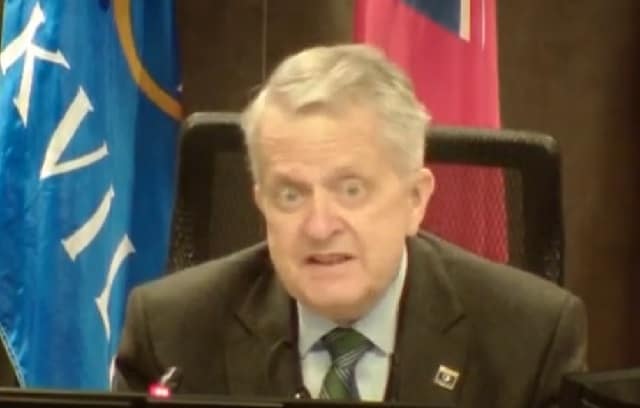 The talk was given virtually in a special council meeting on Tuesday evening (Oct. 19).

“Let me close with a question about the future of our downtown,” Burton said near the end of a 26-minute oration. “Everyone asks me, ‘when will Towne Square be redone?’ The answer is, we are ready to go. We want to make sure our downtown businesses have recovered from their sacrificies during construction, and during the (COVID-19) pandemic lockdowns, before we start more construction.

“The other question that I get a lot is, what happened to the rest of of the Think Big visioning for downtown that I called you all to be a part of eight years ago?” Burton added. “That led to a shared community vision for renewed and right-sized downtown cultural facilities: a new library, a new performing arts centre to fit our town today and tomorrow as we continue to grow our livability. A little theatre. A gallery for our artists. A parking structure with an attraction on top.

“Because this would be expensive, we empowered Oakville Enterprises Corporation and Oakville Municipal Development Corporation to generate new business dividends that could carry the cost of these projects without new tax revenues … The talented businesswomen and men on our boards have now achieved the critical mass to reliably expect these dividends. Therefore, I’m calling on the commmunity, and on council, to begin the process of the final design concept and timetable for the Downtown Cultural Hub vision.

“Let’s agree to take it from a vision to the next stage, and call it the Downtown Cultural Hub Project.”

Towne Square is a small public space at 210 Lakeshore Rd., whose redevelopment was approved in 2017.

Burton, who has been the mayor since 2006, centred the earlier portions of his speech around ways Oakville’s economy has avoided taking major hits from the COVID-19 pandemic. But the pandemic and the need to “stay alert to stay alive,” as Burton termed it, was the subtext for his talk.

“When we relax our vigilance, the virus blooms,” he said in his opening remarks. “The picture of persisting danger is what we should keep in mind as the background image for the portrait I want to paint of the state of our town. Our town’s toll from the pandemic has been much lighter than it’s been for Canada, for Ontario, for our partner and neighbour to the south (in the United States).”

Halton Region has attained the fourth-highest vaccine uptake out of the 34 public health units in Ontario. Some 86.65 per cent of the eligible population are considered to be fully vaccinated. However, the mayor expressed concern earlier this month that uptake in younger age groups is not as high. For instance, Halton has the 11th-highest uptake among 18- to 29-year-old young adults, for instance.

The $1.8-billion revamp of the Ford Motor Company of Canada’s Oakville Assembly Complex into a battery-electric vehicle manufacturing facility, starting in 2024, was one the economic gains Burton touched upon. He hailed the automaking giant, Prime Minister Justin Trudeau and Premier Doug Ford for “extraordinary cooperation” to make that happen when it was announced last October.

“Our town successfully advocated for government investment of $590 million to help Ford upgrade,” Burton said, referring to the combined investment from the senior levels of government.

Burton added that there was “surprising economic success” as the pandemic extended into the better part of a second year. He noted Oakville was named one of the best Canadian cities to invest in, by Site Selection magazine. Companies such as BDO Canada, the Samuel, Son & Co. steel firm, BMO (Bank of Montreal) and Kerr’s Canada have also opened campuses in town.

The mayor also pointed to the presence of biotech firms such as Green Sky Labs, Inc., as a proofs of a forward-thinking perspective in the community. One of GSL’s ventures that is being developed in Oakville, Burton, said is My Next Health, a genomics-based digital therapeutics company which seeks to significantly enhance patient outcomes and reduce costs. The CEOs of both ventures, Rehan Huda and Dr. Richard Heinzl, both reside in Oakville.