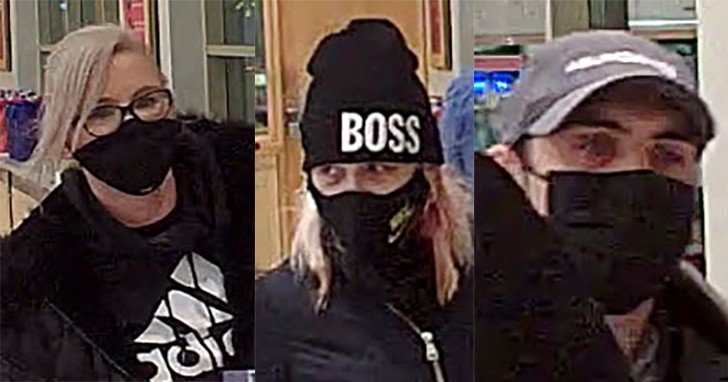 Halton Police are asking for the public’s health in identifying three people who stole $469.75 in liquor from an Oakville LCBO store.

On Wednesday Nov. 24 at 7:51 p.m., the three suspects walked into the store located at 251 Oak Walk Drive and lifted five bottles of liquor.

Suspect No. 1: Is a female described to be in her 40’s with a medium build, blonde dyed hair in a ponytail and sporting glasses with black frames.

She was wearing a black coloured waist length jacket with fur around the hood, a black t-shirt with “Adidas” written on the front, blue jeans and black boots with a fuzzy rim. The female suspect was also carrying a large black bag and was wearing a medical mask.

Suspect No. 2: Is a female described to have long blonde dyed hair with some pink dye. She was wearing a short black jacket, blue jeans, black shoes and a black toque with the letters “BOSS” written on the front in white.

The female suspect also had a large black coloured bag and was wearing a medical mask with the letters “NIKE” written on the left side.

Suspect No. 3: Is a male, described to have short brown hair and a short chinstrap beard. He was wearing a large baggy brown jacket, grey track pants, a grey coloured baseball hat with “ABUNDANCE” written on the front and brown hiking shoes.

He was also wearing a medical mask.