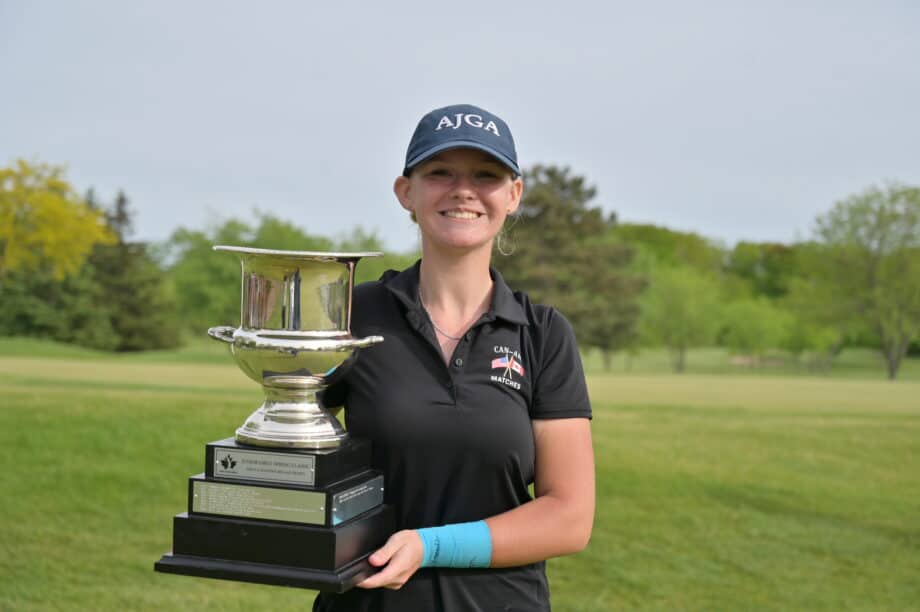 Oakville's Lindsay McGrath carded the low round of the tournament, a six-under par 66 to climb into a share of the lead at the Canadian Junior Girls Championship in Ottawa. GOA PHOTO

Oakville golfer Lindsay McGrath is tied for top spot and Burlington’s Sarah Gallagher is also among the leaders after two rounds at the 2022 Canadian Junior Girls Championship in Ottawa.

The 15-year-old carded the low round of the tournament Wednesday (July 27) with a six-under par 66 to climb into a share of the lead.

McGrath, who worked on her putting in the morning before the second round, recorded seven birdies, including on holes No. 1 and No. 18 to help her grab a share of the lead.

“Yesterday I was missing a lot of putts, so I put the work in this morning and was able to make a lot of short putts for birdie and save a lot for par. So, I think that really helped me today,” McGrath told Golf Canada. “My mental [game] was really good today; I was able to dial in on those putts and not feel any pressure.”

Gallagher is tied for eighth in the individual standings, just four shots off the pace after a second round score of 72.

A two under par 70 has Oakville’s Swetha Sathish tied with Gallagher. Burlington’s Emma Hanson fired a 71 yesterday and sits tied for 12 overall, three strokes behind the leaders.

With British Columbia up by three strokes, Sathish led the comeback. The Oakville golfer birdied three of her final six holes to lift Ontario to the title.

Sarah Gallagher contributed to the team efforts with back-to-back rounds of even-par 72. Along with Sathish’s two-under par 70 in the second round, the team combined for a total score of 289 and a five-stroke triumph over runner-up British Columbia.

A total of 70 players made the cut at 14-over par. The third round got underway Thursday morning.