Novel Review: 13 Ways of Looking at a Fat Girl in “Misery Sauga” 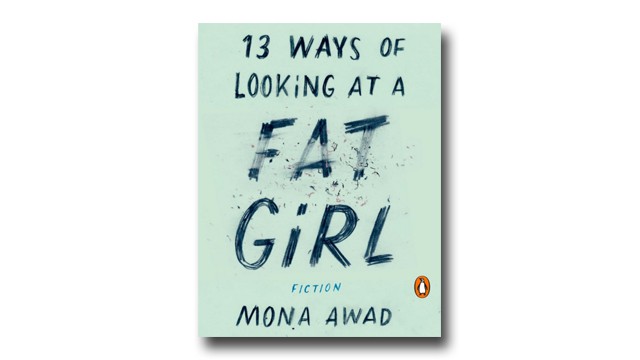 While sitting in a minimalist classroom at York in 2005 or 2006, one of my more affable and spunkier professors remarked that there’s never been a “great Toronto novel.”

That’s a bold — and probably subjective, to be fair — statement. Sure, I couldn’t think of the (or a) quintessential Toronto novel off the top of my head (and still can’t), but I knew that probably had a lot to do with my relative unfamiliarity with the stunning and easily available breadth of Canadian literature. A quick Wikipedia scan shows that a ton of gifted and acclaimed authors — Margaret Atwood, John Irving, Robertson Davies — have indeed set some of their fine and commendable works in Canada’s most famous city.

While his comment stuck with me (and I took it as a challenge that I have yet to face and perhaps never will), I didn’t think about it for years.

Until I saw the faint green cover of Mona Awad’s 13 Ways of Looking at a Fat Girl at the Erin Mills Town Centre Indigo on the new fiction table. Placed beside (not on) the illustrious table of Heather’s Picks, the novel, penned by a Montreal-born author who, the book tells us, is currently pursuing a Ph. D. in creative writing and English literature at the University of Denver, immediately grabbed my attention.

How does one look at a fat girl?

My interest was piqued further when the summary began with, “Growing up in the suburban hell of Misery Saga (a.k.a. Mississauga), Lizzie has never liked the way she looks…”

Naturally, I bought the book immediately and told my editor that we had to write something — anything — about a striking, bold and biting book set in our very own city. Was this a Great Mississauga Novel?

If there’s one thing Mississauga has a lot of, it’s people — diverse ones, too. It’s also no stranger to art and fiction, as even the Jake Gyllenhaal movie Enemy was set in the city.

But 13 Ways isn’t really about Mississauga specifically (which might be a relief to those who take issue with it only ever being referred to as “Misery Saga” throughout the duration of the novel). It’s about a relatable lived experience — the experience of growing up fat in a bustling suburb and achingly absorbing messages, both subtle and clear, about what makes a person (a woman in particular) worthwhile.

What makes a teenager, a young woman and a grown woman loveable? What makes her worthy of happiness?

To Lizzie, it’s being thin.

Lizzie (who later becomes, Beth, Elizabeth and Liz in her search for a new identity to match her ever-changing body) struggles to find love, often settling for scraps of affection and miserable, unhappy sexual encounters. Her stories about being a source of unwavering sexual and emotional support for men who won’t dare date her openly are tragically believable. Her farce of an online romance with a quadriplegic former soap opera star is particularly compelling, especially when she desperately begs her thin friend to take flattering full-body photos of her in pitch darkness so that she can be, in her mind, physically good enough for a man who is so open about his unfortunate and extreme disability.

In fact, Lizzie does indeed treat her weight as a shameful and ruinous disability, one that renders her unfit for real friendship, success and love.

When she manages to lose the weight, her journey only gets worse.

While the book is certainly centered on the first-world female experience, it’s relatable enough to affect a diverse swath of readers and biting and observant enough to amuse anyone. Anyone who has ever fought with their self-worth — fat or not — knows the pain of settling, of giving up, of passively agreeing to forever live as “less than” and demand nothing of others.

It’s a devastating book. Nothing too dramatic happens, not really. But the feelings it evokes and the truth it conveys is stunning in its sheer, brutal honesty. It’s refreshing to see fiction address these important and significant truths about the lived experiences of real women and do so without metaphor or insinuation or bashful, obscure wording.

This book is all jiggling thighs and shrunken breasts and shattered dreams.

And all, in part, seemingly inspired by an old Sauga McDonald’s.

If you get a chance, pick up the novel. Lizzie might not have anything good to say about Mississauga, but she doesn’t have anything good to say about anything or anyone, least of all herself. It’s a truly enriching, if not disturbing, look at a life lived through a narrow and oppressive lens — one that few, if any, of us can duck out of. Surely many people can relate, even if they were never a chubby teenage girl contemplating (albeit, not too seriously) blowing men for $50 in a local McDick’s.

The novel is more than worth the read. Check it out.