No grounds to charge officers in death of Regis Korchinski-Paquet: SIU 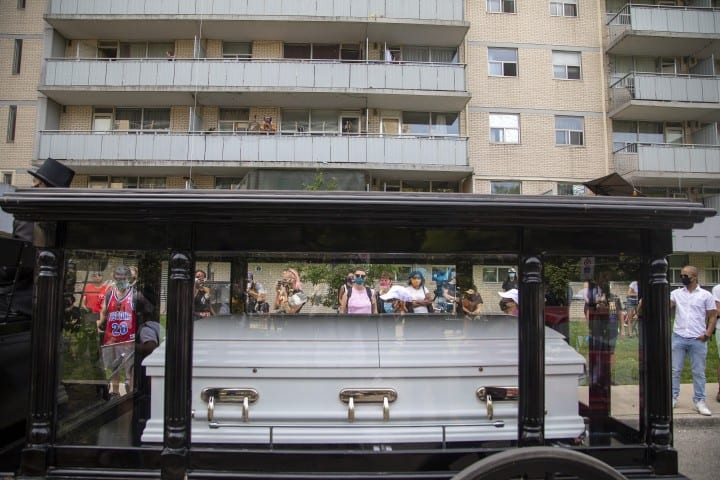 TORONTO — Regis Korchinski-Paquet fell to her death while trying to sidestep onto a neighbour’s balcony, said a report released Wednesday by Ontario’s police watchdog, which concludes there are no grounds to charge officers who were in her home at the time.

The lengthy report from the Special Investigations Unit notes that Korchinski-Paquet’s death sparked “important conversations” about the ways in which police interact with Black and Indigenous people, but says there was no evidence of police wrongdoing or “overt” racism in the incident itself.

Director Joseph Martino said race may have been a factor in the events leading up to the death of the 29-year-old, who was both Indigenous and Black, but that examining systemic issues in policing is not his role.

“The task before me was a narrow one — namely, to determine whether there were reasonable grounds, on the evidence collected by the SIU, to believe that any one or more of the officers who responded to Ms. Korchinski-Paquet’s apartment committed a criminal offence in connection with her death,” he wrote.

The Special Investigations Unit said six officers were in the 29-year-old woman’s Toronto home when she fell from the balcony in May, while her mother and brother were nearby.

The agency’s report says Korchinski-Paquet’s mother called police to the home because the two siblings were fighting — “bottles and punches had been thrown” — and she wanted both of them removed from the apartment.

It says Korchinski-Paquet and her brother also called 911 during the argument, which began as a dispute over the volume of the TV.

When the 911 operator asked about any mental health issues, the report says, the family indicated that Korchinski-Paquet had epilepsy and had had seizures earlier in the day.

It says that after police arrived, two officers blocked Korchinski-Paquet from getting to her mother and brother before allowing her back into the apartment so she could use the bathroom.

She then went out onto the 24th-floor balcony and prevented officers from joining her by holding her body against the door.

“Very quickly, Ms. Korchinski-Paquet scaled the balcony railing and the (subject officer) lost sight of her,” the report reads.

She then tried to scale the balcony and cross onto the adjoining one, which is when she lost her balance and fell to her death, the report reads.

The agency said no officers were on the balcony with Korchinski-Paquet at the time, and there’s no evidence the officers committed a crime.

Martino said that the officers seemed to be confused about whether epilepsy was a mental health condition and if they should or could detain Korchinski-Paquet under the Mental Health Act.

“The limited layperson’s research I have conducted of the matter suggests that epilepsy is a neurological disorder with manifestations that can be mental as well as physical,” Martino wrote. “Be that as it may, I cannot fault the officers for failing to take Ms. Korchinski-Paquet into custody prior to her scaling the balcony railing. She had not given them any indication that she wished to harm herself and was professing to be the victim of an assault at the hands of her brother.”

He also said the officers tried to de-escalate the situation between Korchinski-Paquet’s family.

The decision comes after the arm’s-length agency interviewed all six officers, along with 15 civilian witnesses.

The agency said investigators also received a written statement from Korchinski-Paquet’s father, with whom she had been speaking on the phone moments before her death.

Martino noted that Korchinski-Paquet died just days after George Floyd, a Black man in Minneapolis, was killed when an officer pressed a knee against his neck for nearly nine minutes, at a time when there was increased scrutiny over the relationship between police and racialized people.

In Toronto, thousands of protesters took to the streets on May 30, three days after the incident in Korchinski-Paquet’s apartment. Several smaller marches followed it over the next several weeks.

Two city counsellors then brought forward a motion to defund Toronto police, but it was struck down in favour of introducing body-worn cameras to the force.

The Toronto Police Services Board, the body that oversees the force, then launched a series of town halls to discuss systemic racism in policing, though many protesters said such information-gathering had been done before to little effect.

Toronto police and Korchinski-Paquet’s family were expected to comment on the SIU report at separate news conferences later Wednesday.

This report by The Canadian Press was first published Aug. 26, 2020.