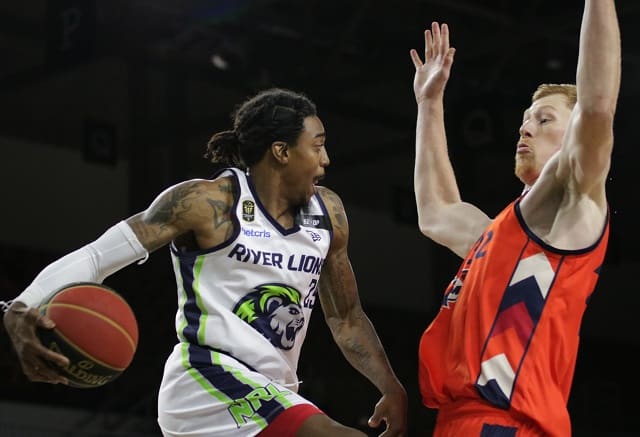 Phil Scrubb walked it off with a three-pointer on Friday night, sending the Niagara River Lions to their first Canadian Elite Basketball League final.

The CEBL’s semifinal between the River Lions and Fraser Valley Bandits, thanks to the league’s unique Elam Ending, reached an endgame where both teams were one basket away from the final. First Niagara was off the mark with two wild three-point tries, but got a defensive stop against Fraser Valley and seven-foot behemoth Brandon Gilbeck when a basket or two free throws would have sealed the outcome. Given a second chance, Scrubb got behind a ball screen from Javin DeLaurier, got behind his teammate’s screen, and drained the triple for an 84-82 victory.

The River Lions will face the host and reigning champion Edmonton Stingers in the final on Sunday (4 p.m., CBC, CEBL+).

It was a gutsy win by a Niagara team that had 11 days off before the semifinal and whose roster has been a moving target due to the NBA Summer League and European contract commitments. DeLaurier was the lone Summer League player to return, and the River Lions have lost the services of forward Tommy Scrubb, Phil’s older brother.

“We knew it was going to be tough, especially since we haven’t been together much as a team,” Phil Scrubb said. “But it’s a good test to go through this in the semifinals, because the finals are going to be a tough game regardless.”

PHIL SCRUBB with the winning basket for the @RiverLions to send them to the @CEBLeague championship final pic.twitter.com/lpj9eD2XKo

The top 2 teams in the league are going to the Finals #OurGame | #ChampionshipWeekend pic.twitter.com/p5FjmvYimS

Phil Scrubb, a former Canadian senior national team’s player who has signed to play in Russia this season, had 16 points and made four-of-10 three-point shots. Niagara got all of nine points during the Elam Ending from behind the arc. Ajax native Jaylen Babb-Harrison and CEBL U Sports player of the year Lloyd Pandi — off of a Scrubb kick-out pass — sustained Niagara with clutch triples that helped counter Fraser Valley’s attack.

Under CEBL rules, the game clock is turned off following the first whistle with fewer than four minutes left in the fourth quarter, and the teams have to hit a target score that is set at nine points above the leading team’s tally. Niagara, who were ahead most of the game, led 75-71 heading into the Elam phase.

“That’s a tough, tough basketball team (Fraser Valley) and they don’t quit,” said River Lions coach and general manager Victor Raso, a Hamilton native. “So we got ahead early, and they fought back. There’s just a feeling down there that it was going to be like, we weren’t gonna be able to pull away and we’re gonna have to win in the end. And, you know, luckily enough we did.”

Edmonton defeated the Ottawa BlackJacks 94-87 in the late semifinal.

Last season, Niagara lost in the first round in the playoffs. They were a semifinalist during the CEBL’s inaugural season in 2019.

The Hamilton Honey Badgers did not reach the championship weekend, but have not been left out. Hamilton guard Lindell Wigginton was recognized as the league’s top Canadian player and top clutch player on Thursday.