A past photo of the ice boom being towed to the mouth of the Niagara River on Lake Erie between Fort Erie and Buffalo. (Photo: Paul Pasquarello, NYPA)

For the past 58 years, an ice boom – a connected series of pontoons – has been towed by tugboat to the mouth of the Niagara River between Fort Erie and Buffalo just prior to the beginning of winter.

According to Andrew Kornacki, member of the U.S. Army Corps of Engineers, Buffalo District, the ice boom returned every year for the winter so that “large masses of ice are kept from flowing down the Niagara River, protecting property, the shoreline, and preventing water intakes from jamming at hydroelectric plants.”

The ice boom can restrict, but not eliminate, the release of Lake Erie ice into the Niagara River. In early winter, a
stable ice cover about a half metre (20 inches) thick usually forms in front of the ice boom, near where Lake
Erie empties into the upper Niagara River.

This allows water to keep flowing underneath the ice towards Niagara Falls and the intakes for the hydro plants on both sides of the border.

Kornacki says the boom “has been installed each fall since 1964 to accelerate the formation and stabilization of the natural ice arch, and reduce the frequency and duration of ice runs from Lake Erie into the Niagara River.”

“By reducing these ice runs, or ice floating down river, the boom diminishes the probability of large-scale ice blockages. These blockages in the river can cause flooding, damage to shoreline property, and a reduction in flow of water to the hydro-electric power plant intakes down river near Niagara Falls.”

The boom’s goals can be challenging during the winter months, when sub-zero temperatures produce an ice cover on Lake Erie that can be pushed around by winds to produce ice accumulations of up to 12 feet thick.

Kornacki notes the ice boom consists of 22 spans. The first four are located between Buffalo Harbor’s inner and outer breakwater, and constructed using 16, 15-foot-long mini pontoons. The remainder of the boom is constructed using a series of steel pontoons each 30-feet-long and 30 inches in diameter.

“Each span is built using up to 10 pontoons, anchored to the bottom of the lake at 400 foot intervals by 2.5 inch steel cables. When in position, the 8,800-foot ice boom stretches across the outlet of Lake Erie, just southwest of the city of Buffalo’s water intake crib.”

Kornacki said there are two options for the booms going in – either in by December 16 or when Lake Erie water temperature at Buffalo reaches 4C, whichever comes first.

The below graphic shows the placement of the 22 pontoon ice-boom. 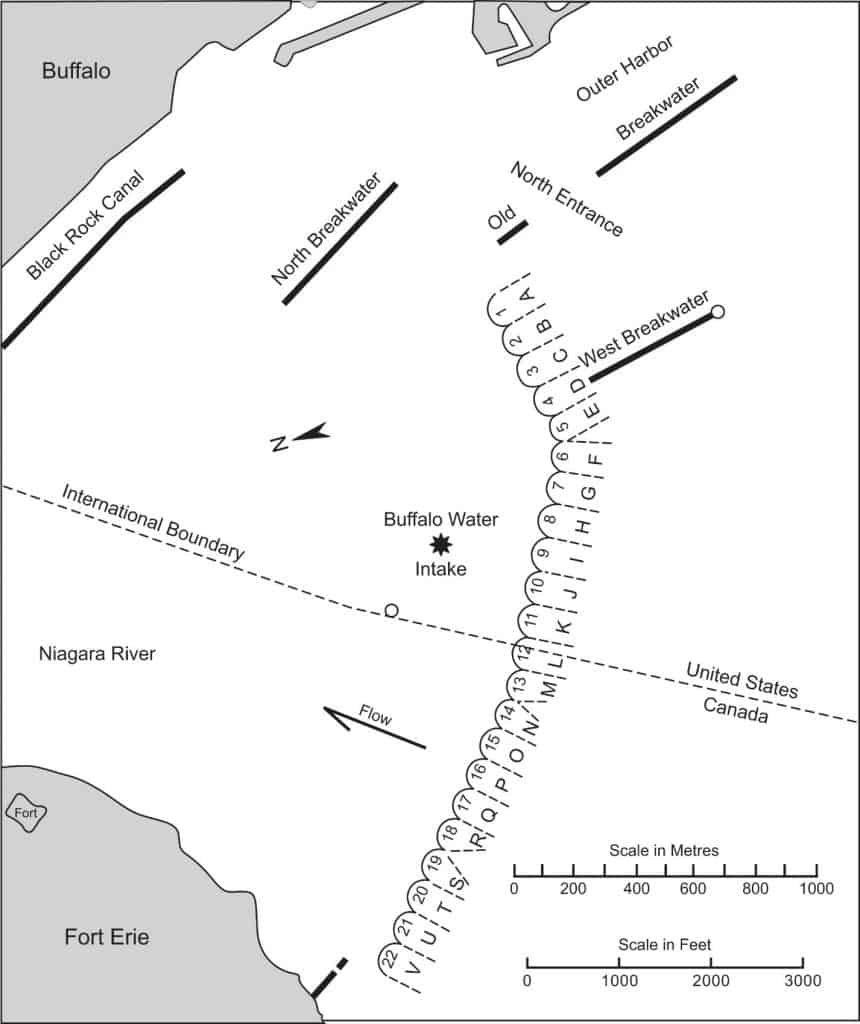