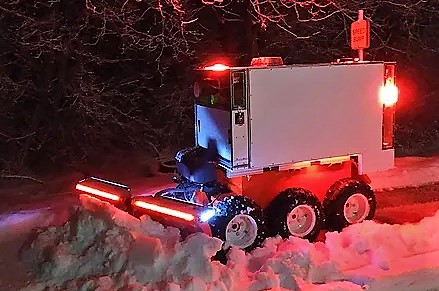 Fret not – they were supposed to be there. In fact, they were invited guests.

A number of municipalities already use the company’s robots to inspect sidewalks, clear snow and many other jobs within their capabilities.

In a release, Town CAO Marnie said that these mechanical sidewalk inspectors can actually do a more time-efficient job

“Typically, sidewalk inspections are quite labour intensive and take a significant amount of Staff time.”

“Utilizing Top Hat Robotics’ sidewalk inspection technology will speed up the process without forfeiting the results and allow Operations Staff to be redeployed to other tasks.”

“Also, the robot’s state-of-the-art depth cameras are accurate to within one millimetre – much better than traditional human judgement.”

Provincial laws dictate all municipalities must do an annual sidewalk inspection. With the help of the robots, NOTL were able to complete the task in the week of June 14 to 18 without using a single staff man-hour.

The robots were controlled by a Top Hat employee nearby using an operation system.

The Town’s sidewalk remained open while the task was being done.

But whether they’ll return in the Winter to do a little sidewalk clearing remains to be seen.