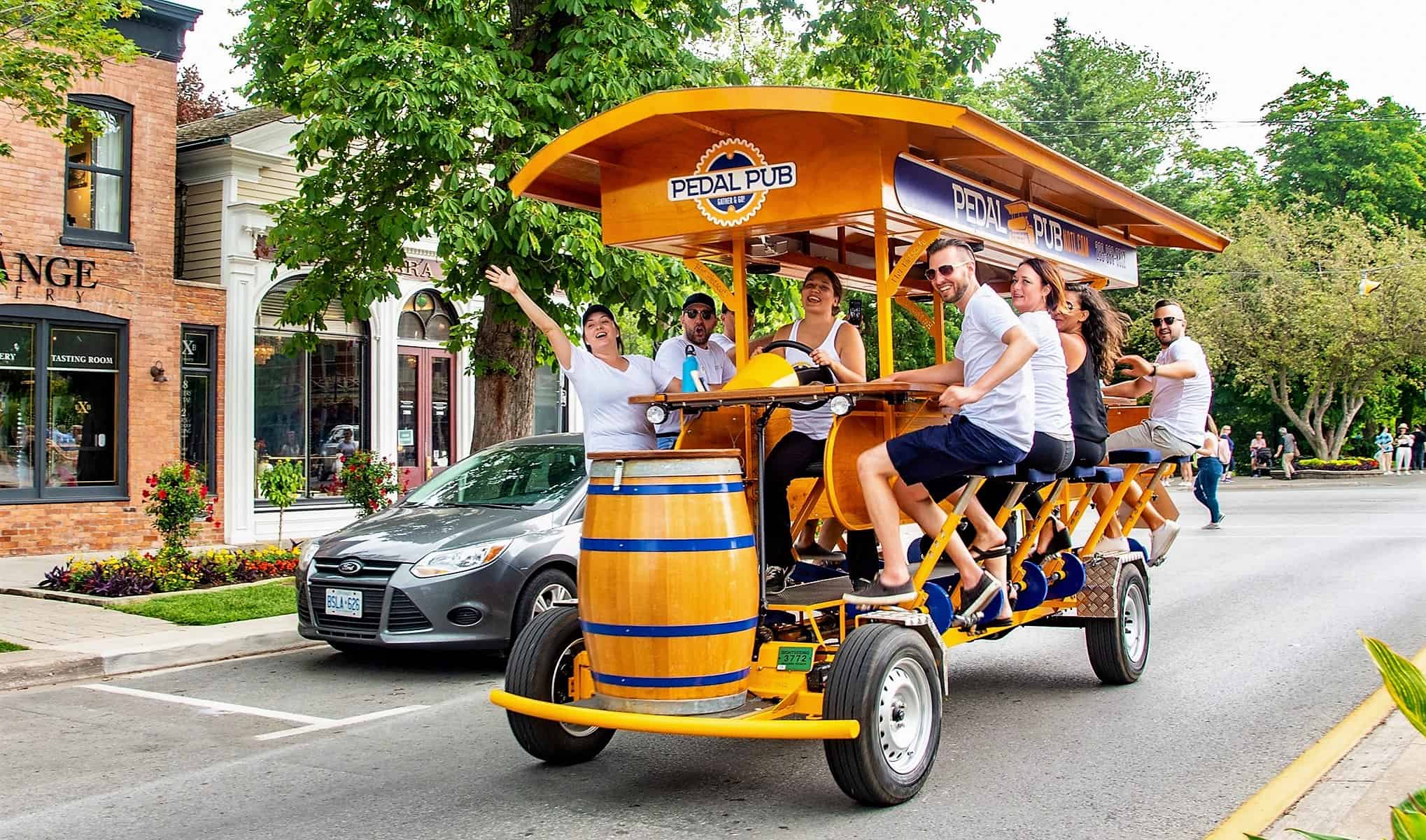 The General Manager of Pedal Pub made a personal plea to Niagara-on-the-Lake Council to renew their business’ licence at the July 12 Committee of the Whole meeting.

For the uninitiated, a Pedal Pub is one of those eight-seat bicycle-like vehicles fashioned to look like a wrap-around pub but, in fact, is not. No alcohol is consumed on the bike, despite its appearance and name, since that would run contrary to the Highway Traffic Act since they travel municipal roads.

Instead, what Pedal Pub does is take its passengers from place-to-place where they can stop for a quick bite or pint. And then, it’s back on the road and onto the next.

Where Pedal Pub Niagara-on-the-Lake ran afoul of the Town last year is that they initially included residential roads on their tour and got hit with noise complaints. The conveyance had music playing during its tours, which prompted the angry phone calls to Town Hall.

So last July, the NOTL Council voted not to renew the business’ licence when it expired in late-August 2020. However, just a few days before that expiry, the Council did a full-turn, allowing the business to continue until December 31, 2020.

So when the business appeared before the Council during that July 12 meeting, it was on bended knee.

Malo Saganski, general manager of Pedal Pub NOTL, told Council that her business “has had no road safety issues or incidents since we have been in operation. Pedal Pub Pilots (drivers) operate in strict adherence to the Highway Traffic Act and all applicable rules of the road.”

She told Council that as per their request in 2020, they adjusted their route and turned off the music near residential, giving the driver a chance to play up tourist talking points, instead.

“We no longer tour on residential streets and we stay off the regional road between (Niagara) Oast House (Brewery) and Stratus (Winery).”

From there, she shifted to presenting the benefits the business brings to the tiny tourist town.

Saganski continued, “We collaborate with many small businesses in the area including Butler’s Bar & Grill, Fournos (Restaurant), The Exchange (Brewery), The Budapest Bakeshop, and the Performing Arts Community to name a few.”
Despite their limited two-and-a-half month operating time in 2020, she said that Pedal Pub had proven “extremely valuable” to Niagara‐on‐the‐Lake’s small businesses and economy,

“Within only two-and-a-half months of operation, Pedal Pub gave over $33,000 of revenue to our (above-mentioned) partners while guests were on tour,” she said. “This revenue value is from the two-and-a-half hour tour only and does not include what guests spend before and after our tours while visiting NOTL including BnBs, Hotels, dining out, shuttle services (and) additional excursions.”

And, she said, Pedal Pub keeps it local.

“It is important to note that only local wines and beers are chosen for our guests. In doing so, this revenue also impacts local wineries and breweries.”

If Council chooses not to renew the business’ licence at the next Council meeting, she said it would be a mistake.

“Pedal Pub NOTL closing will have a ripple effect that will impact the NOTL economy,” Saganski said, as she presented them with letters and videos of support from the businesses they visit, as well as their Mary Street neighbours.