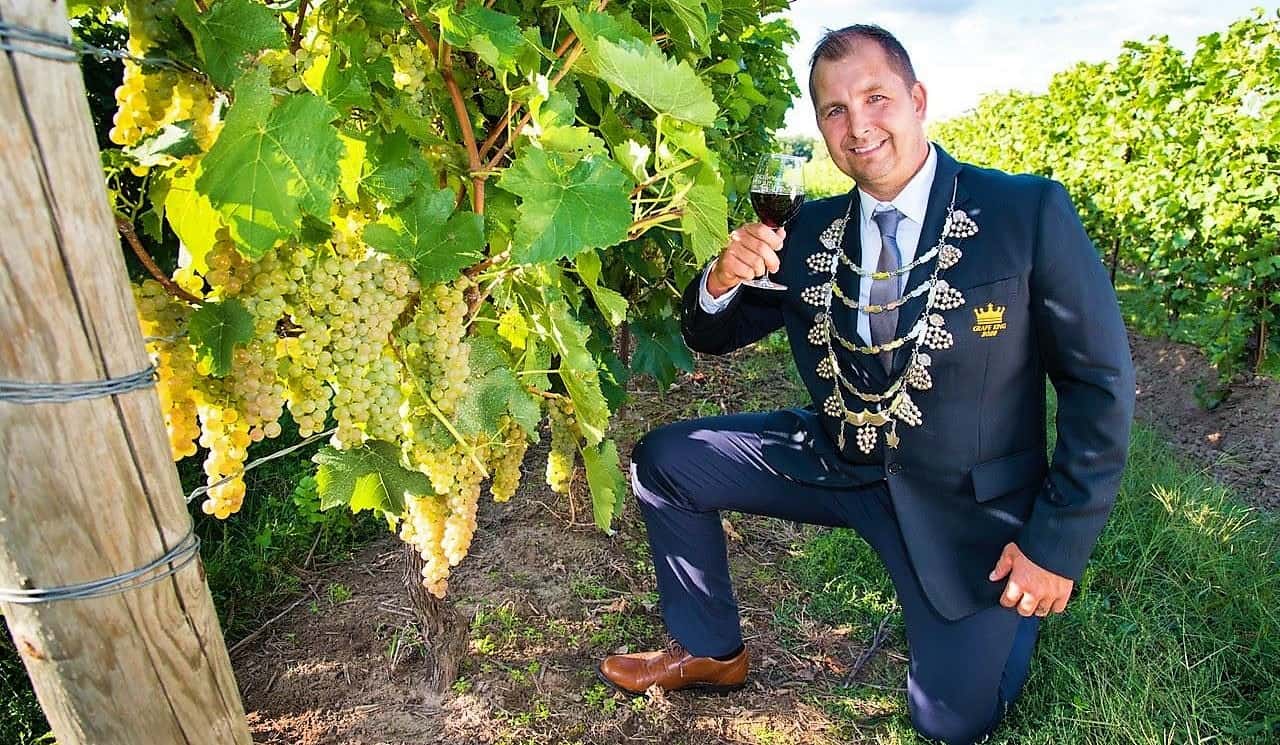 Benjamin Froese of Willow Lake Ventures Inc. in Niagara-on-the-Lake has been chosen by his peers as the 2022 Grape King. (Photo: Denis Cahill)

If you can forget about what’s happening in London, England at the moment, it seems Niagara Region is also dealing with a new king.

The Grape Growers of Ontario have selected Niagara-on-the-Lake’s Ben Froese as their 2022 Grape King, the 65th time someone has been selected.

Froese was honoured on Wednesday (September 14) at his grape farm, Willow Lake Ventures, in Niagara-on-the-Lake.

The Grape Growers of Ontario, as well as the Farm Credit Canada, who also took part in the selection, say the selection of a Grape King “is part of Ontario’s grape growing history and an annual tradition that dates back to 1956.”

Back in the day, it actually involved the recipient getting a crown and cape but these days, the King wears a chain that carries the names of all of the title-holders that came before. The groups say the title goes to someone based on their “vineyard management and knowledge of the industry.”

As well, Froese will serve as a representative for Ontario’s grape and wine industry at events across the country.

His duties are near-instantaneous as Froese will start with the Mayor’s Grape Stomp on September 17 in Montebello Park in St. Catharine, as well as the 70th annual Grande Parade on September 24 at the Niagara Grape and Wine Festival, also held in the Garden City.

Froese was born and raised on a tender fruit farm in Niagara-on-the-Lake before he graduated Niagara College with a four-year business degree and then travelled to New Zealand to accept a one-year co-op position in farming.

Returning from New Zealand, he chose to take over the family business at 20, following in the footsteps of his father, who passed away while he was in his late teens.

It was a family farm of peaches, strawberries and wine grapes before he decided to convert the entire farm into vineyards, which he has now doubled in size to 40+ hectares.

As an Arterra grower for the past 20 years, he continues to grow several different varieties of wine grapes, including ice wine.

Now married with four children, Froese is also the Zone Rep for the Niagara-on-the-Lake Minor Lacrosse Association and when he’s not tending to his farm, he is often found coaching lacrosse or hockey in the community.