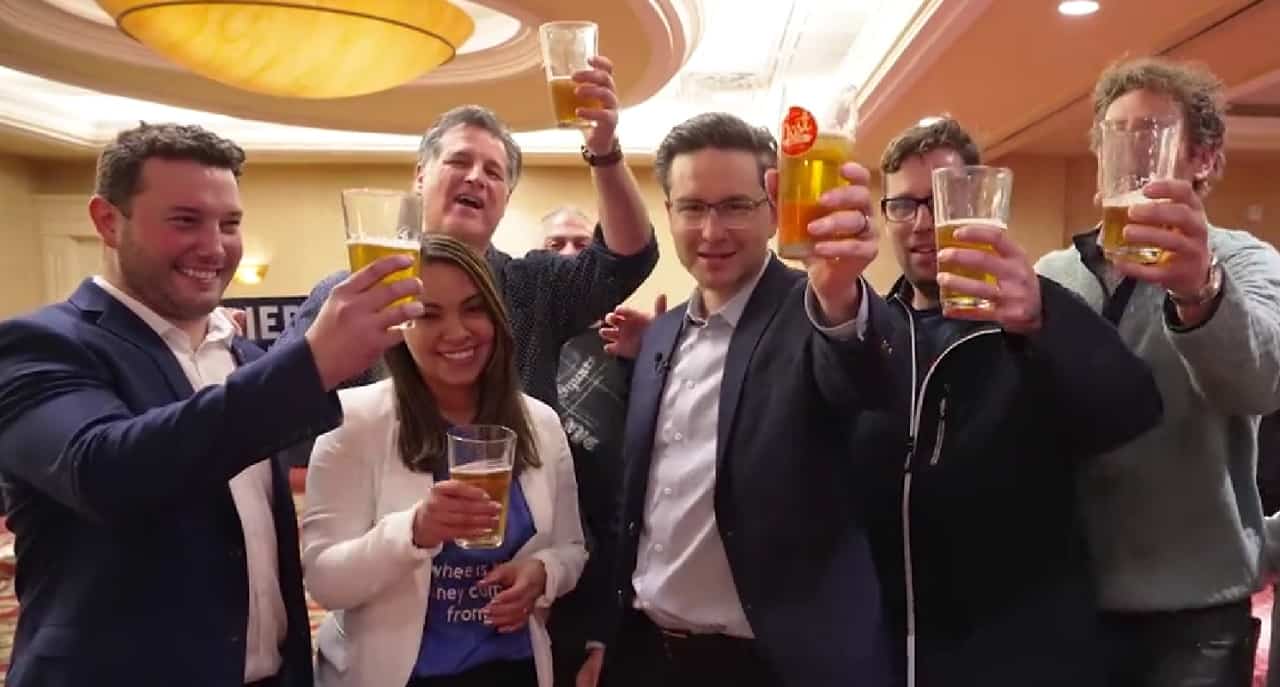 A craft brewer in Niagara-on-the-Lake says it had nothing to do with its wobbly pops becoming a political prop for Pierre Poilievre.

On Friday night, Niagara Oast House Brewers stated it had “zero affiliation” with the recent events the Conservative Party of Canada leadership contestant held in Niagara Region. Poilievre, a long-time member of Parliament who represents a suburban Ottawa riding, supported the blockade of downtown streets in the nation’s capital this winter before entering the CPC leadership contest. On Friday, his Twitter account posted a video where Poilievre, his spouse Anaida Poilievre and supporters held up glasses of Oast beer, with Poilievre claiming “if you drink this beer, it fights inflation.”

The Poilievre campaign has made the Bank of Canada, which controls the nation’s money supply, a frequent target during the rallies he has been holding in his bid to lead the CPC.

But Oast hardly seemed to appreciate the plug for its crafted suds.

“Just for the record our brewery had zero affiliation with Mr. Poilievre’s recent event in Niagara, nor were we even aware our beer was there until the tweet a few hours ago,” it said in a tweet. “Also, to clear up any confusion, this is definitely NOT our property in the video.”

Hi everyone, just for the record our brewery had zero affiliation with Mr. Poilievre’s recent event in Niagara, nor were we even aware our beer was there until the tweet a few hours ago. Also, to clear up any confusion, this is definitely NOT our property in the video.

The context to this hoppy hullabuloo was apparently brewed after the Poilievre leadership campaign held a rally on Tuesday in downtown Toronto, at the brewery where Steam Whistle Beer is made. At the event, Steam Whistle gave a printed statement to the media saying it “does not endorse (Poilievre’s) political views.” It noted “a number of different political candidates/parties from all three branches of government have rented our community event space(s).”

In the video on the MP’s Twitter account, that corporate boilerplate is paired with Poilievre criticizing “speech gatekeepers” and the “woke warriors.” The first minute-plus of the video shows a selection from a Poilievre speech, given on a raised stage in front of an tightly squeezed-in audience, where no one appears to be wearing a mask to help curb potential airborne spread of COVID-19. Poilievre criticizes the Canadian brewer, calling Steam Whistle’s expression of its rental policy “gutless and watered-down, like their beer.”

Then Poilievre and his spouse appear, flanked by an all-male group of six supporters. Having attacked Steam Whistle, he praises Oast.

“What we like about this beer, it’s called Oast, and Oast is a Niagara beer, beautifully brewed, and it is not watered-down,” Poilievre says. “It’s strong. Good, strong, powerfully tasting beer. And you know what, if you drink this beer, it fights inflation.”

The brewer has 8,827 Twitter followers, but tweets very selectively. The message distancing itself from the Poilievre campaign and its messaging was only the fifth tweet Oast has sent this month. Some have fewer than 10 likes.

“Can’t believe Poilievre waltzed in and tried to destroy the brand reputation of a successful Niagara business in seconds,” Porter wrote.

Can’t believe Poilievre waltzed in and tried to destroy the brand reputation of a successful Niagara business in seconds. Sorry this happened, @OastHouseBeer. #reckless https://t.co/Y5s7ynUam6 pic.twitter.com/fI1e5qo3OB

Oast had a 4.7 rating Google Reviews prior to distancing itself from a connection to Poilievre. Since making that statement, the four most recent reviews were all in the one-star denomination.

Located at 2017 Niagara Stone Rd., Oast calls itself one of the “original producers of traditional-style Farmhouse Ales.”Their location includes an outdoor patio and kitchener that serves food five days per week.

Oast says its intent is to craft “a unique product that derives both its character and distinction from the land.” Similarly, their Twitter bio exults “dirty hands, sore backs and obsession for craft.”

Poilievre has spent his entire adulthood in the political sphere. He was first elected to Parliament at age 25 in 2004, and qualified for a full MP’s pension when he was 31 years old.