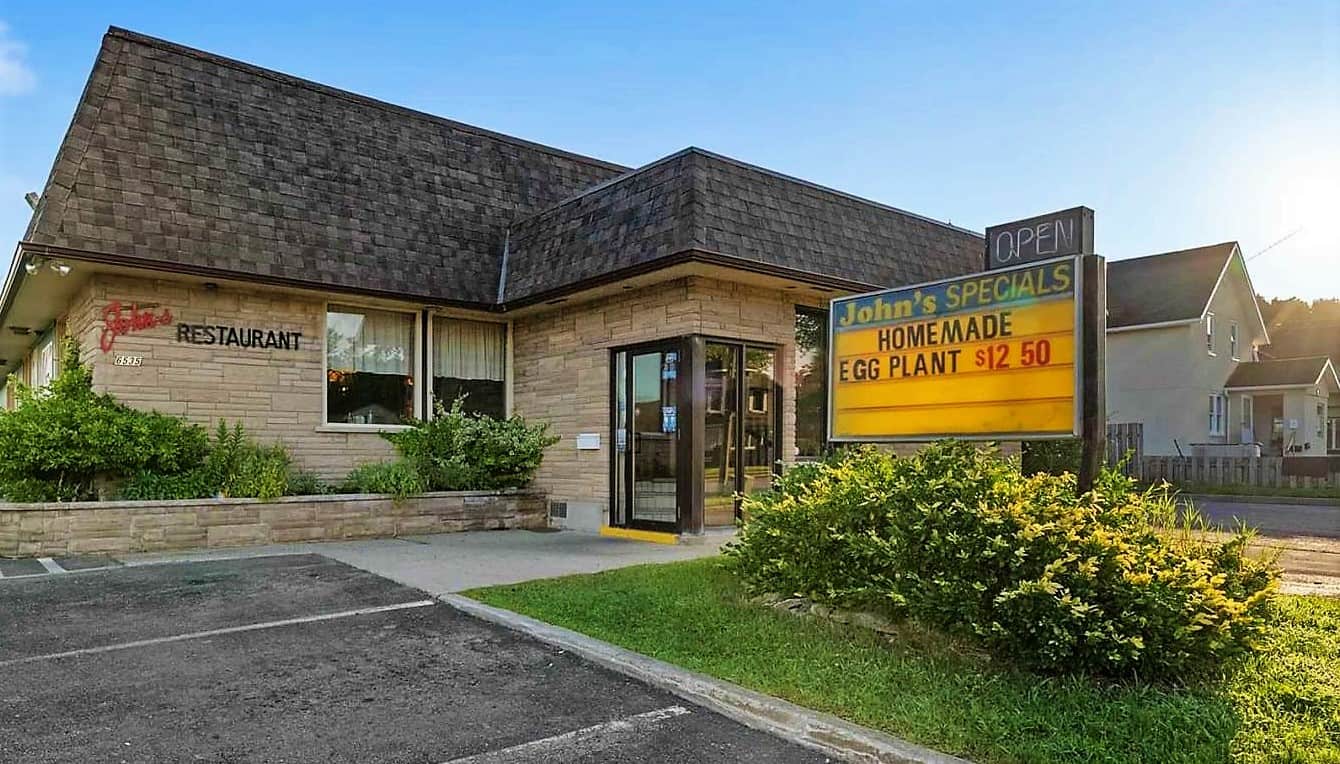 After 85 years, John's Restaurant at 6535 Thorold Stone Road in Niagara Falls will be closing on October 13.

John’s Restaurant, a true Niagara Falls landmark that served hungry diners for the past 85 years, is closing down next month.

Located at 6535 Thorold Stone Road in Niagara Falls, the eatery has long been considered one of the best and oldest restaurants in Niagara, serving up home-cooked “European and Canadian meals” since 1937.

A message on the door from owner John Fiedorek (shown below) indicated that it would be closing for good on October 13, one month from now. 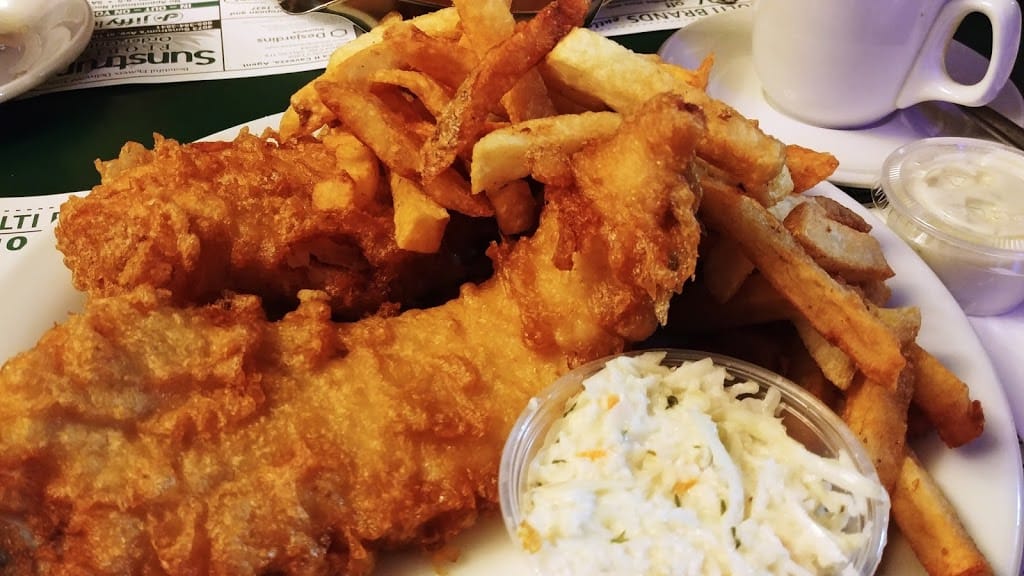 The fish and chips at John’s Restaurant, shown here, seem to be the biggest crowd pleaser.

They also offered a kid’s menu that included spaghetti and meatballs, grilled cheese and fries, junior hamburger, and chicken fingers.

All their pastas and sauces were “homemade in the Old World traditional style. All pastas are served with homemade soup or salad and fresh Italian bread.”

While they have a large lists of specialty, when the news hit a Niagara Falls Facebook page, the heavy favourite of the crowd was the eatery’s fish and chips. 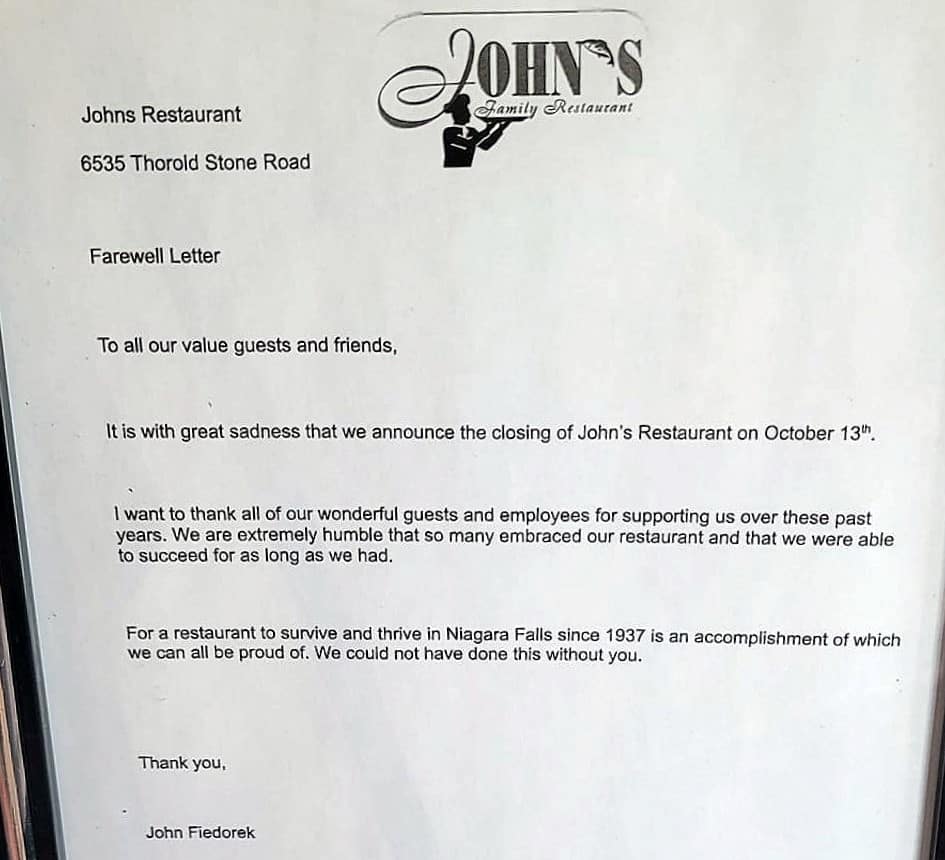 The letter posted on the front door of John’s Restaurant by owner John Fiedorek.

Oddly, while the location was briefly listed on a real estate page, that listing has since been pulled.

The Facebook posting invoked many sad responses but also pulled out some favourite memories of the iconic restaurant.

“Haven’t been in years but it’s a relic to the city, sad to see it go. Used to go with my great grandfather, good memories,” said one poster.

Another added: “My parents loved this restaurant and they always took me there when I visited them in Niagara Falls.”

A former neighbour said, “I used to stop in there every day after I finished my paper route. My last house was just next door. I always got a hot chocolate on the cold days. The lemon meringue pie was legendary. My grandparents loved going there on Fridays for fish and chips. Those are my main memories of John’s Restaurant.”

One poster lamented that he was sad seeing ‘Mom and Pop’ places  pushed aside. “There goes one more neighbourhood family restaurant. There are so few of them now. John’s, my family has eaten in your house more times than I can count since I was a little girl.”

She continued, “We have had take- out fish and chips and enjoyed your other fabulous menu items. With our children and grandchildren, we have dined often in your establishment. Your fish tank is a small piece of tropical heaven. We will miss you. The end of another era.”

Another lauded a seldom-mentioned treat. “Best coconut cream pie ever! Gonna miss it for sure.”

And finally, “So sad to see you go. It won’t be the same. The most delicious fish and chips, pies and breakfasts ever! And the staff is the best! A great big ‘thank you’ to all of you!”