Niagara Falls Comic Con back, Buffalo’s added to the roster 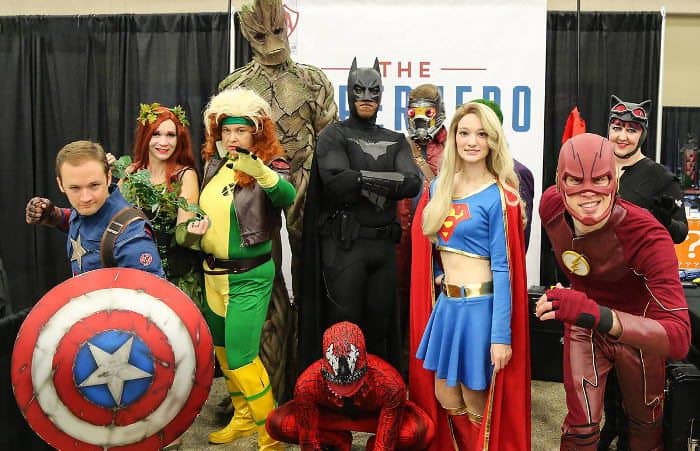 Avengers - and more - assembled at the 2016 version of the Nickel City Comic Con. (Supplied Photo)

The Niagara Falls Comic Con is smashing its way back into the Convention Centre this summer and this time, it has a superhero sister act just across the river.

The owners of the Niagara Falls Comic Con – Chris Dabrowski and James Ponce – announced the return of the annual event, which is coming June 9 to 11 this year, and will feature more than 35 celebrities.

However, the pair also recently announced they had purchased the ownership rights to the Nickel City Comic Con, the Buffalo version on the other side of Niagara River across the bridge.

That means Dabrowski and Ponce now run the annual summer/fall comic cons in Niagara Falls, Buffalo and Hamilton – a Tri-City Trio, if you will.

For the pair, picking up an American comic con has an immediate advantage. Celebrities who are reluctant to cross borders, even now in the latter stages of the pandemic, have no problem landing in Buffalo.

For the past couple of years, the toughest part of running the shows in Niagara Falls and Hamilton was securing celebrities with the border restrictions.

In the meanwhile, former Niagara Falls city councillor Dabrowski said to expect at least 35 or more celebrity names at the Niagara Falls one that kicks the three off.

“Everybody from Matthew Lewis from the ‘Harry Potter’ franchise, to Cary Elwes who is best known for ‘The Princess Bride’ and ‘Saw’, Giancarlo Esposito from ‘The Mandalorian. We have professional wrestlers, horror legends, sci-fi, you name it,” Dabrowski said.

“If they’ve been on TV or the big screen, you might see them at Comic Con.”

Once the Niagara Falls Comic Con is over, Dabrowski and Ponce can turn their attention to the Nickel City Comic Con running June 30 to July 2 at the Buffalo Niagara Convention Center.

Then the troika will be finished off with the Hamilton Comic Con, which is set to take place over two days on September 23 and 24 at the Canadian Warplane Heritage Museum.

For the Niagara Falls version, VIP or Ultimate VIP ticketholders will get added benefits, allowing them to get in 30 minutes before the general public, bypass celebrity lines, and have preferred seating at panels.