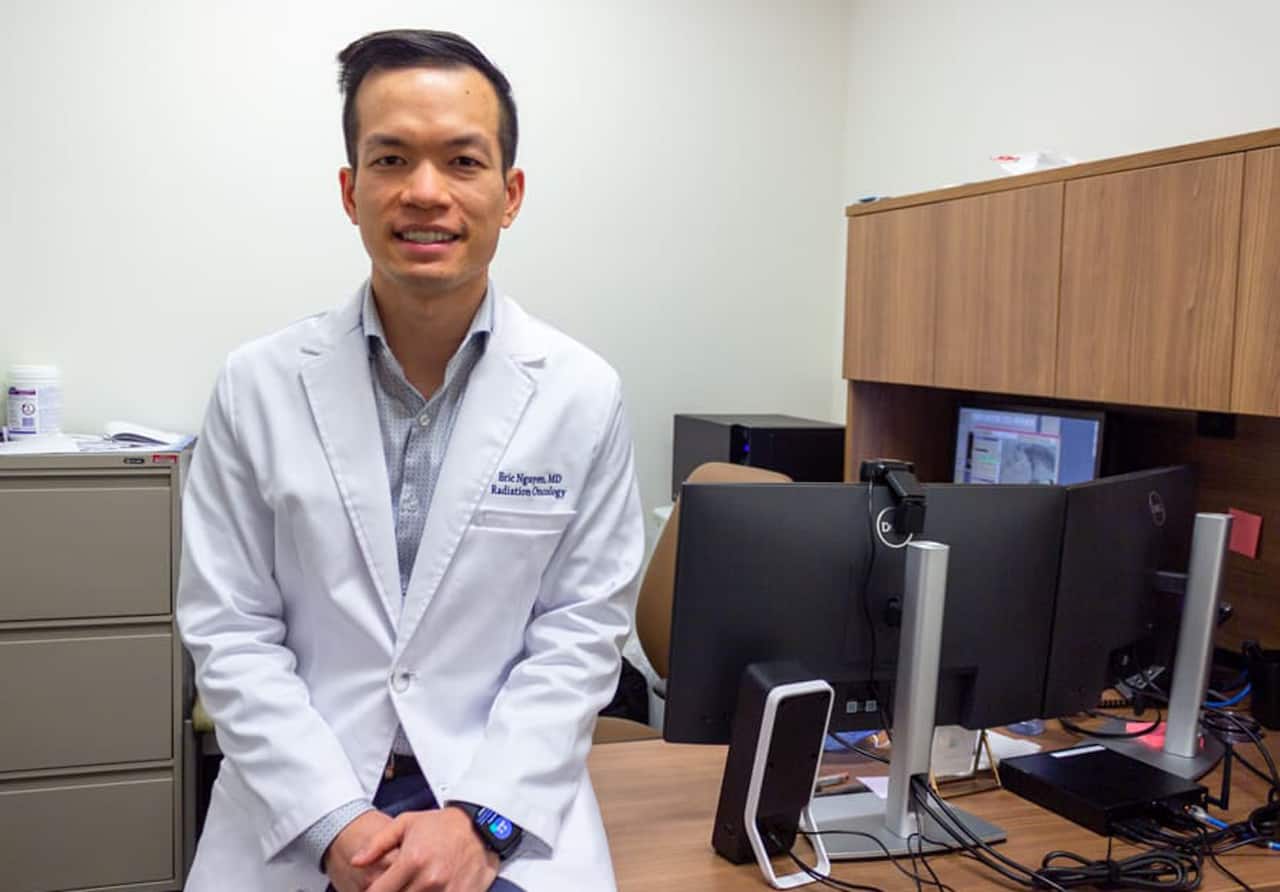 Research from a Niagara Region doctor will help cancer patients around the world.

Niagara Health’s Dr. Eric Nguyen, a radiation oncologist at Walker Family Cancer Centre, has found that a form of radiation therapy can be used more aggressively to treat lung cancer than previously thought.

Nguyen compiled data about undue side effects using stereotactic body radiation therapy to treat both primary lung cancer and metastatic disease in the lungs. He found that this type of radiation can be used with a low risk of toxicity or complications, even when treating multiple tumours at once.

This treatment can delay disease progression in metastatic cancer patients with multiple lung tumours, and it can be used more aggressively and be curative for primary lung cancer lesions.

Nguyen findings will help cancer doctors around the world make better informed decisions about their patients’ treatment plans, especially those with multiple tumours.

“We’re able to treat these patients with this targeted treatment and delay the need to go on chemotherapy or the next line of systemic treatments,” Nguyen says. “It just provides more options when treating this group of patients.”

This type of radiation uses precisely focused and intense radiation beams to treat tumours while minimizing damage to healthy tissue.

Previously, cancer doctors may have used chemotherapy because of the lack of information about the side effects of stereotactic body radiation therapy for multiple lung tumours, whether for primary cancer or metastatic disease, which has spread from elsewhere in the body, Nguyen says.

Nguyen presented his findings at conferences in both the U.S. and Canada, including at the Canadian Association of Radiation Oncology (CARO) Annual Scientific Meeting. They will also be published in an upcoming edition of the International Journal of Radiation Oncology, Biology, Physics.

He compiled the data using information from 190 patients during his year-long fellowship at Toronto’s Sunnybrook Health Sciences Centre last year.

Until his arrival, patients with primary or metastatic spine and brain cancer would have to travel outside Niagara for treatment.

Nguyen also amassed the most data yet on treating bone metastases outside of the spine and determined radiation oncologists could use stereotactic body radiation therapy to control bone metastases with low risk of side effects, including fractures.

Having this radiation as a safe, effective option for treating bone cancer is significant because patients often experience pain and discomfort when the disease metastasizes.

It can also stabilize or slow the cancer in an affected area of the body so a patient can continue with their current systemic treatment, such as chemotherapy or immunotherapy.

In some cases, the treatment could be used to aggressively treat metastasized bone cancer without requiring additional systemic treatment.

“We are seeing a lot more patients living with metastatic cancer. It’s no longer a death sentence,” Nguyen says. “But a lot of times, they develop other symptoms that affect how they live. That has always been an interest of mine and why I did the research.”

Nguyen plans to continue this research, next looking at other metastasized cancers and palliative situations. His work will be centred at Niagara Health while collaborating with researchers at other hospitals such as Sunnybrook, Juravinski Cancer Centre, and London Health Sciences Centre.

ICYMI: Radiation Oncologist Dr. Eric Nguyen has found that a form of radiation therapy can be used more aggressively to treat lung and bone #cancer. His #research will help guide planning patient treatment, especially for those with multiple tumours: https://t.co/yZyfR65yJ8 pic.twitter.com/v8EYq31dK8