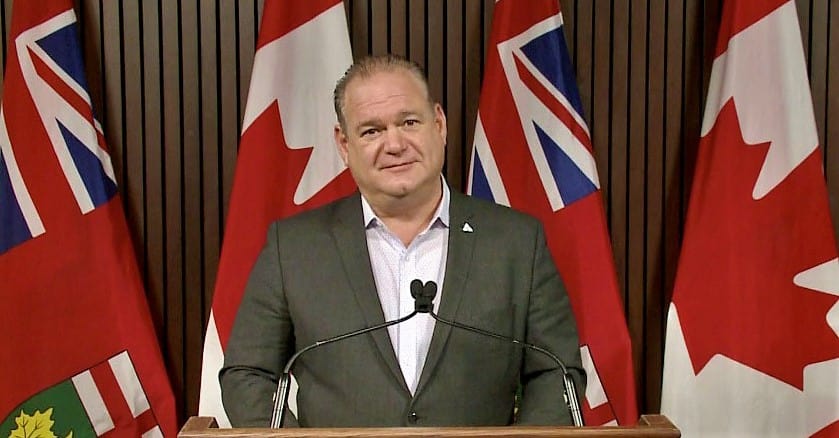 Burch released a statement saying the Ford government is still refusing to sit at the table with the Optometrists Association of Ontario to hammer out a deal.

Burch said, “Families in my riding and across this province no longer have access to OHIP-covered eye exams (after the September 1 deadline came and went).”

“Despite months of advance notice and years of building problems, the Ford government is refusing to work out a deal with optometrists, leaving the eyecare of Ontario families in the lurch.”

Burch continued that area seniors were calling him, worried that they cannot receive eye exams after crucial eye surgeries, putting their recovery under threat.

“I’ve heard from diabetics (who are) gravely concerned they’re going to lose their eyesight.”

Burch continued that eyecare “is health care. But in Ontario right now, no one under 20 or over 65 can receive an OHIP-funded eye exam, even if they have insurance.”

“The Ford government must get back to the table with optometrists and put proper funding in place to ensure that children and seniors receive the eye care they need.”

Mike Schreiner, Leader of the Ontario Green Party, contacted insauga recently to add, “I call on Premier Ford and Minister Elliott to immediately commit to funding the operating costs for OHIP funded services provided by optometrists.”

“All optometrists are asking is to break even when providing these vital services.” At the moment, optometrists are saying they personally pick up 45 per cent of the costs of every visits since the government has only raised the OHIP portion $5 since 1989.

However, last month, Alexandra Hilkene, Elliott’s Press Secretary, contacted insauga to refute some of the Optometrists Association of Ontario’s (OAO) claims that the Ford government was not negotiating in good faith.

Hilkene said Elliott said in her own statement, “I want to be clear that our government will continue to fund these optometry services through OHIP. Any decision to withdraw services is the decision of individual optometrists.”

The minister concluded, “The College of Optometrists of Ontario has made clear that if an individual optometrist decides to withhold care from a patient, they are expected to take steps to ensure the patient can continue to receive appropriate care.”