While the proposed townhouse development in Streetsville may have elicited concerned feedback from residents, at least procedures are being followed and Dunpar appears to be at least listening to them. Some say that the same cannot be said for the next application that came forward to Planning and Development Committee (PDC) last week.

The application in Mineola West, near Port Credit, came from Queenscorp Inc. They requested permission to build 17 townhomes and one detached home on a private condominium road on 1142 Mona Road, on the west side of this road north of the CN railway. Below is the aerial view of the proposed site, which is the inverted L shaped portion. 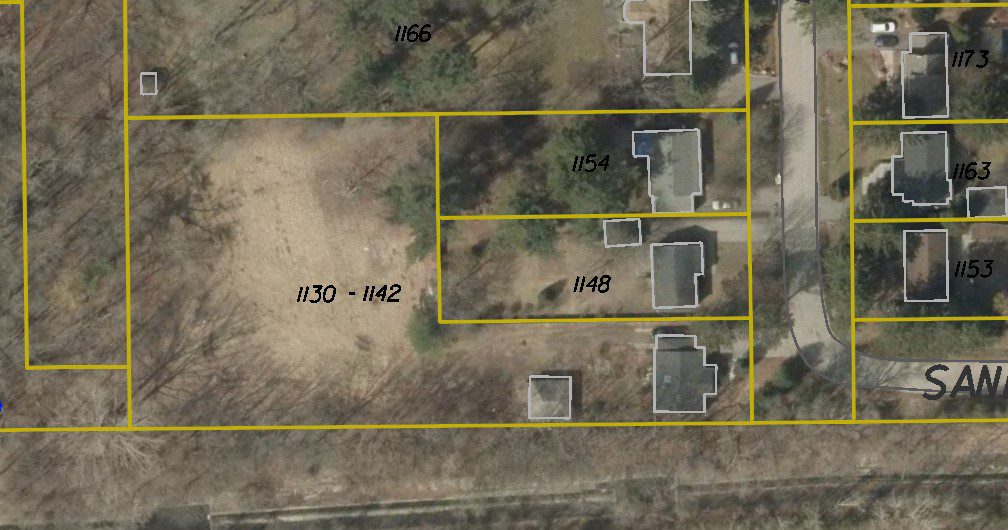 Below is the current condition of the property in question; this is the proposed entrance to the underground garage for the townhouse complex from Sandham Road:

And this is what Queenscorp is asking to build: 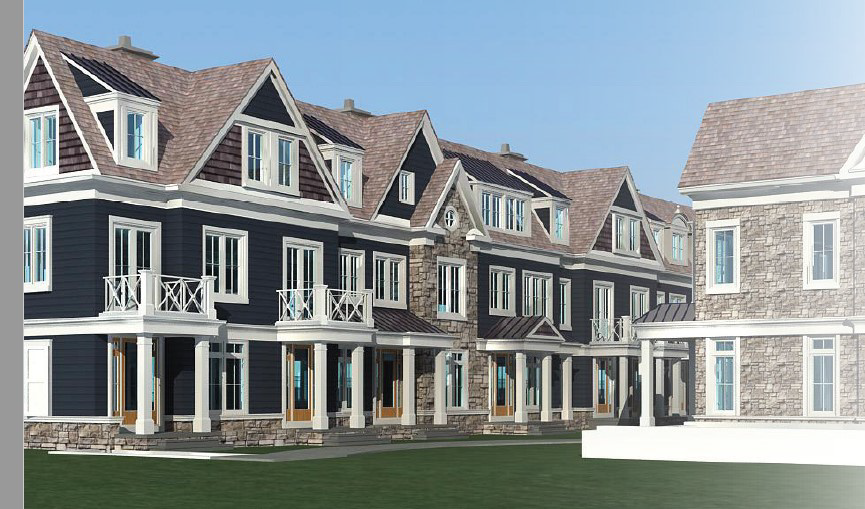 Queenscorp also had a very detailed Powerpoint presentation which contains photographs of the existing conditions of the property and what it looks like with the additional townhouses and detached house, with examples from one of their projects in Oakville.

During the PDC meeting Queenscorp (through their representative Tyler Grinyer from the planning firm Bousfield) cited the proximity to the GO station and future access to the Hurontario LRT as a major reason why they picked this particular location. The 17 townhouses would be traditional row townhouses, not the stacked or back-to-back designs. An underground parking garage was proposed and Grinyer said residents would have access from their parking spot to the basement of their units.

However, there was apparently some mischaracterization of Mineola West when Grinyer described it being “predominantly single family homes”, a phrase which Ward 1 Councillor Jim Tovey took issue with.

Tovey asked Grinyer to point out to him one house that isn’t a single family detached home. Tovey’s point was that Mineola West is for traditional single detached houses, and what the developer was proposing has never been done before in Mineola, meaning there’s no precedent for putting up townhouses in the area. Tovey also mentioned that with all the latest developments in Port Credit and Lakeview areas, the province said the PC region already met the density requirements, so any further developments that would meet ‘densification targets’ were not necessary.

After Councillor Tovey’s remarks to Grinyer several residents came forward and all of them said this application should be rejected for various reasons. But the main ones are as follows:

Mineola West is for single family homes only

A woman named Monica with diagrams of the neighbourhood showed that the small street that the developer planned to build those 17 townhouses on currently has only 30 houses, which was the equivalent to attempting to stuff an elephant in a coffee mug. A retired civil engineer named Mr. Batista sarcastically asked a few of his neighbours in the public gallery if they wanted to give up their property to accommodate maybe 120 townhouses.

Another resident named Carlo said the main point was that while Mineola is for residential property, historically there has never been anything like what Queenscorp is proposing ever (three storeys with multi-residential units and an underground garage). Carlo felt this would set a bad precedent for Mineola and would open the floodgates to other kinds of similar applications in the future.

While this may come off to the casual or average observer as “NIMBYism”, if you look at Queenscorp’s own renderings, it does look like it would be a tight squeeze from the narrow street that leads into them. It seems the only incentive to move there is because of the GO station, which brings me to the next point…

On the surface, while there is actual access to a road for the townhouse complex, residents said that it didn’t come with accommodating sidewalks, nor did it seem easily accessible for garbage trucks or, for that matter, emergency vehicles such as an ambulance or a fire engine.

One woman mentioned how the access route is so narrow, that if being next to a GO station was the main reason people would want to move here, you’d get additional vehicles parking alongside these small streets (Oriole, Inglewood, Vesta, Sandham) and literally blocking access for pedestrians or elderly people just going out for a walk. If there is anywhere in Mississauga that should have more pedestrian accessible places, it’s definitely the Port Credit area and surrounding environs.

The preservation of the Carolinian Forest

Various residents mentioned how Mineola is one of the last vestiges of Carolinian Forest in Ontario. The Carolinian Forest stretches from the Carolinas in the United States all the way up into southern Ontario. The types of trees that have been associated with the Carolinian include various species of ash, birch, chestnut, hickory, oak, walnut and tulip trees. Fruit trees native to this zone include the pawpaw. As for animal life, they include raccoons, opossums, squirrels (including the relatively rare southern flying squirrel), nuthatches, and chickadees.

Because the major population centres of Ontario are located nearby, there has been significant loss of wetlands and forested areas to urban areas and farms. It is estimated that 90 per cent of Canada’s Carolinian forest has already been destroyed by deforestation. The remaining portions, mostly scattered and disconnected, continue to be threatened by human development. Some of the best preserved areas of Canada’s Carolinian forest are located at Windsor’s Ojibway park and Rondeau Provincial Park and the Niagara Glen Nature Reserve.

With trends like that, it’s easy to understand why people in Mineola would be concerned with the removal of trees to justify this newly proposed townhouse development. It was interesting because even people in the most northerly parts of Mineola, who were nowhere near this site, came to the public meeting to voice their opposition to it. Batista said trees have already been cut down, even though the application hasn’t been approved yet.

Mr. Batista alleged that Queenscorp really didn’t follow the correct planning procedures laid out by the city. Batista said the first two times the developer met with the residents, they offered marketing pitches. After the company said it would take the residents’ suggestions into consideration, it appealed to the OMB—something Batista said flouted protocol.

It appears the company became impatient with the city. The corporate report from PDC even stated that “the applications have been appealed to the OMB by the applicant for failure by City Council to make a decision on the applications within the prescribed timeframes.”

Although residents have a reputation for saying no to almost everything, it’s important to look at the area. Looking at all the development proposals coming out of Port Credit lately, it’s not as though people have been going all out NIMBY and fighting development. But developers need to better communicate what their plans are to residents before bypassing citizens and council and appealing directly to the OMB.

This is only the beginning of the process for this application and no concrete decision has been made. But from an outsider’s perspective, I don’t think the Queenscorp proposal fits well. Looking at the proposed entrance of the townhouse complex, it just seems as though they decided to put it there because the GO station is nearby. On the surface it makes sense if you want more people to take transit, then build near the transit nodes. But this development’s only rationale to be on this site seems to be the closeness to the GO station.

There may be some merit to keeping mature trees around for future generations to enjoy the property and maintain the character of the neighbourhood, but what do you think Mississauga? Is this a good location for these townhomes?

Header photo courtesy of Queenscorp.com. It is a rendering of their standard townhouse complex design, from their Stonewater project across from Marie Curtis Park.

Once destroyed by fire this restaurant is now reopening in Mississauga
Naan & Kabob is returning to Mississauga, just under four years after losing a location in a fire that engulfed an entire plaza.
END_OF_DOCUMENT_TOKEN_TO_BE_REPLACED